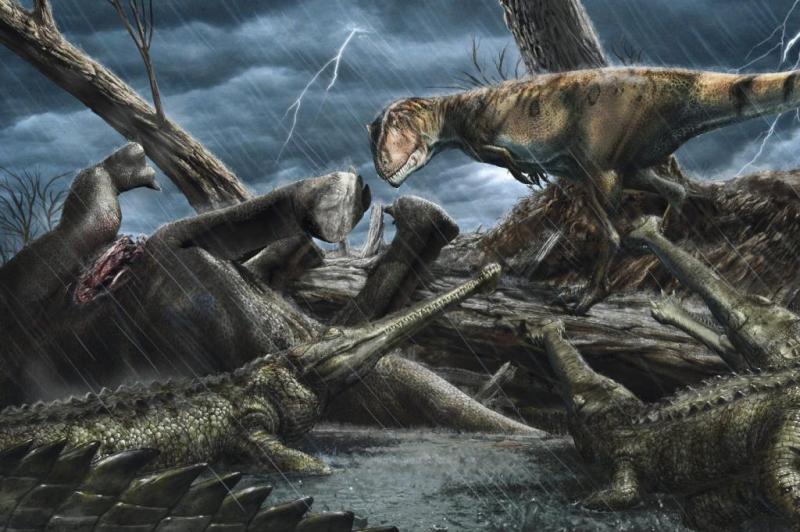 April 24 (UPI) — Today, the Sahara is one of the most unforgiving places on Earth. It is hot, barren and host to blinding dust storms.

More than 100 million years ago, the Sahara was equally dangerous — the most dangerous place on the planet, new research suggests — but for much different reasons.

Recent excavations of Cretaceous rock formations in southeastern Morocco have revealed the remains of dozens of ferocious predator species, including flying reptiles and crocodile-like carnivores. The remains belong to portion of the fossil record that paleontologist call the Kem Kem Group.

At the beginning of the Late Cretaceous period, 100 million years ago, the Sahara was home to a vast river system, providing habitats for a diversity of terrestrial and aquatic species.

As scientists detailed in a new paper published this week in the journal ZooKeys, the Kem Kem Group included some of the largest predatory dinosaurs to ever walk the planet.

The saber-toothed Carcharodontosaurus stretched more than 26 feet in length and could crush and rip apart prey using its enormous jaws and serrated, knife-like teeth, some of which measured up to eight inches in length.

The similarly long but markedly more slender Deltadromeus boasted a physique that made the predator speedier and more agile than other large dinosaurs, making it adept at chasing down prey.

The two fearsome predators were joined by a variety of flying reptiles called pterosaurs and an abundance of crocodile-like predators.

“This was arguably the most dangerous place in the history of planet Earth, a place where a human time-traveler would not last very long,” lead study author Nizar Ibrahim, an assistant professor of biology at the University of Detroit Mercy and a visiting researcher at the University of Portsmouth in Britain, said in a news release.

Underwater, the ancient Sahara was equally terrifying for vulnerable prey.

“This place was filled with absolutely enormous fish, including giant coelacanths and lungfish,” said study co-author David Martill from the University of Portsmouth. “The coelacanth, for example, is probably four or even five times larger than today’s coelacanth. There is an enormous freshwater saw shark called Onchopristis with the most fearsome of rostral teeth, they are like barbed daggers, but beautifully shiny.”

In order to provide a clearer window into Africa’s Age of Dinosaurs, Ibrahim, Martill and their colleagues studied Kem Kem Group deposits on several continents.

“This is the most comprehensive piece of work on fossil vertebrates from the Sahara in almost a century, since the famous German palaeontologist Ernst Freiherr Stromer von Reichenbach published his last major work in 1936,” Martill said.