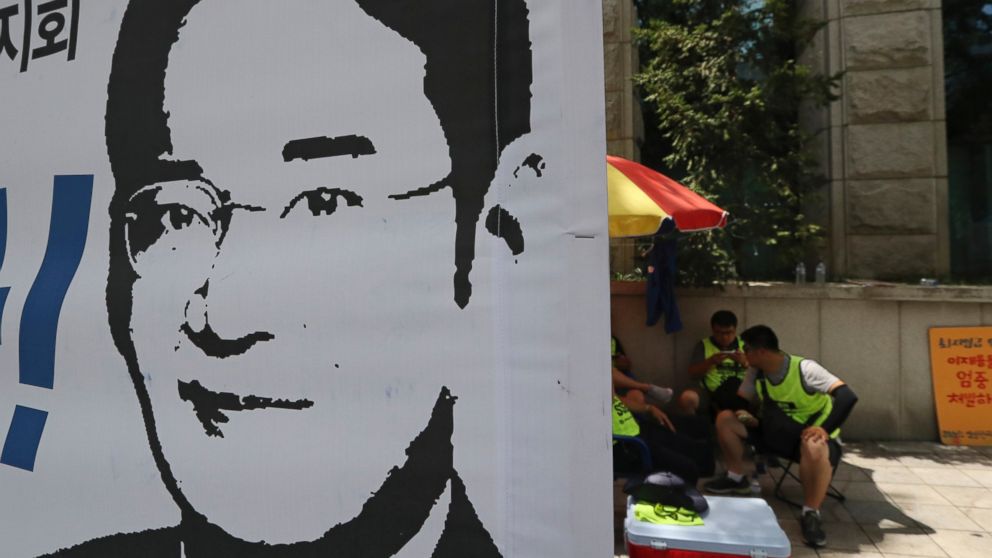 Lee, 49, was groomed to lead the conglomerate that was founded by his grandfather and became such a dominating force in South Korea that it’s mockingly called “Republic of Samsung” by the public.

He took a higher profile role at the world’s largest maker of smartphones, television sets and microchips that power consumer electronics after his father suffered a heart attack in 2014 and was poised to cement control. Instead, at the end of last year Lee was implicated in a massive political scandal that culminated in President Park Geun-hye’s ouster.

The court said he was guilty of offering bribes to the former president and her close friend Choi Soon-sil to facilitate a smooth handover of power at Samsung, which is a publicly traded company. Park and Choi are also on trial. A Samsung lawyer said the guilty verdict would be appealed.

HAS LEE LOST HIS HOLD ON SAMSUNG?

It’s almost a rite of passage for the bosses of family-controlled South Korean conglomerates known as chaebol to go to prison for white collar crimes only to later make a comeback. Some were pardoned and others got sentences reduced on appeal.

Lee’s own father was twice convicted for tax evasion but received a special presidential pardon so he could help South Korea win its bid to host the Winter Olympics for the first time.

But the princeling’s case may be different because the public is increasingly unwilling to indulge the double standards long enjoyed by families who were lionized a generation ago for helping to turn South Korea into a manufacturing powerhouse.

The ousted Park’s replacement as president, Moon Jae-in, was elected on hopes his administration would end cozy ties between government and business and end the emperor-like rule of chaebol families.

“It’s an entirely different world now,” said Park Sang-in, a professor at Seoul National University. “The public’s perception of the problems at chaebol and the need to reform chaebol has significantly changed.”

Perceptions of Lee’s business competency have also been damaged by the trial. To insist on his innocence, he gave testimony that made him appear clueless and not in charge.

“He was stumbling, stammering, unsure of the basic functions of his own company and its offices,” said Geoffrey Cain, the author of an upcoming book on Samsung.

HOW HAS THE PUBLIC REACTED?

Many expected Lee would get a prison sentence because the judiciary has been criticized for past leniency toward major white collar crime. Lee’s sentence is among the longest prison terms ever handed out in South Korea to a member of a prominent business family. Usually they get suspended sentences or pardons.

Civic groups said sentencing Lee to prison time was a meaningful step toward justice. But others thought the punishment was too light.

“I think the court should have accepted prosecutors’ request for 12 years in prison,” said Choi Sukun, a 37-year-old teacher in Seoul. “Given the gravity of the case, I think the ruling is too generous.”

Business lobby groups, while refraining from openly criticizing the verdict, expressed concerns that Lee’s absence from the helm of Samsung would take a toll on the South Korean economy, given Samsung accounts for about one fifth of the nation’s exports.

“Samsung Electronics represents South Korea as a global company so we are deeply worried about the fallout from his long absence,” said a spokesman at the Korea Employers Federation, a pro-business lobby group. “It will be a disaster not just to an individual company but to the nation’s economy.”

But South Korea’s presidential office took the verdict as a step forward, issuing an unusual commentary on a court ruling. “We hope that it would pave the way to end persistent government-business collusion,” a presidential spokesman said, according to Yonhap.

IS SAMSUNG’S FUTURE IN JEOPARDY?

Samsung Electronics, the crown jewel of the Samsung group, has reported record profits despite Lee’s arrest in February and a damaging recall for Galaxy Note 7 phones that were prone to battery fires.

The financial success was largely thanks to events set in motion by Lee’s father in the 1990s. The elder Lee made the decision to break into the memory chip industry and followed up with massive and risky investments that rivals could not match every year.

Those investments are paying off. Samsung, the world’s largest maker of memory chips for servers, mobile devices and computers, was the biggest beneficiary of supply constraints and explosive demand for mobile devices that pushed up prices. The boom in the memory chip industry is expected to last a couple of years.

Longer term, however, some analysts see risks for Samsung and its flagship Samsung Electronics.

“South Korea’s chaebol system is similar to monarchy,” said Park, the Seoul National University professor. “In the monarchy system, you need a king.”

There is also potential for a destabilizing family feud over inheritance when the elder Lee dies.

“Samsung was in the middle of change and that has stopped,” said Park Ju-gun, chief executive at CEO Score, a private corporate watchdog. “That is a big risk.”

But one tech analyst in the U.S., Carolina Milanesi of Creative Strategies, doubts the imprisonment will knock the company off its perch as the world’s leading maker of smartphones. That’s because key decisions about Samsung’s smartphones are already being made by DJ Koh, who will remain in his role as president of the company’s mobile division.