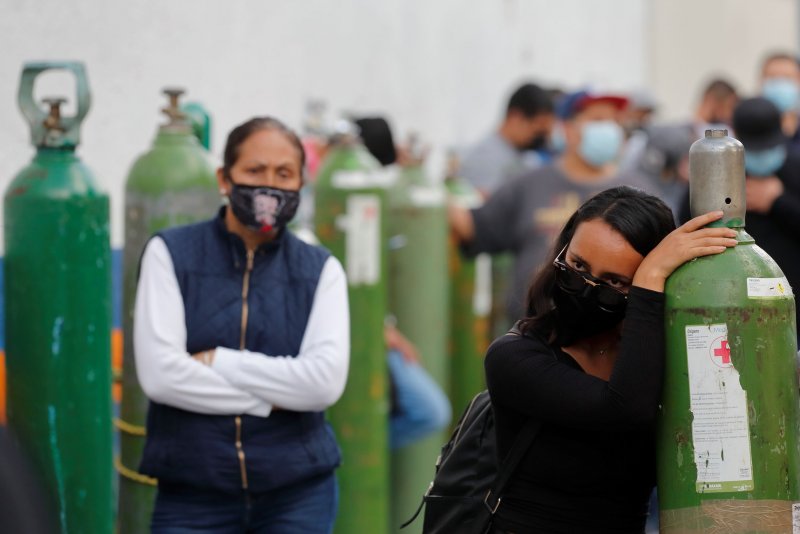 Jan. 24 (UPI) — The coronavirus pandemic has been surging to record daily deaths and cases in Mexico, straining the resources of hospitals and morgues despite a nationwide vaccination plan.

Mexico is among the nations grappling with a pandemic that has reached 2,134,449 deaths and is just shy of 100 million cases at 99,538,884 cases worldwide, according to tracking by Worldometers.info.

Cases and deaths are surging despite the beginning stages of vaccine distribution as well as restrictions, including lockdowns. Many nations have issued a travel ban, including Israel which on Sunday vote to ban all international passenger travel to and from its airports starting at midnight Monday. That includes Ben Gurion in Lod, near Tel Aviv, which handled 24.8 million passengers in 2019. Flights for cargo will continue.

But as with deaths, infections have been surging lately.

Until late November, the record was 1,128 in June.

The surge has been blamed on the Christmas holiday, New Year’s Day and Three Kings Day on Jan. 6, when many families gathered in large groups.

“It’s a giant snowball,” Dr. Laurie Ann Ximenez-Fyvie, who runs the microbiology laboratory at the National Autonomous University of Mexico, told the Reforma newspaper. “What’s happening right now is a perfect storm, the result of three holidays each a week apart.”

With the spike, hospitals are near capacity and equipment, including ventilators and oxygen tanks are scarce.

“In the end you’re just stacking people in piles,” said Dr. Giorgio Alberto Franyuti Kelly, chief of biosecurity for the military, who treats patients at a makeshift hospital in Mexico City, told the Los Angeles Times.

The situation is dire despite an inoculation program — the first nation in Latin America to begin it on Dec. 24 and mainly carried out by the military. But despite a government goal of 1.5 million shots given by the end of the month, the nation has administered just 766,350 doses of vaccine produced by Pfizer-BioNTech.

Pfizer says it is falling behind its goal because it is remodeling one of its factories in Europe.

“It is simply going to be temporarily postponed,” said Mexico’s undersecretary of health, Dr. Hugo López-Gatell, who is leading the nation’s pandemic response.

Like Mexico, Canada has had vaccine supply issues. The nation of 38 million people had preordered enough vaccines for all of them. But Canada has administered about 684,000 doses, meaning about 1.8% of the population received at least one of the two shots, according to the Bloomberg Vaccine Tracker.

The travel ban between Mexico, the United States and Canada, for non-essential travel is in effect through Feb. 21. It’s been that way since March.

All but around 22,000 of the total deaths in North America are in Mexico, Canada and the U.S.

The Western Hemisphere has six of spots in the top 20 for most deaths.

South America’s are Brazil, Colombia in 12th with 50,982, Argentina in 13th with 46,737 and Peru in 15th with 39,608. On Saturday, Brazil, amid nationwide caravans against President Jair Bolsonaro‘s handling of the pandemic, began rolling out 2 million doses of vaccine made by AstraZeneca in India. The nation has a deal to produce up to 100 million doses of the vaccine at Rio de Janeiro’s Fiocruz InstituteOne week earlier. Brazil began distributing the Sinovac Biotech Ltd vaccine from China.

Protesters, organized by labor unions and grassroots groups, want Bolsonaro to be impeached.

“With these caravans we demonstrate that it is possible to go into the street to protest despite the pandemic,” Carmen Foro, leader of the giant CUT labor federation, said Saturday in a report by La Presena Latina Media. “This government has already committed too many crimes against the Brazilian population and we cannot remain silent.”

Coronavirus continues to surge in Europe which set records in the spring, subsided in the summer and then surged again.

Among large nations, Britain has the highest death rate of 1,438 fatalities per million population. The world average is 273.8 and the U.S. at 1,288.

“Officers were forced, yet again, to put their own health at risk to deal with a large group of incredibly selfish people who were tightly packed together in a confined space — providing an ideal opportunity for this deadly virus to spread,” Chief Superintendent Roy Smith said in a statement. “Our frontline officers continue to police this public health crisis with compassion & professionalism but it is completely unacceptable they have to face such needless risks to their own health and to their families too.”

“There is early evidence that the lockdown is starting to bring cases down,” he said on Sky News. “But we’re a long, long, long way from that from being low enough because the case rate was incredibly high and you can see the pressure on the NHS. You can see it every day.”

Hancock said more than three-quarters of over-80s have been vaccinated, and a similar number in care homes.

In all, nearly 6 million of the 67 million population have been vaccinated.

In Italy, the nation also is dealing with supply issues of the Pfizer-BioNTech vaccine, and is threatening legal action.

“Protecting the health of Italian citizens is not negotiable,” Domenico Arcuri, the special commissioner for the pandemic, said in a statement late Tuesday.

Along with other European Nations, vaccinations began Dec. 27.

Portions of Italy have been under a lockdown, including the region of Lombardy, the island of Sicily and the autonomous province of South Tyrol in “red zones.”

In France, officials are studying whether to go back into lockdown. Last week the nation went into a longer national curfew from 6 a.m. to 6 p.m. compared with the former 8 p.m. to 6 a.m.

Spain doesn’t have national restrictions but several regions have tough restrictions, including a curfew, after easing the rules during the holidays. Spain doesn’t report data on weeks with the last figures Friday of 400 deaths, with the record 996 April 2, and 42,885 cases one day after record 44,357.

Russia has developed its own vaccine, called Sputnik 5.

Also, Russia’s republic of Bashkortostan will introduce COVID-19 vaccine passports from Feb. 5, Governor Radiy Khabirov announced. They will be exempt from certain restrictions, including social-distancing measures and self-isolation orders issued for at-risk groups.

Until the spike, the record for most deaths reported in one day was 333 on April 8.

A lockdown will remain in place through Feb. 14.

“The numbers of the last few days are encouraging,” Germany’s health minister, Jens Spahn, said last week during a news conference. “They’re going in the right direction. The infection rate is sinking. We’re seeing the first easing on intensive care wards … but it’s still a considerable burden with very many COVID-19 patients in the intensive care wards and in hospital.”

“But the numbers are still too high, and what we need is to collectively use the intensified measures, despite the many hardships they bring with them, to continue to suppress the numbers … so that this virus is controllable.”

In the Netherlands, police arrested at least 30 people, and used tear gas and a water cannon to disperse a crowd of several hundred people protesting coronavirus rules. Demonstrators threw fireworks and golf balls at the police on the 18 Septemberplein in Eidhoven,

In Asia, where the pandemic originated in Mainland China, the death toll is 364,361, the fourth-most of the continents, and cases are 22,564,504, which ranks third.

China is now ranked 47th in the world with 4,635 behind Croatia. The first cases, which originally were described as pneumonia, were reported on Dec. 31.

One week ago Thursday, the first death was announced since April 27, not including a new verification on May 17 for a total of 4,635.

On Sunday, China reported 80 cases after earlier this year four days of triple digits, including 144, which was the most since 202 on March 1.

China has been on high alert for another COVID-19 outbreak wave, ahead of the Lunar New Year, which is Feb. 12.

On Saturday, Hong Kong for the first time has imposed a temporary lockdown on residents in coronavirus hotspots affecting 10,000 people.

On Sunday, Hong Kong recorded 76 new Covid-19 infections and one death for a total of 169.

Asian nations in the top 10 for deaths are India in third and Iran with 57,383 deaths, including 89 Sunday.

In Israel, travelers will be prevented from entering or leaving the country, starting Monday after midnight, except for situations approved by special committee. The ban approved Sunday includes new immigrants, marking the first time under the Law of Return entry has been halted in the history of the country.

“We are sealing our skies, except for limited exceptions, in order to prevent the entry of the virus mutations, and also to ensure that we progress quickly with our vaccination campaign…so that more Israelis are vaccinated soon,” Prime Minister Benjamin Netanyahu said during the meeting.

On Sunday, India reported 155 new deaths, compared with a national-record 1,299 in the summer. Cases were 14,849 compared with a record 97,859, also this summer, and the nation ranks second in the world, with a total of 10,654,533. Cases and deaths have been steadily decreasing recently.

India plans to vaccinate 300 million of its 1.5 billion residents by August. But so far, the nation had inoculated on 1.5 million after one week. Serum Institute of India Ltd. is shipping its vaccine to other nations.

“We are sealing our skies, except for limited exceptions, in order to prevent the entry of the virus mutations, and also to ensure that we progress quickly with our vaccination campaign…so that more Israelis are vaccinated soon,” Prime Minister Benjamin Netanyahu said during the meeting.

The pandemic has largely been controlled in Far East nations, including Japan and South Korea.

Japan continues to remain hopeful of hosting the Summer Olympics, which already were delayed one year.

On Friday, Prime Minister Yoshihide Suga told the government they are “considering specific anti-virus measures” for a safe Olympics.

Tokyo is among the area in Japan under a state of emergency.

In Africa, South Africa has been dealing with a surge, including a variant, which is considered more contagious like one also in Britain. The variant was first spotted in South Africa in October.

Nations have suspended flights in and out of South Africa this month, cutting travel to its sandy beaches in Capetown.

New Zealand reported 7 cases Sunday, tallying 27 in one week, for a total of 2,283, including its first community transmission Sunday in more than two months, and Australia was up five Sunday for 28,766, an increase of 58 in seven days.

The borders of New South Wales, which includes Sydney, are open to every state and territory.