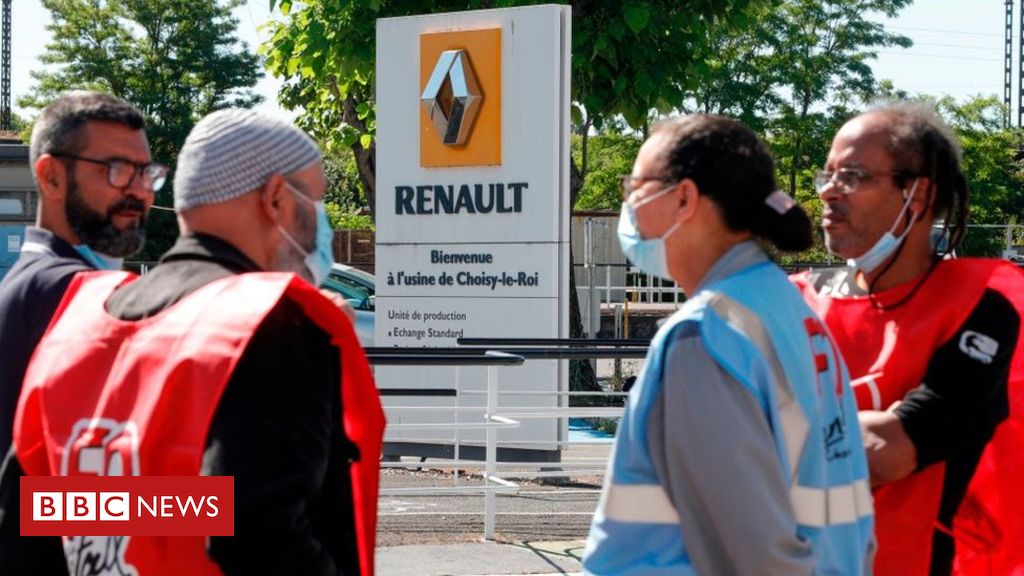 Renault is cutting 15,000 jobs worldwide as part of a €2bn (£1.8bn) cost-cutting plan after seeing sales plunge because of the virus pandemic.

Some 4,600 job cuts will be in France, and the firm said on Friday that it had begun talks with unions.

Renault, 15% owned by the French state, said six sites are under review.

The company is slashing costs by cutting the number of subcontractors in areas such as engineering, reducing the number of components it uses, freezing expansion plans in Romania and Morocco and shrinking gearbox manufacturing worldwide.

The French firm plans to trim its global production capacity to 3.3 million vehicles in 2024 from 4 million now, focusing on areas like small vans or electric cars.

Renault is part of a three-way alliance with Nissan and Mitsubishi. On Thursday, Nissan said it would close its factory in Barcelona with the loss of about 2,800 jobs in a bid to cut costs, prompting protests at the Spanish plant.

Cost-cutting measures announced by both Renault and Nissan mark a departure from the ambitious expansion plan devised by now-ousted leader of the alliance, Carlos Ghosn.

Renault’s interim chief executive Ms Delbos said during a press conference on Friday: “We have to change our mindset.

“We’re not looking to be on top of the world, what we want is a sustainable and profitable company.”

Ms Delbos added that Renault would review each region in order to decide where job cuts will fall. “This will help us come back to our ideal size,” she said.

Both Nissan and Renault were already facing falling sales before the Covid-19 outbreak worsened trading.

Renault’s sales were down 3% last year and the number of vehicles sold in the first three months of 2020 fell by 25%, before dropping further in April.

The struggling firm is currently in talks with the French government over a €5bn emergency loan package.

The French government has also pledged €8bn in wider rescue funds aimed at shoring up the country’s car industry. In exchange, President Emmanuel Macron had said Renault should keep workers and production in the country.

We’re coming “back to bases” was how Renault euphemistically portrayed its retrenchment after seeing a collapse in sales and profits. Former Renault chief Carlos Ghosn had targeted 5 million car sales by 2022. Today’s restructuring sees the company cut maximum production capacity to 3.3 million vehicles by 2024.

The news does more than rip up Renault’s previous strategy. It reveals more of the shape of the Renault-Nissan-Mitsubishi alliance. While they will co-operate on cutting costs, each company will take the lead on certain new-car developments.

And there’s a geographical split: Renault focusing on Europe and Russia, Nissan on China, Japan and the US, and Mitsubishi on South East Asia. The days when the carmakers were tipped to merge into one global titan are long gone.

Presenting the plan is the easy bit; far more difficult is the execution. Renault has too many brands, and was slow to capitalise on growing markets. Its cost base is high. French rival PSA, for example, uses the same engines, chassis and gearbox on most small cars. Renault’s technical base is not as efficient.

And it was telling that Renault did not say which French sites would shut. Among the 15,000 job cuts worldwide is 10% of Renault’s domestic workforce. The government has still to sign off on a loan to Renault, so there will be hard bargaining with the unions before the money is handed over.

That might explain why Renault today played down reports it could put some production into Nissan’s UK plant at Sunderland. Having French taxpayers help prop up a company that then creates jobs in the UK is not a good look.