Planning to reinvest those pesky required withdrawals from your individual retirement account or 401(k) plan because you don’t need the money?

Under the Secure Act, a bill pending in Congress right now that aims to improve the nation’s retirement savings, you’d have to start taking withdrawals from your IRA (and most other retirement accounts) at age 72 instead of 70 ½.

The kicker: Due to the reduced time that the reinvested cash would have to grow, its value over time could be smaller under the proposed change than under current law.

Allocating expenses into needs, goals and aspirations can help provide a better framework for managing your cash flow and living comfortably.

The chart below shows that for a theoretical IRA worth $ 500,000 at age 70, the reinvested required minimum distributions — assuming 4% annual growth after taxes — would be worth $ 568,864 at age 89 under current law.

That’s $ 15,850 more than the $ 553,014 that would amass in the reinvested RMD account if the required withdrawals started at age 72, applying the same assumptions. 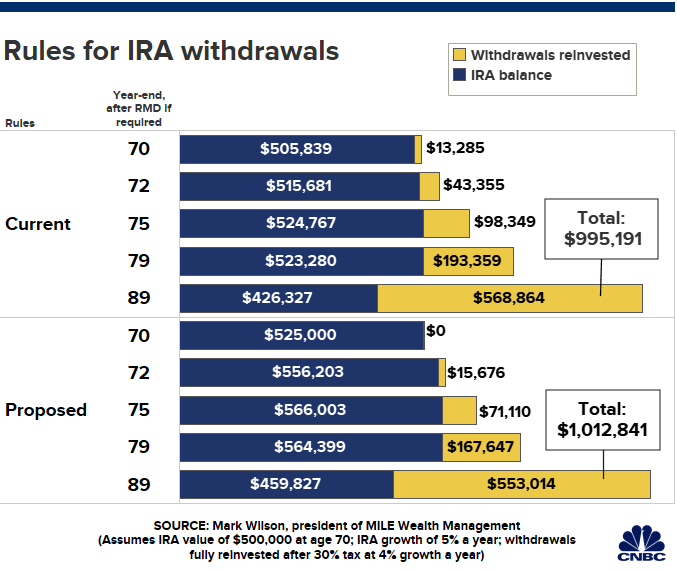 Combined with the theoretical IRA’s value at age 89 — growing at 5% annually while RMDs are going out — a retiree would end up faring better under the proposed law, though not by a life-changing amount: $ 17,650 more.

The Secure Act was passed by the House of Representatives in late May and now awaits Senate action. In addition to increasing the age for RMDs, the bill would make it easier for small businesses to band together to offer 401(k) plans; require businesses to let long-term, part-time workers become eligible for retirement benefits; and repeal the maximum age for making contributions to traditional individual retirement accounts (right now, it’s 70 ½). It also would make it easier for annuities to be offered in retirement plans.

While the goal of the Secure Act is to increase the ranks of retirement savers and the amount they save, it also would throw a wrench into financial planning by changing the rules that apply to inherited retirement accounts — the so-called stretch IRA. It would require most non-spouse beneficiaries to withdraw the money within 10 years of the original account owner’s death.

Right now, the amount that must be withdrawn by those beneficiaries is based on their own life expectancy — which often is far longer than a decade.

Meanwhile, a later RMD age could potentially allow wealthier people extra time to do some tax planning to minimize the impact of those withdrawals when they do need to take them.

For example, some advisors recommend moving money to a Roth IRA from a traditional IRA or 401(k). While you’d have to pay taxes on the amount converted, you’d pay no taxes on those Roth withdrawals down the road.

And you can spread that conversion over several years to minimize the annual tax impact. A later RMD age would provide some extra time to make those Roth conversions.

More from Personal Finance:
Retirees lose $ 3.4 trillion by claiming Social Security too early
Social Security statements could come back to your mailbox
Medigap changes coming next year for future 65-year-olds