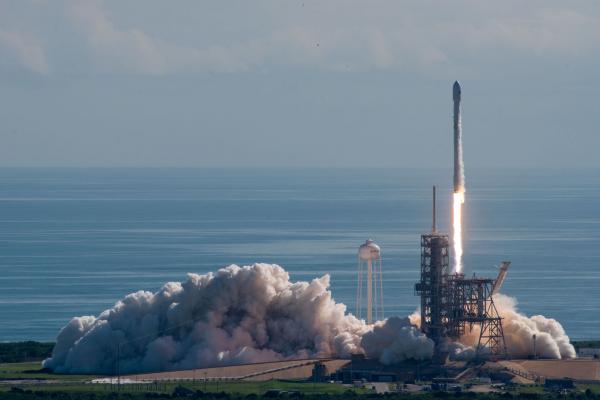 Oct. 11 (UPI) — A used Falcon 9 rocket landed on a droneship in the Atlantic ocean Wednesday after launching a communications satellite into orbit.

It was the third time SpaceX depended on a used Falcon 9 rocket to carry out a launch mission.

The rocket blasted off at 6:53 p.m. from Kennedy Space Center in Florida.

The Falcon 9 rocket previously was used to deliver cargo to the International Space Station in February. This time, the rocket carried a high-powered, hybrid communications satellite shared by SES and EchoStar. The satellite is expected support the delivery of high-definition television broadcasts to viewers across North America.

“Falcon 9 first stage has landed on “Of Course I Still Love You” — third successful mission with a flight-proven orbital class rocket,” SpaceX said on Twitter.

“The satellite will be deployed approximately 36 minutes after liftoff,” SpaceX said.

The space company hopes to fly more used rockets in the coming months as it works to further reduce the cost of space travel. SpaceX successfully flew a mission with a used rocket for the first time in March. A second attempt in June also proved successful.