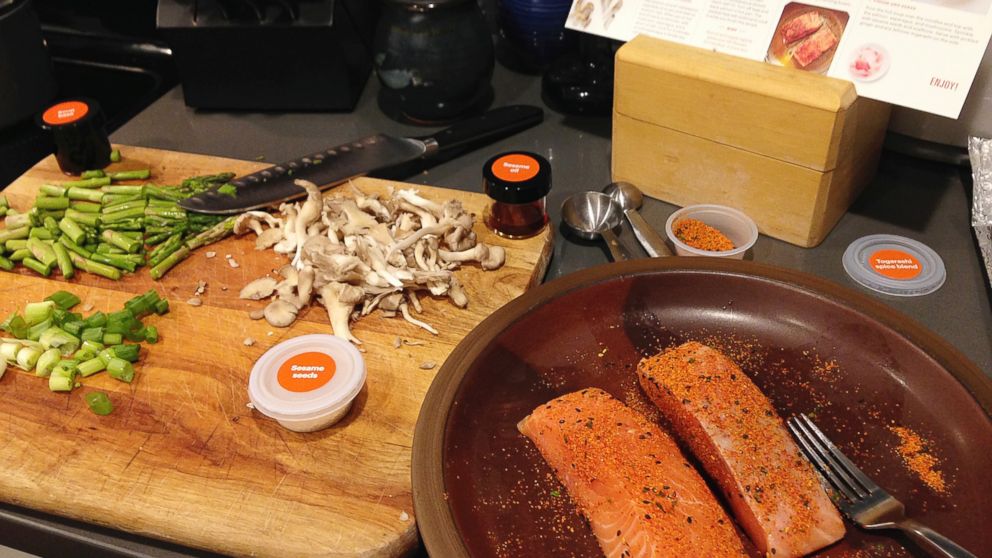 Amazon’s new ready-to-eat meal package is the perfect recipe for someone who doesn’t have enough time to shop and cook, yet has a healthy appetite and a need for balanced meals.

These meal kits come with just about everything you need to prepare dinner for two. You can choose from a variety of vegetarian and meat options. For now, Amazon’s meal kits are available only in limited markets, including Seattle.

There’s no major commitment, the way rivals require you to order an entire week of meals at a time. But you pay dearly for the convenience and flexibility, and you must plan ahead, at least for now.

As a competitive athlete who trains a lot, I find generous portions are almost as important as lots of protein. I usually don’t eat red meat, and the chicken dish got a few bad reviews, so I went for Togarashi-spiced salmon with soba noodles. It was $ 20 for two servings, plus $ 10 for delivery.

When I tried to place my order Tuesday, Amazon said the only delivery times left that day were for 6 p.m. to 8 p.m. Before confirming the order, though, those slots were gone.

I could have gone to Amazon’s pickup location in another part of town, but who has time for that, especially in Seattle traffic? Instead, I chose delivery before 7 a.m. on Wednesday. It arrived before 5:30 a.m., as I headed out for a long morning run.

FROM DOOR TO KITCHEN

The meal kit was the size of a loaf of bread, but it came in a heavy bag that resembled a large paper grocery bag. Inside was a silver insulated bag, nestled inside a cardboard frame, and six ice packs. That’s a lot of packaging. I chose the delivery option that allowed the driver to leave it at my door, which may explain the extra layers.

Each item was individually wrapped and marked. All I needed were a few pots and pans, a knife and some vegetable oil. The recipe also called for a pinch of salt from my kitchen, but I didn’t feel the need. The ingredients you had to supply on your own were reasonable, given that most kitchens would have these. Everything else was provided, including some sesame oil in a tiny container to saute my veggies.

A MEAL IN A HALF-HOUR

I sauteed the asparagus and oyster mushrooms and cooked the salmon. I cooked the soba noodles and edamame together in boiling water, while I warmed the soup base in a separate pot. Once done, I arranged the noodles, edamame and salmon on plates and sprinkled each with asparagus, mushrooms, scallions and sesame seeds. The meal includes a side of pickled ginger.

The recipe was easy to follow. I am an OK cook and have a few special dishes, but I find recipes often take a convoluted path from stove to table. This one had seven easy steps, such as boil the water.

All this took less than 30 minutes, as promised. After about 10 minutes of washing veggies, chopping and opening packets, the cook time was minimal, just 13 minutes. Setting the table and opening the wine were the only other tasks.

The servings were surprisingly large and visually appealing. Add a few glasses of white wine, and the meal was the perfect end to a very full day.

I’ve been curious about meal kits for some time, but rivals such as Blue Apron and HelloFresh require you to subscribe to ongoing deliveries and pick your meals a week in advance. I wasn’t willing to commit to $ 60-plus per week for a multi-meal plan without first trying out the concept.

Amazon lets you buy as you go, even spontaneously, notwithstanding the limited delivery windows. And the per-serving price is comparable with rivals — with a catch .

Meal kits require membership in both Amazon Prime ($ 99 per year) and AmazonFresh ($ 15 per month). Those fees along with the $ 10 delivery fee should be factored into the overall price of each meal, which range from $ 16 to $ 20 for two servings.

Amazon offers free delivery for orders over $ 40, but you lose freshness if you buy multiple meals at once. Instead, you could buy other groceries to qualify. AmazonFresh also has light bulbs and laundry soap.

Of course, it’s ultimately cheaper just to buy these ingredients separately and assemble the meal yourself. But if you buy a whole tray of mushrooms and throw away all but the two you eat, then it’s no longer cheaper. Nor is ordering takeout all the time, not to mention also being less healthy.

As someone who’s often too busy to cook elaborate meals, I’m hooked.

In fact, knowing I needed a few groceries and dinner, I went on AmazonFresh early Friday and was able to secure an evening delivery. I added milk, juice and bananas to get free delivery.