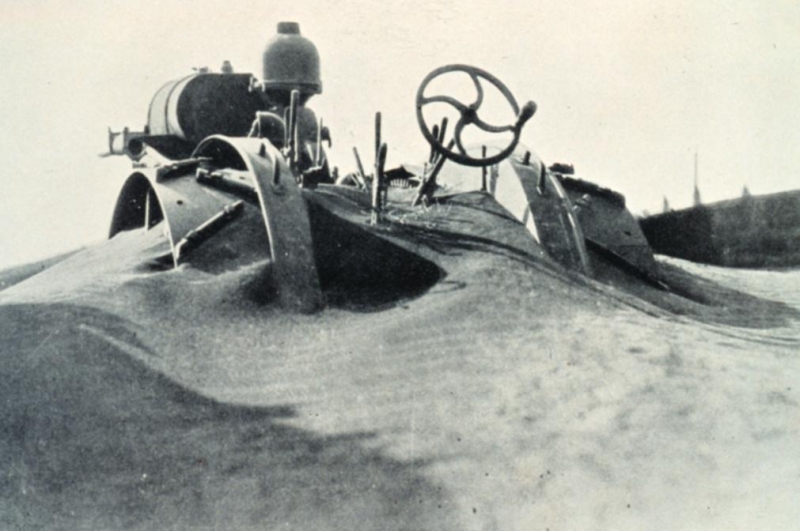 Oct. 13 (UPI) — Atmospheric dust levels are rising 5 percent per year across the Great Plains, according to a new survey by scientists at the University of Utah.

Authors of the new study suggest the phenomenon, if combined with drier climate conditions as a result of climate change, could yield conditions comparable to the Dust Bowl, the series of droughts and dust storms that devastated the Midwest during the 1930s.

“We can’t make changes to the earth surface without some kind of consequence just as we can’t burn fossil fuels without consequences,” lead study author Andy Lambert said in a news release.

“So while the agriculture industry is absolutely important, we need to think more carefully about where and how we plant,” said Lambert, a recent graduate of the University of Utah.

In the 1920s, farmers across the Great Plains converted massive amounts of grassland to farm tracts. When drought hit in the 1930s, extensive crop failures left newly plowed fields exposed to the wind, yielding waves of dust storms.

“These dust storms removed nutrients from the soil, making it more difficult for crops to grow and more likely for wind erosion to occur,” Lambert said.

Soaking rains eventually brought an end to the Dust Bowl, but much of the damage caused by erosion was permanent. Soils in some parts of the Great Plains have never recovered.

Three-quarters of a century later, around 2000, as demand for biofuels increased, farmers started clearing additional grassland to biofuel feedstocks.

Between 2006 and 2011, nearly 2,050 square miles of grassland across five Midwestern states was converted to farmland. Meanwhile, droughts have become longer and more across the Great Plains.

To gauge the risk of dust storms in the region, researchers amassed data from a variety of instruments designed to measure atmospheric haziness from both the ground up and space down. The data, from NASA satellites and two federally managed ground monitoring systems, showed the amount of dust in the atmosphere above the Great Plains has steadily increased over the last 20 years.

“The amount of increase is really the story here,” said study co-author Gannet Hallar, associate professor of atmospheric sciences. “That 5 percent a year over two decades, of course, is a hundred percent increase in dust loading. This is not a small signal to find.”

Scientists were also able to link rises in dust levels with crop expansion. Across Iowa, atmospheric dust increased predominantly in June and October, the planting and harvesting months for soybeans, the dominant crop. Across the southern Great Plains, where corn is more popular, the dust increases appeared in March and October.

“I think it’s fair to say that what’s happening with dust trends in the Midwest and the Great Plains is an indicator that the threat is real if crop land expansion continues to occur at this rate and drought risk does increase because of climate change,” Lambert says. “Those would be the ingredients for another Dust Bowl.”

Authors of the new study said their findings should serve as a warning to farmers and policy makers across the Midwest that proactive measures are needed to ensure history doesn’t repeat itself.