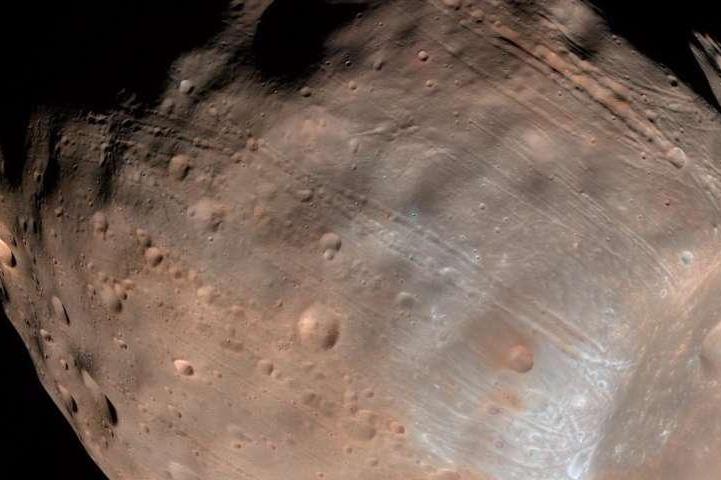 Nov. 20 (UPI) — Millions of years ago, rolling stones rocked the Marian moon Phobos. According to a new study, boulders put in motion by an ancient asteroid impact explain the grooves crisscrossing Phobos’ surface.

“These grooves are a distinctive feature of Phobos, and how they formed has been debated by planetary scientists for 40 years,” Ken Ramsley, planetary scientist at Brown University, said in a news release. “We think this study is another step toward zeroing in on an explanation.”

Ramsley and his colleagues designed a computer model to simulate the impact responsible for the Stickney crater, the large gash that marks one end of Phobos’ oddly shaped body. The model showed such a violent impact would have sent large pieces of debris tumbling across the lunar surface.

Scientists have previously theorized the grooves are evidence of the moon’s slow structural failure, a steady disintegration fueled by Mars’ gravitational pull. Others have argued the grooves were made by shrapnel expelled by impacts on Mars.

But the newest research — published in the journal Planetary and Space Science — suggests the Stickney crater theory is the most plausible explanation.

Until now, the Stickney crater theory had a variety of flaws.

Some grooves on Phobos are radially aligned with the Stickney crater, and some crisscrossing grooves feature imprints superimposed on top of one another. Additionally, a few grooves actually bisect the crater itself. There is also a portion of the lunar surface oddly free of grooves.

Ramsley reran his model to produce additional simulations with the hope of discovering explanations for such anomalies. Surprisingly, the model recreated several of the unusual and seemingly contradictory groove patterns.

“The model is really just an experiment we run on a laptop,” Ramsley said. “We put all the basic ingredients in, then we press the button and we see what happens.”

As the simulations revealed, Phobos’ weak gravity allowed some boulders to continue rolling for especially long distances, circling the entire moon, which explains why some grooves appear misaligned. As boulders crossed from the eastern hemisphere to the western hemisphere, their alignment would have shifted.

Additionally, boulders that completed an entire revolution around the globe could have crossed over older grooves on the tale end of their journey.

Finally, simulations revealed the area devoid of grooves is a low-elevation region abutted by a steep ridge. Boulders rolling off the ridge would have become airborne, leaving the low-elevation area unscathed.

“It’s like a ski jump,” Ramsley said. “The boulders keep going but suddenly there’s no ground under them. They end up doing this suborbital flight over this zone.”

Ramsey and his colleagues think the new model and its detailed simulations make a strong case that the Stickney impact and result ejecta best explain the moon’s odd grooves.