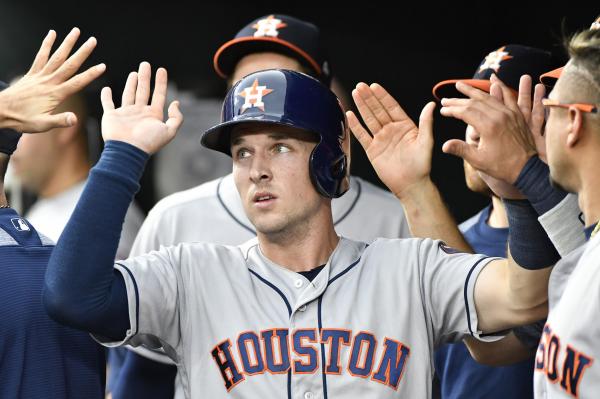 BOSTON — The Houston Astros kept Boston’s champagne on ice and also kept their own hopes for home-field advantage throughout the American League playoffs alive with a 3-2 decision over the Red Sox on Friday night.

Houston’s second straight win over the Red Sox kept Boston’s magic number for clinching the American League East at one, with the New York Yankees winning earlier in the day to stay alive. Still, one Boston win or one New York loss and the Red Sox have their second straight AL East title.

The Astros remained one game behind the Cleveland Indians for the league’s best record, a deficit that was in reality two games because Cleveland owns the tiebreaker thanks to a 5-1 season series win.

Alex Bregman had an RBI single and two-run homer among his three hits and Charlie Morton (14-7) and four relievers combined on a four-hitter in Houston’s fifth straight win. The Astros recorded their second 100-win season in franchise history.

Tanaka delivered the best start of his four-year tenure with the Yankees, who stayed alive in the American League East race. The Yankees, who will at the least host the Minnesota Twins in the wild-card game, are two games behind Boston with two to play.

Tanaka (13-12) joined Washington’s Stephen Strasburg as the second pitcher to notch 15 strikeouts in an outing this season. Tanaka faced two above the minimum and threw 68 of 103 pitches for strikes. It was the seventh time a New York starting pitcher struck out at least 15 and first instance Michael Pineda fanned 16 against the Baltimore Orioles on May 10, 2015.

CLEVELAND — Jose Ramirez had three hits, including his 54th and 55th doubles of the season, and Trevor Bauer pitched six strong innings as Cleveland routed Chicago.

Bauer (17-9) gave up one run on four hits with seven strikeouts and no walks. Chicago starter Mike Pelfrey (3-12) gave up all 10 of Cleveland’s runs in 2 2/3 innings, although three of the runs were unearned. Pelfrey allowed six hits, only one of them a single, and walked six.

Jay Bruce homered and Edwin Encarnacion had three RBIs for the Indians, who scored all of their runs in the second and third innings. Cleveland won its 101st game of the season, the second most in franchise history.

Zimmerman had doubles in his first two at-bats, then hit a two-run homer off A.J. Schugel in the sixth to give the Nationals a 4-0 lead. He then had a solo homer in the eighth off Dan Runzler to make it 5-0.

CHICAGO — Ian Happ slugged his 24th home run, a three-run shot in the eighth inning that helped Chicago to a come-from-behind victory over Cincinnati.

Lorenzen (8-4) took the loss after working two-thirds of an inning as the Reds (67-93) dropped their ninth in 10 games. Cubs reliever Brian Duensing (1-1) earned the win after working a scoreless eighth. Reliever Justin Grimm pitched a one-two-three ninth inning for his first save of the season.

ST. PETERSBURG, Fla. — As consolation prizes go, Tampa Bay earned one by locking up third place in the American League East with a win over Baltimore.

The Rays have been eliminated from playoff contention and assured of a losing record, but they now know they’ll finish ahead of the Orioles and Toronto Blue Jays. Third place represents their highest finish in the division since 2013.

The Rays got three runs on sacrifice flies, two in the seventh inning from Curt Casali and Brad Miller after a solo home run by Logan Morrison, his 38th of the season. Starter Jake Odorizzi threw four scoreless innings of two-hit baseball before leaving with knee soreness. Brad Boxberger (4-4) earned the win in relief with a scoreless fifth.

MIAMI — In a tale of two halves, visiting Atlanta scored early while Miami answered late for a comeback victory.

The Braves tallied four times in the first inning and added another in the second for a 5-0 lead. But the Marlins answered with two runs in the sixth and four more in the seventh inning.

Marcell Ozuna drove in three runs with a pair of hits and Justin Bour came up with a two-run single that proved to be the game-winner. Brad Ziegler came out of the bullpen and threw one pitch to earn the safe, coaxing a bases-loaded, game-ending double play.

PHILADELPHIA — Behind three home runs, Philadelphia beat New York on the same day it announced that manager Pete Mackanin will not be retained following the 2017 season.

Mackanin, like his Mets counterpart Terry Collins, will finish out the season as manager and could possibly have won his final game in a Phillies uniform on Friday.

Phillies starter Ben Lively (4-7, 4.26 ERA) closed his rookie season in the big leagues with a win, throwing six innings of two-run baseball without walking a batter. Matt Harvey (5-7, 6.70 ERA) took the loss, surrendering four runs while walking three and striking out three in his four innings.