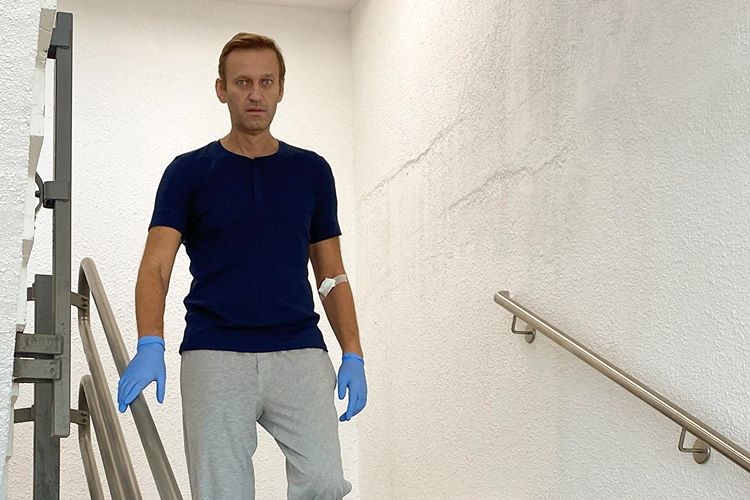 The Charite hospital in Berlin announced in a statement that Navalyn’s condition “had improved sufficiently” to warrant he no longer required acute inpatient care but warned that it was still too early to know the long-term effects of his “severe poisoning.”

“Based on the patient’s progress and current condition, the treating physicians believe that complete recovery is possible,” the hospital said.

The hospital said the decision to announce his release was made in consultation with Navalny and his wife.

Navalny had spent 32 days at the hospital, 24 of which were in the intensive care unit, after he was transported to Germany in August with suspected poisoning.

The staunch Putin critic and democracy advocate arrived in Germany on Aug. 22, days after he fell ill on a flight from Tomsk to Moscow, forcing the plane to make an emergency landing in Omsk where he was rushed to a local hospital in serious condition.

He arrived in Germany in critical condition via an emergency medical plane and was placed in a medically induced coma, which he awoke from earlier this month.

Officials have determined Navalny was poisoned with a nerve agent similar to the one used to poison a former Russian agent and his daughter in Britain two years later, attracting the condemnation from world leaders and demands that Russia hold those responsible to account.

However, the Kremlin has denied any involvement in his poisoning and Russian President Vladimir Putin reportedly suggested in a phone call with French President Emmanuel Macron that Navalny may have poisoned himself.

On Tuesday, Navalny mocked such a suggestion on Instagram, stating he concocted the plan to poison himself to make a fool out of Putin.

“But Putin outplayed me,” he said. “He just can’t be fooled. As a result, I, like a fool, lay in a coma for 18 days, but did not achieve my goal. The provocation has failed!”