Oct. 30 (UPI) — The New Orleans Saints on Friday ruled out wide receivers Michael Thomas and Marquez Callaway for the team’s Week 8 matchup against the Chicago Bears on Sunday.

Emmanuel Sanders, who remains on the reserve/COVID-19 list, also will miss the game, leaving the Saints without three of their top receivers this week.

All three players could return as early as next week for the Saints’ showdown with the Tampa Bay Buccaneers on Sunday Night Football.

Thomas has been sidelined since Week 1 due to a high ankle sprain, a suspension by the team and a hamstring injury that he suffered last week. According to the team’s final injury report, he returned to practice and was a limited participant both Thursday and Friday.

Meanwhile, Callaway sustained an ankle injury during his breakout performance last week against the Carolina Panthers. The undrafted rookie out of Tennessee caught eight passes for 75 yards in the Saints’ win. He also practiced on a limited basis Thursday and Friday.

In the trio’s absence, the Saints are expected to rely heavily on running back Alvin Kamara, tight end Jared Cook and receivers Tre’Quan Smith and Deonte Harris. The team also could decide to call up practice squad receivers such as Tommylee Lewis, Austin Carr and Juwan Johnson.

The Saints (4-2) have won three consecutive games entering their matchup against the Bears (5-2) on Sunday at Soldier Field in Chicago. 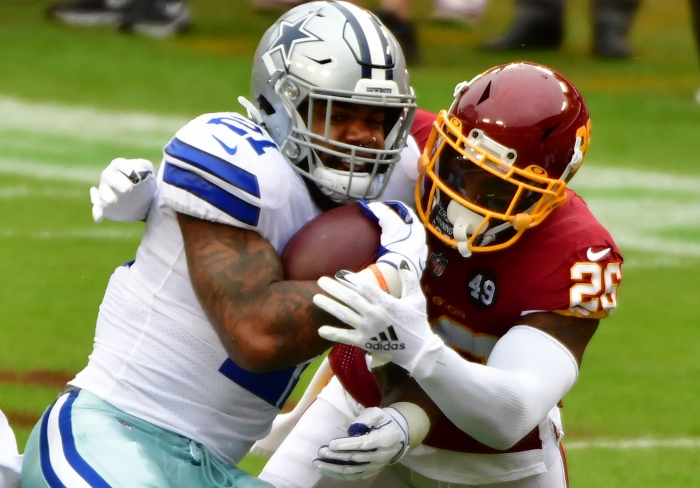 Dallas Cowboys’ Ezekiel Elliott (L) is stopped by Washington’s Landon Collins during their game at FedEx Field in Landover, Md., on Sunday, where the Cowboys lost to Washington 25-3. Photo by David Tulis/UPI | License Photo