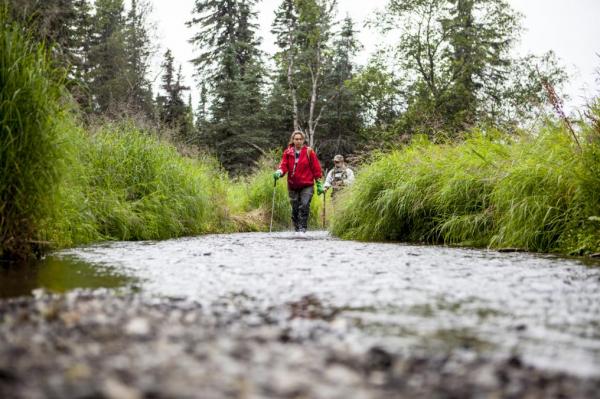 Oct. 23 (UPI) — A 20-year salmon study has helped birth a forest on the banks of a small stream in southwest Alaska. It turns out, carcasses of sockeye salmon encourage tree growth.

Every summer, thousands of sockeye salmon from Bristol Bay swim upstream, squeezing into the shallow upper reaches of Hansen Creek. They come to spawn and die. For two decades, researchers have been monitoring the salmon run — one of the largest in the world — and tallying the impact of bear predation on the population.

Each summer, during the height of the run, scientists walk the river and collected dead salmon, counting the causalities. To ensure they don’t double count any dead fish, researchers toss the carcasses onto the banks of the stream.

In the hopes the work might produce a measurable impact on the environment, Tom Quinn, a professor at the University of Washington, requested researchers only toss carcasses onto one side of the stream — the left side when facing downstream.

Between 1997 and 2016, scientists tossed 600,000 pounds of dead fish onto the left bank. According to the latest analysis, published this week in the journal Ecology, the carcasses did alter the environment.

“This study demonstrates the importance of salmon carcasses for the growth of trees, yet within the context of an area where the trees are growing very slowly, and where climate and other factors also play a part in their growth,” Quinn said in a news release.

“This study contributes to our understanding of the role of salmon in the ecosystem, but it also illustrates the importance of patient, careful, long-term research, and the educational benefits that result from such research in a university,” Quinn said.