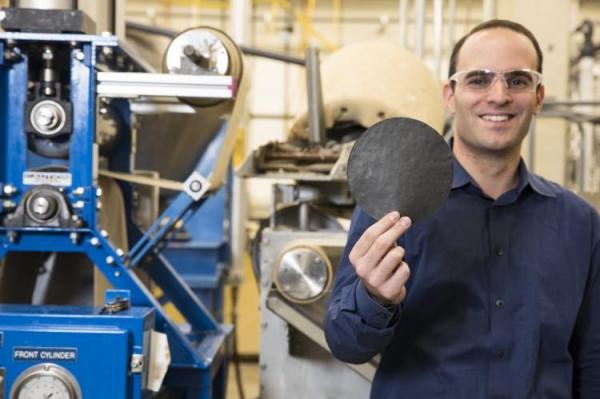 Nov. 7 (UPI) — Scientists at the University of Washington have designed smart paper capable of sensing water and conducting electricity. The paper could be used to detect water leaks in city pipes.

Even small leaks in a city’s maze of pipes can prove costly. Left alone, the problem can get worse. And finding the leak can prove timely. The American Water Works Association estimate leaks cause 250,000 water line breaks every year, costing public water utilities an annual sum of $ 2.8 billion.

Scientists hope their new smart paper can shrink those costs by making it easier to find and fix leaks.

The paper can sense the presence of water and conduct an electric current to sound an alarm or trigger a light, alerting maintenance authorities to the presence of a leak.

“Water sensing is very challenging to do due to the polar nature of water, and what is used now is very expensive and not practical to implement,” Anthony Dichiara, assistant professor of bioresource science and engineering at UW’s School of Environment and Forest Sciences, said in a news release. “That led to the reason to pursue this work.”

The technology originally came about by accident. Researchers were simply trying to make a paper capable of powering an LED light. When a few drops of water spilled onto their paper, the light was disrupted. The scientists thought they’d ruined their technology. In fact, they’d created water-sensitive paper.

The water swells the fibrous wood cells disrupting the current, but as the paper dries, the nanomaterials reform the conductive network.

The paper can also be designed to trigger a current when it detects water. Researchers believe the paper could be outfitted with a battery and wrapped around pipes or positioned between complex intersections of pipes. When the paper detects a water leak, a current will alert maintenance workers.

“I believe that for large-scale applications, this is definitely doable,” Dichiara said. “The price for nanomaterials is going to drop, and we’re already using an established papermaking process. You just add what we developed in the right place and time in the process.”

The carbon nanomaterials are composed of carbon atoms that can be extracted from a variety of natural sources. Scientists burned banana peels, tree bark, animal feces and even wood to create charcoal, from which carbon atoms can be extracted and incorporated into the paper making process.

“Now we have a sustainable process where everything is from pulp and paper, and we can make conductive materials from them,” Dichiara said.

Researchers described their discovery in a new paper published the November issue of the Journal of Materials Chemistry A. Next, scientists hope to test their technology using industrial paper-making machinery.