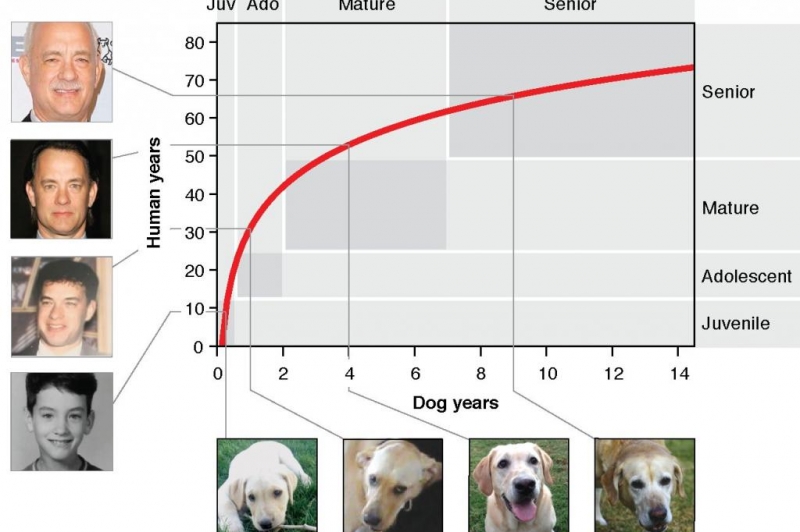 July 2 (UPI) — Estimating a dog’s age isn’t a matter of simple arithmetic. Translating a dog’s age to human years using the popular method of multiplying by seven might be amusing, but it’s of little use to a vet.

Scientists now have developed a better way to measure the aging process in dogs and more precisely convert dog age to human years.

“We had been working on ways of monitoring human age and aging at the molecular level,” Trey Ideker, professor at the University of California, San Diego School of Medicine and Moores Cancer Center, told UPI in an email.

“Marks on DNA, called methylation marks, turned out to be a really accurate way to ‘diagnose’ aging.”

Inspired by his graduate student Tiny Wang and her love of dogs, Ideker and his research partners used the same methodologyy to measure aging in dogs. The team looked at how methylation marks, chemical tags on the genomes of dogs and humans, shift locations as the two species age.

“We developed a technology to read out those methyation marks … in dogs,” Ideker wrote. “The collection of methylation marks on your DNA is called ‘the methylome,’ or in other literature, ‘the epigenome.’

“Kind of like the ‘genome’ but for chemical marks on top of DNA, not the DNA itself. The technology existed already for humans, but not for dogs.”

Scientists used the technology to study the epigenomes of more than 100 different Labrador retrievers. Their analysis showed dogs and humans don’t age at the same rates over the course of their lifetimes.

In other words, the relationship between dog and human years isn’t linear, complicating the 1:7 years rule-of-thumb.

“One dog year does not equal seven human years,” Ideker wrote. “Aging in puppies is far more rapid than that.”

“Currently the only way to know a dog’s age is to examine their teeth and its not very accurate,” Ideker wrote.

In addition to offering veterinarians a more accurate way to gauge dog age, the research identified commonalities among aging-linked genes in the genomes of humans, dogs and mice.

“[The study] pinpoints a few hundred developmental genes that may lead scientists closer to the root causes of aging,” Ideker wrote.