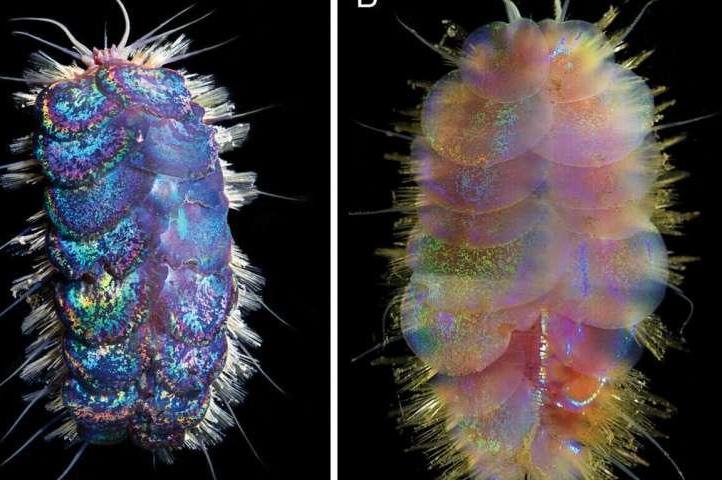 May 15 (UPI) — The group of deep sea worms known as Elvis worms is comprised of at least four distinct species, according to a new study.

The new species were collected by scientists over the course of several years. The four species are technically scale worms, but researchers began referring to them as Elvis worms — a reference to their unique appearance. The deep sea scale worms sport iridescent plate-covered shells that recall the King’s sequined jumpsuits.

Beneath their glittering scales are lung-like branching structures. Researchers suspect the organ evolved its complexity to help the worms breathe in low-oxygen environs. Most of the Elvis worms were found near whale carcasses and other kinds of decaying organic matter. One of the newly named species was found living near a hydrothermal vent.

All four of the newly named species were found at least 3,280 feet below the surface of the ocean, too deep for sunlight to reach.

While some deep sea creatures feature eyes, the Elvis worms do without. The worms don’t produce light themselves, and they can’t see light without eyes, so their iridescence serves no communicative purposes.

Instead, scientists suspect the glitter of their scales offer some kinds of defensive benefit. Deep-sea predators with flashlights under their eyes might receive a blinding glare when honing in on an Elvis worm. It’s also possible their iridescence serves no functional purpose at all.

Researchers also noticed what they thought were notches on their shells. After capturing video of a pair of worms tussling, scientists realized they weren’t looking at notches.

“It wasn’t until we saw that video of them fighting that it suddenly clicked. Like, ‘Wait — these things in the scales, these notches, are bite marks,'” Greg Rouse, a marine biologist at the Scripps Institution of Oceanography at the University of California, San Diego, told Inside Science.