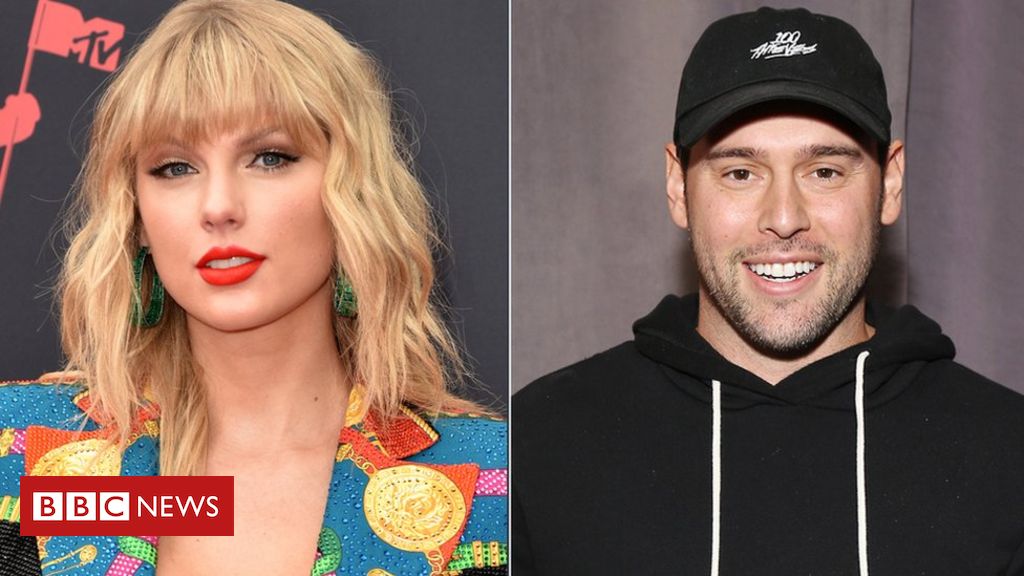 The star has been vocal in her disapproval of Braun since his company bought her back catalogue in June.

She accused him of “incessant bullying”, and said he had tried to sabotage an award show appearance.

Braun had remained silent on the feud but said threats to his family had forced him to change his mind.

“I came home tonight to find my wife had received a phone call threatening the safety of our children” he wrote in an open letter to Swift, which appeared on his Instagram account.

The 38-year-old also posted a screenshot of a text he’d received saying: “Why don’t you just die with your children? I will buy a gun [tomorrow] and then shoot you all in the head.”

Addressing Swift, he said: “I assume this was not your intention but it is important that you understand that your words carry a tremendous amount of weight and that your message can be interpreted by some in different ways.

“We are living in a time of pointless violence and as a husband and father I am concerned.”

He called for the star to meet him and resolve their differences, while noting that his previous overtures towards Swift had all been rejected.

“Many have told me that a meeting will never happen as this is not about truth or resolution but instead a narrative for you. I am hopeful that is not the case,” he said.

“I’m right here, ready to speak directly and respectfully. But if you would prefer to make large public statements while refusing to work towards resolving things amicably then I just pray that nobody gets seriously hurt in the process.

“I continue to wish you the best and hope we can resolve this.”

Braun has two sons and a daughter, all under the age of four, with his wife, Yael Cohen.

The BBC has contacted Swift’s representatives for a response.

‘A lot of confusion’

Swift’s animosity towards Braun is rooted in his work with Kanye West.

The rapper has been a thorn in her side for years: After interrupting her acceptance speech at the 2009 MTV Awards, he taunted her in song, and put a naked waxwork of her in one of his music videos.

Swift felt that Braun had encouraged and endorsed this behaviour; and exacerbated the hurt by posing for a photograph with West and Bieber that was posted to Instagram with the caption “What up Taylor?”.

So when his company, Ithaca holdings, paid $ 300m (£232m) to acquire Swift’s former record label, Big Machine, and take control of her first six albums earlier this year, the star interpreted it as an act of aggression, that “stripped me of my life’s work”.

The relationship has remained tense, with Swift announcing plans to re-record her early hits; and claiming Braun and Big Machine had tried to stop her performing her old hits on TV (for more context on that, read this article).

Braun’s open letter to the star was posted a couple of hours after he made his first public statement on the feud, during a music industry conference in LA.

Braun, whose clients include Justin Bieber and Ariana Grande, posted his statement a few hours after making his first public response

“It’s gotten out of hand,” he said, during a Q&A with Variety Magazine’s Shirley Halperin.

“I just think we live in a time of toxic division, and of people thinking that social media is the appropriate place to air out on each other and not have conversations.

“The truth is, I have no ill will for anybody. And the moment people want to have a conversation with me, I’m ready to have that conversation.”

Braun refused to address the specifics of Swift’s grievance, or even to say her name, and insisted the matter should be resolved “behind closed doors”.

“I haven’t talked about this in six months. Not once. I haven’t made a statement about it,” he said.

“What I’ll say is, people need to communicate, and when people are able to communicate, I think they work things out,” Braun said. “These problems… can be discussed behind closed doors and figured out pretty easily, and it’s something I’ve wanted to do for six months.”