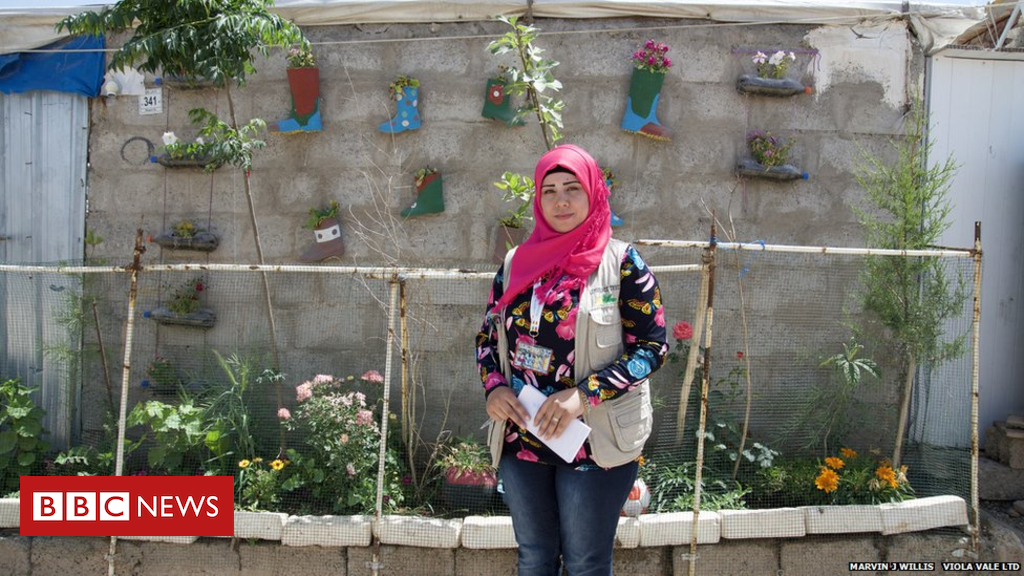 “Syria is green,” says Aveen Ismail. “But here it was like a desert until we started growing plants and trees.”

The 35-year-old fled Damascus with her family in 2012. She now lives in the Domiz Camp in Northern Iraq, where roses, lemon trees and marigolds have sprung up amid the concrete and dust.

“Creating a garden was a way for us to heal and remind us of home,” she says.

Alfonso Montiel of the Lemon Tree Trust has sat down in many of the tiny green spaces at the camp.

“You’ll see in some cases it’s full of roses,” he says. “The first question you ask yourself is, why not food?”

Flowers, says Montiel, give a sense of the passage of time. “It gives them a sense of hope. It gives a sense of control of their environment.”

The Lemon Tree Trust has been working in the refugee camps of Northern Iraq for the past three years, running garden competitions to encourage residents to create gardens, and providing seeds and plants.

Domiz, one of the largest camps in Kurdistan, is home to 30,000 refugees, most of them from Syria.

Gardeners in the camp grow seeds and plants brought to them from Syria by brothers, uncles and cousins. The community has come together to build raised beds, which are planted with vegetables and flowers.

More recently, residents of the camp have helped choose plants and flowers for the Lemon Tree Trust’s first refugee-inspired garden at the RHS Chelsea Flower Show. Sami, who has a PhD in botany, played a big role.

“He walked from Syria for ten days holding both of his boys, one on each hand, into the camp,” says Montiel. “He was a principal collaborator in choosing the plants with Tom [designer Tom Massey] and thinking about the design. This is truly a garden inspired and developed with the help of the refugees themselves.”

The garden has already proved an inspiration for Sue Biggs, the director general of the Royal Horticultural Society. When she heard about plans for the garden, she was reminded of a chapter in history 100 years ago when the RHS sent seeds to British citizens who were prisoners of war in the Ruheleben internment camp in Germany, to help them survive the hardships.

“It was uncanny really, two groups of people, 100 years apart, one in Germany, one in Iraq, and really the same basic human desire to nurture and to grow something, even in terrible circumstances.

The RHS sent 2,000 packets of seeds out to Domiz last month, including vegetables such as peppers and cucumbers, and flowers such as marigolds and sunflowers.

When the RHS searched their London Lindley Library for the original letters and photographs from the 1918 seed lift they found the refugees in Iraq had asked for a nearly identical selection.

“From one dry, dusty seed, there is a life that can flourish,” says Sue Biggs.

“At the end they can end up eating healthy food or just being able to brighten their surroundings and feel like human beings.”

The Lemon Tree Trust’s garden is on display at the RHS Chelsea Flower Show.