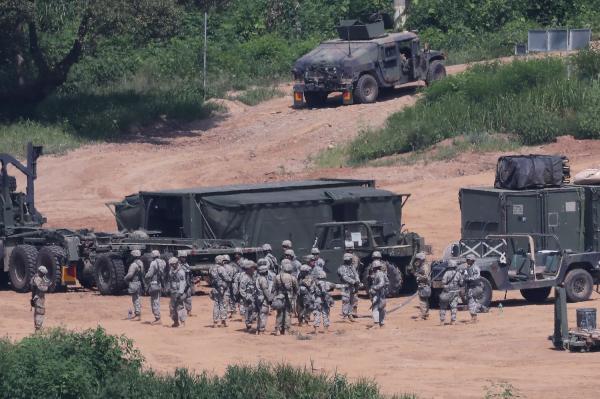 This comes after President Moon Jae In told NBC on Tuesday that he had asked Washington to consider holding the war games after the PyeongChang Winter Olympic Games, in order to defuse tensions with North Korea and encouraging its athletes to compete in the sporting event.

North Korea has long seen the joint exercises carried out by South Korea and the U.S. as a direct threat to the regime, calling it a “rehearsal for war.”

While Washington is reviewing the decision, Seoul’s top office said a potential delay would require the North to halt its provocations at least until the Winter Games begin, No Cut News reported.

“If the North launches a missile test or another provocation, it would become a situation where holding the joint military drills (at the same time as last year) will be inevitable,” Cho said.

South Korea sees the global sporting event as a momentum to improve inter-Korean relations and ease regional tensions. It has been working with the International Olympic Committee to push for North Korea’s participation in the games.

The North has not yet decided whether to take part in the Games. Most observers say the regime will make a last-minute decision.

“North Korea is currently ‘playing hard to get’ in terms of the Olympics but there’s a possibility it will participate,” Ko Yoo-hwan, a professor of North Korean Studies at Dongguk University told Yonhap.

Ko says it is likely that there won’t be another missile or nuclear test in the immediate future as the regime has already claimed to have reached full nuclear capability.

Optimists believe that if the North decides to participate in the Olympics and refrains from launching further provocations, this could indicate a move towards dialogue.

“The North may show a dramatic peace offensive through the PyeongChang Olympics amid its efforts to overcome economic turmoil,” said Gi-woong Son, a security expert at Korea Institute for National Unification.

However, other experts say regardless of the North’s participation in the games, the regime’s nuclear ambition is unlikely to be curbed.

“It looks like there’s a high possibility that North Korea will take part but it is uncertain whether delaying joint drills affect the nuclear weapons issue,” said Shin Beom-chul of Korea National Diplomatic Academy.

“To initiate talks, the North should show ambiguity rather than requesting recognition of its status as a nuclear state but recent emphasis on enhancing its nuclear force at the recent munitions industry conference renders this unlikely.”

The United States forces in South Korea on Wednesday expressed its commitment to the two allies’ decision on whether to delay the military drills, Yonhap reported.

“We, as allies, are committed to an alliance decision on the exercises and will announce the decision when appropriate,” the South Korea-U.S. Combined Forces Command said in a press release.