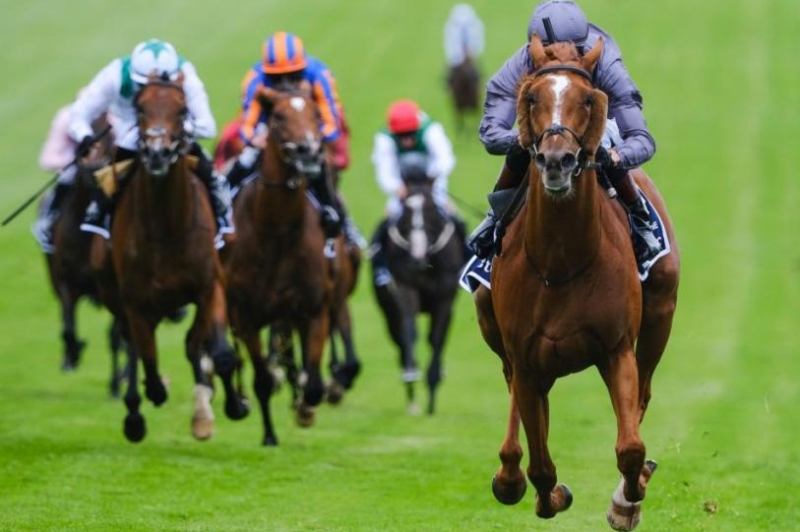 July 5 (UPI) — Serpentine, a 25-1 long shot, led the field a merry chase in the Investec Derby on Epsom Downs and kept on running, winning by 5 1/2 lengths to give both his trainer and his sire records for Derby wins.

It was no surprise that Serpentine got off to the lead in Saturday’s race. But as the lead kept getting bigger and bigger, it suddenly became clear the Galileo colt — a maiden winner just seven days earlier — wasn’t about stopping and the others had given him far to much rope.

With Emmett McNamara along for the ride, Serpentine nailed down the 25-1 upset win by an easy 5 1/2 lengths with Khalifa Sat edging Amhran No Bhfiaan for second. The favorites, Kameko and English King, were fourth and fifth.

O’Brien had six of the 16 runners in the Derby, including Kameko and Amhran No Bhfiaan, but neither he nor McNamara seemed too surprised that two of his longer chances finished in the top three.

“We try to give every horse their best chance to win and we ride them accordingly,” O’Brien said by ZOOM from his base in Ireland. “It was exactly the way we planned.”

McNamara said with his huge lead, he couldn’t hear the other horses and, with no spectators allowed at Epsom, he silence was “surreal.”

“I never looked behind me. I couldn’t hear a thing,” he said. “All I could hear was my horse breathing and he was in a very good rhythm.”

McNamara answered frankly, “No,” when asked if he expected to win the race. But, he quickly added, O’Brien “had a huge amount of confidence in the horse. It wasn’t a complete surprise.”

Serpentine, produced by the Danehill Dancer mare Remember When, was having just his fourth start. He won for the first time June 27 in a maiden event at the Curragh in Ireland.

O’Brien said the colt is a proper stayer and did not rule out a try in the Group 1 St Leger or even the Qatar Prix de l’Arc de Triomphe, though he did say he would not want Serpentine “going deep into the heavy ground” often typifying the going in the French fixture.

O’Brien also said the Coolmore lads, Serpentine’s owners, are eyeing a shot at the Group 1 Japan Cup in Tokyo on November, though more likely with one of their 4-year-olds. He mentioned, without a trace of irony, Japan might be a chance for the Japan Cup.

The Serpentine is a lake in London’s Hyde Park, created for Queen Caroline in 1730 — 50 years before the first Derby.

Two races earlier, O’Brien also saddled the winner of the Investec Oaks. Love, another Galileo product, rallied from well back for jockey Ryan Moore and quickly drew off to win by 5 lengths.

Ennistyman, another Galileo filly, held off second-favorite Frankie Darling, with Frankie Dettori up, for second.