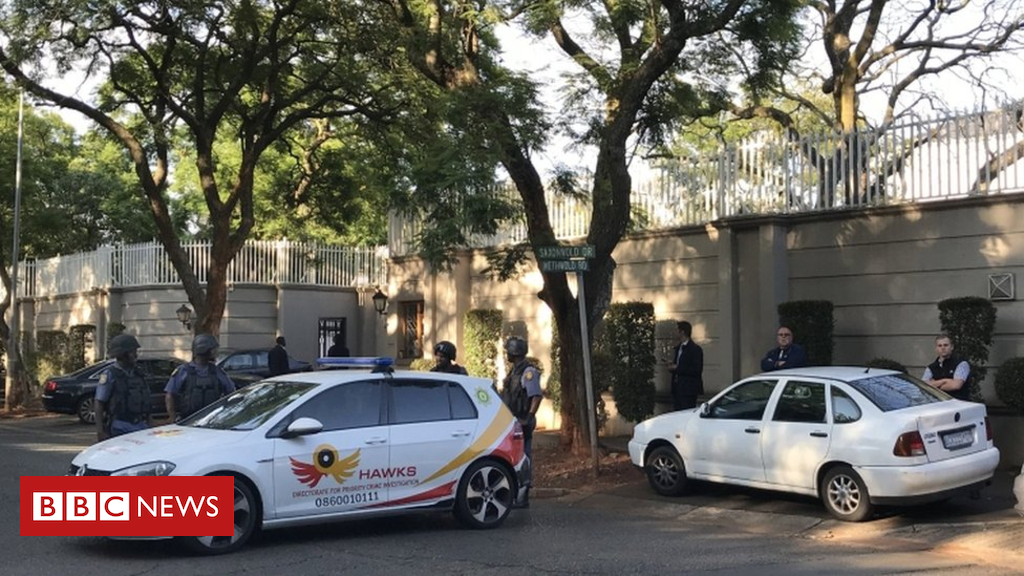 South Africa’s elite police unit have raided the home of the controversial Gupta family as the investigation into so-called state capture continues.

Three arrests have been made, including one Gupta brother, local media report. Police say two other people are expected to hand themselves in.

The Gupta family have been accused using their friendship with President Jacob Zuma to wield enormous political influence for their business interests.

They all deny the allegations.

The raid on the Gupta’s walled compound in Johannesburg comes as Mr Zuma faces increased pressure to resign, in part because of links to the Guptas.

He is expected to respond later today to a formal request from the African National Congress (ANC) to step down.

Police also carried out raids on other properties.

According to the statement released to South African media, the raids were carried out in connection with the Vrede farm investigation.

That particular investigation relates to the Estina dairy farm near Vrede, in the Free State, a project which was originally meant to help poor black farmers but from which the Gupta family are alleged to have pocketed millions of dollars.

A tranche of leaked emails revealed last year that some of the money ended up paying for the family’s lavish wedding at Sun City, South Africa’s upmarket holiday resort.

In January, the Hawks raided the offices of the Free State Premier, Ace Magashule, looking for documents linked to the project. Mr Magashule was elected secretary-general of the ruling African National Congress (ANC) in December.

At the scene: Cheers and insults

Early this morning, as the plush suburb of Saxonwold was waking up – gardeners walking dogs, children being taken to school in 4x4s – armed police arrived at the enormous, high-walled, Gupta compound opposite the lion enclosure of Johannesburg Zoo, sealing off a section of the road, and venturing inside.

Soon afterwards, two luxury vehicles were seen driving out of the gates escorted by police in separate cars.

The Hawks – the elite high-priority crimes unit – confirmed that this was an operation to arrest suspects, rather than to raid properties.

A blue police helicopter swung over the property, as local people voiced satisfaction about the police action.

“It’s very emotional for all South Africans. This is about getting South Africa right again,” said Tessa Turvey.

“This is real meaningful change. I certainly don’t think it would have happened if Zuma was still president of the ANC,” said a man, walking his dogs.

Who are the Gupta family?

The embattled Gupta family own a range of business interests in South Africa, including computing, mining, air travel, energy, technology and media.

The three brothers, Atul, Rajesh and Ajay, moved to the country in 1993 from India, just as white-minority rule was ending.

They are known friends of President Zuma – and his son, daughter and one of the president’s wives worked for the family’s firms.

The brothers have been accused of wielding enormous political influence in South Africa, with critics alleging that they have tried to “capture the state” to advance their own business interests.

What is the scandal between the family and the president?

Former Deputy Finance Minister Mcebisi Jonas made a public allegation in 2016 that he was offered 600m Rand ($ 50m; £36m) by the Gupta family to be the next finance minister – as long as he did their bidding.

It was followed by a damning report by a South African government ombudsman that accused the Guptas and President Zuma of colluding to win government contracts.

The public backlash worsened in 2017 when more than 100,000 emails were leaked which appeared to show the extent the family had exerted their influence.

It suggested a complex web of government contracts, as well as alleged kickbacks and money laundering.

It prompted marches and public protests against the family and President Zuma, dubbed the “Zuptas”.