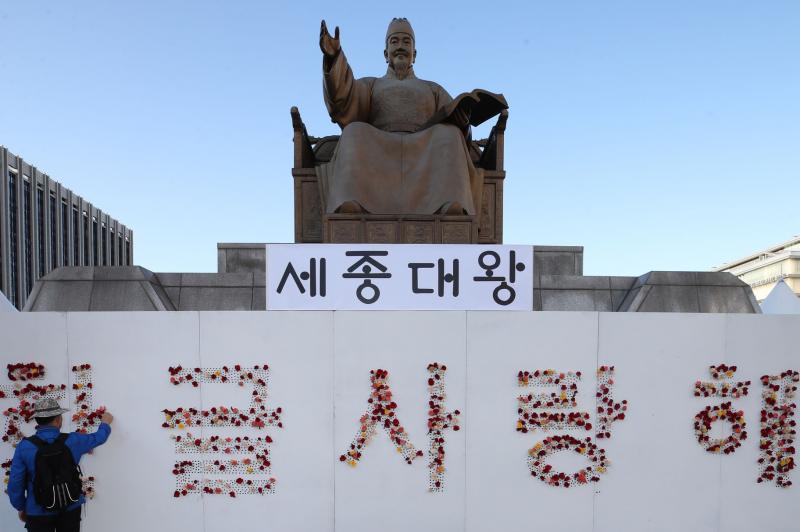 SEOUL, Oct. 9 (UPI) — South Korean President Moon Jae-in on Wednesday honored the sacrifice Korean independence activists made to protect the Korean alphabet, known as “hangeul,” during Japan’s 1910-1945 colonial rule as he marked the anniversary of the Korean alphabet’s promulgation.

“On national Hangeul Day, I ruminate about love for the people of King Sejong, who invented hangeul 573 years ago, and the national spirit of independence activists who fight for hangeul,” Moon said in a message posted on social media to mark Hangeul Day.

Hangeul was officially invented by King Sejong of the Joseon Dynasty (1392-1910) in 1446. It was originally aimed at expanding literacy among the general population, who could not easily learn the writing system of the time, as it was centered on Chinese characters.

Hangeul Day was initiated in the 1920s by a group of Korean-language scholars as part of efforts to preserve the written language under Japanese colonial rule, during which Japan banned its use and implemented Japanese as Korea’s official language.

This year also saw the 100th anniversary of the March 1 Independence Movement and the establishment of the China-based provisional government.

“During the Japanese colonial era, protecting hangeul was part of the independence movement,” Moon said. “Based on the sacrifice of Korean scholars, hangeul has played an important role in building a new country.”

He said the simplicity of hangeul helped South Korea achieve the world’s lowest illiteracy rate and pull off the outstanding industrialization and democratization of the past several decades.

“Now, there are some 180 Sejong Institutes across the world where people are eager to learn Hangeul, which underlies the Korean wave,” said the president. “I’m so proud of seeing young foreigners singing Korean-language songs.”

He also thanked all the people for working hard to preserve the Korean language and script.