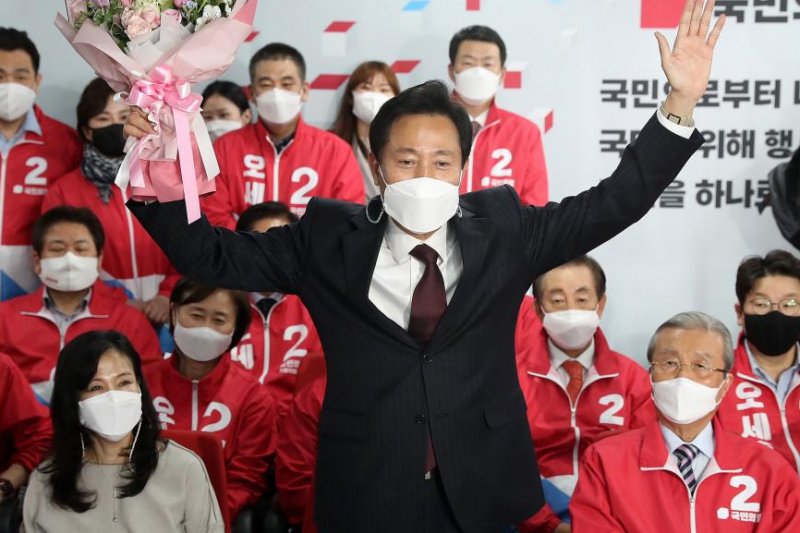 SEOUL, April 7 (UPI) — South Korea’s ruling Democratic Party was severely beaten at the polls as its mayoral candidates in the two largest cities, Seoul and Busan, lost by-elections widely seen as a bellwether for next year’s presidential race.

The Democratic Party’s candidate in the capital city of Seoul, Park Young-sun, was defeated by her People Power Party opponent Oh Se-hoon on Wednesday by a margin of 57.5% to 39%, according to final results released by the National Election Commission.

Oh was mayor of Seoul from 2006 until 2011, when he resigned over a failed effort to restrict the city’s free school lunch program.

In Busan, a city of 3.5 million people, the PPP candidate Park Heong-joon beat the Democratic Party’s Kim Young-choon 63% to 34%.

For voters, the mayoral elections were an opportunity to send a message about the job the ruling Democratic Party has done. Approval ratings for the party of President Moon Jae-in have plummeted in recent months, due largely to the government’s inability to rein in an overheated housing market that has seen prices in Seoul spike more than 50% during Moon’s tenure.

The mayoral races in Busan and Seoul were special by-elections held after both seats were vacated last year under a cloud of scandal.

Seoul Mayor Park Won-soon, a leading figure in the Democratic Party and considered a potential presidential contender for 2022, died by suicide in July as sexual abuse allegations by his former secretary went public.

Busan Mayor Oh Keo-don, also a member of the Democratic Party, resigned last April after admitting to sexual assault of a public servant during a meeting in his office.

The newly elected mayors will serve out the remaining 14 months of the previous mayors’ four-year terms.

“[he Democratic Party] humbly accepts the public sentiment displayed in the election results,” acting party chairman Kim Tae-nyeon said in a press release, according to news agency Yonhap. “We gave huge disappointment to the people due to our shortcomings.”

President Moon enters the final year of his term on shaky footing as he and the Democratic Party will look to recalibrate policies and leadership ahead of next year’s presidential election, to be held in March.

Moon’s signature policy of inter-Korean engagement has largely stalled out since a period of rapprochement in 2018, while the public has also frowned on initiatives such as an effort to reform the powerful government prosecutor’s office.

The president has seen his popular support plunge to new lows in recent weeks. A survey from Gallup Korea released last week found only a 32% approval rating for Moon, the lowest of his presidency, with 58% disapproving of the job he’s done.

Wednesday’s elections mark the end of a string of victories for the Democratic Party, which won parliamentary majorities in 2016 and 2020, the presidency in 2017 and local elections in 2018.

The results were in stark contrast to one year ago, when the Democratic Party and an allied party swept to a landslide victory and a super-majority in the parliament, winning 180 of 300 seats in the National Assembly.

At the time, the government was riding high on public support for its vigorous early response to the COVID-19 pandemic.

However, an outbreak of the pandemic has continued throughout South Korea since mid-November, with public frustration growing over social-distancing measures and some complaining about a slow rollout of vaccines.