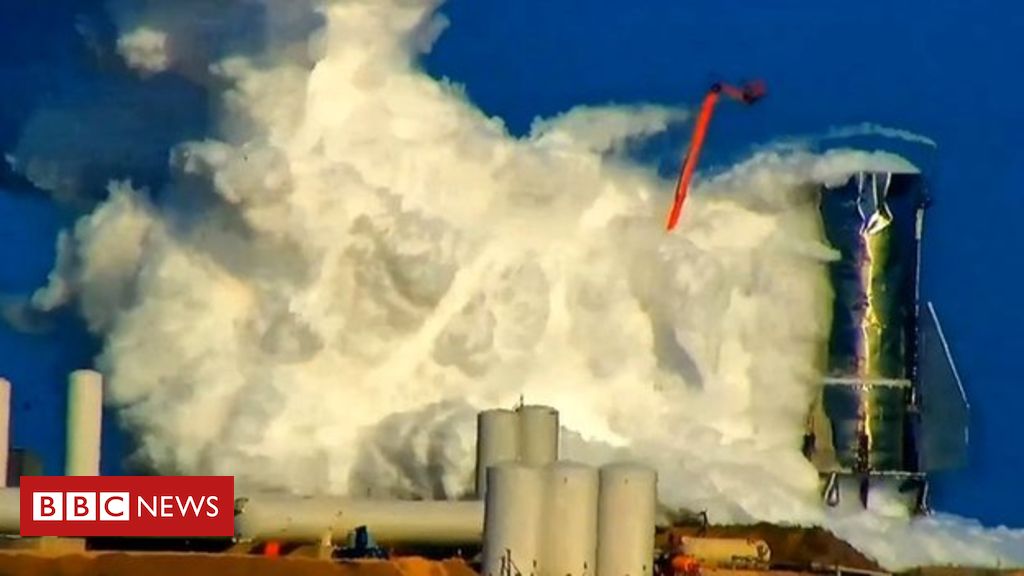 A video from the scene in Texas showed the top part of the vehicle rupture.

Cryogenic propellants that were being loaded at the time dispersed across the Boca Chica facility in a huge cloud.

The US company bills Starship as an all-purpose transportation system of the future. It will be used to ferry people and cargo off Earth, and to destinations around the globe.

The Mk-1 prototype was due to begin practice flights to an altitude of 20km in the coming weeks.

In a tweet, SpaceX CEO Elon Musk said that could no longer happen and the ship would be retired.

Development work is already being directed at another prototype, labelled the Mk-3.

“[Mk-1] had some value as a manufacturing pathfinder, but flight design is quite different,” Mr Musk told his legion of fans on social media.

A statement issued by SpaceX read: “The purpose of today’s test was to pressurise systems to the max, so the outcome was not completely unexpected.”

Elon Musk has given regular updates on his plans for Starship, the most recent being in September when he spoke at length about the vehicle’s engineering and its likely applications.

The Mk-3 vehicle, he said, could be built much more quickly than the Mk-1. It was also capable of going into orbit.

Like the SpaceX Falcon-9 rockets, Starship is designed to be reusable. More so, in fact.

On the Falcon-9, only the lower booster comes back to Earth after a flight; the upper-stage is expendable.

In the case of Starship, it and its booster, which is called the Super Heavy, will make a controlled landing following a mission.

Starship has been touted as a rival to the US space agency’s (Nasa) big new rocket called the Space Launch System (SLS), which will be used to send astronauts to the Moon and Mars.

So far, Nasa is only considering Starship as a potential freighter, to deliver cargo to the lunar surface.

SpaceX has experienced a number of very public hardware mishaps in recent times. In April, for example, its Dragon astronaut capsule suffered a dramatic explosion on a test stand.

But the company is not afraid of these failures. It believes in a rapid process of “build, test and iterate”.

SpaceX’s methods – and successes – have had the rest of the rocket industry racing to catch up.