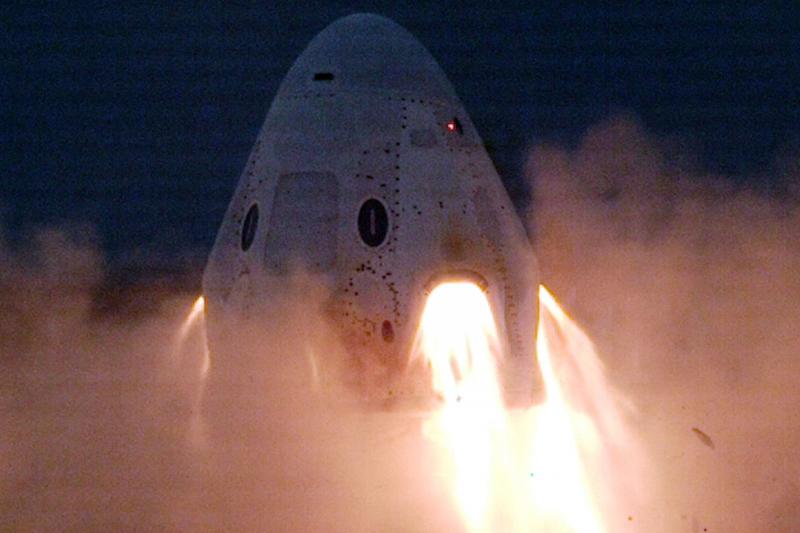 ORLANDO, Fla., Jan. 17 (UPI) — SpaceX plans a final test launch of its Crew Dragon capsule in Florida on Saturday to prove it can carry astronauts to safety in an emergency — a fiery demonstration that will destroy a Falcon 9 rocket.

Liftoff is set for 8 a.m., with a four-hour window in case of delays. The Air Force forecasts the weather will be 90 percent favorable for a launch.

The test, called an in-flight abort, is intended to show that the capsule can detach, fire its own engines and land if the rocket has a problem. The rocket will be lost as it burns up in the atmosphere over the Atlantic Ocean.

If all goes well, SpaceX will be poised to launch the first astronauts to the International Space Station from U.S. soil since the space shuttle program ended in 2011.

The capsule for the test is to lift off aboard a Falcon 9 rocket from Kennedy Space Center’s Launch Complex 39A — the historic pad from which the Apollo 11 moon mission was launched in 1969. SpaceX leases the complex.

If SpaceX postpones the test Saturday, additional attempts are scheduled for Sunday and Monday, but weather forecasts are not as good for those days.

The test launch comes as NASA is feeling pressure to stop relying on Russian Soyuz capsules to send people to the station. SpaceX and its competitor, Boeing, are years behind schedule in developing a new capsule.

The rocket for SpaceX’s test flight will include a first-stage booster being reused for the third and final time. As the rocket nears 90 seconds in flight, the capsule will detach and fire its own engines.

SpaceX founder and CEO Elon Musk confirmed on Twitter recently that the rocket won’t survive the test flight. It includes the first booster ever flown of SpaceX’s latest rocket type, the Falcon 9 Block 5, which had its maiden launch in May 2018. SpaceX has been reusing the first-stage boosters since 2015.

“Destroyed in Dragon fire,” Musk tweeted, in response to a question about what would happen to the rocket during the upcoming abort test. He added that engineers tried to find a way to save the booster, but couldn’t.

According to NASA, the rocket will be ripped apart by air friction or G-forces as it spins out of control or re-enters the atmosphere.

SpaceX said the capsule is designed to escape from danger at any point during the rocket’s journey to the upper atmosphere, not just in the first few minutes.

By comparison, the four engines of a huge Boeing 747 jetliner can generate 266,000 pounds of thrust combined, while the Falcon 9 rocket’s first stage gets up to 1.8 million pounds of thrust, and the second stage is capable of 210,000 pounds, according to SpaceX.

Crew Dragon’s eight engines provide redundancy, so that if one engine fails, an escape still is possible, the company’s capsule description said.

The Crew Dragon capsule is similar to Boeing’s Starliner capsule in that they both have onboard engines handle the abort. That’s different than NASA’s Orion capsule for deep space missions, which has a separate abort device on top of it during launch.

During the test flight Saturday, Crew Dragon is to fire its engines and then coast, jettison its cargo trunk and flip around to point its heat-shielded bottom into the atmosphere.

Parachutes will enable the capsule to make a soft landing in the Atlantic Ocean near recovery teams. NASA said the rocket will break up offshore over the Atlantic.

“Expected breakup time will vary based upon a number of factors, including [weather conditions] and expected minor variations in vehicle attitudes and positions, but could occur shortly after separation or later upon reentry from the upper atmosphere,” NASA said in a mission description.

SpaceX teams will be ready to recover debris immediately after the launch, NASA said.

Two veteran astronauts, Bob Behnken and Doug Hurley, are scheduled to ride on the first SpaceX mission this year if the final abort test succeeds.

A previous Crew Dragon capsule reached the space station in March in an uncrewed test flight, but SpaceX suffered a setback when that capsule exploded during a subsequent test fire on a launch pad.

SpaceX is competing with Boeing in NASA’s Commercial Crew Program to develop spacecraft capable of reaching the space station. Boeing’s capsule, Starliner, was launched Dec. 20 without a crew, but a problem with its mission clock prevented it from docking at the space station.

Despite the problem, Boeing and NASA said Starliner’s test flight accomplished most of its goals. An investigation into the Starliner problem will take at least two months, NASA said.

SpaceX made history in 2012 when it became the first commercial space company to deliver cargo to the space station using a privately built Dragon cargo capsule. That had previously only been accomplished by governments. But Dragon also was designed to be adapted for carrying people.

SpaceX, based in Hawthorne, Calif., designs, manufactures and launches rockets and spacecraft. The company was founded in 2002, saying its goal is to revolutionize space transportation, eventually enabling people to live on other planets.