The contract award means ULA and Elon Musk‘s SpaceX will launch about three dozen national security missions from 2022 to 2026 — at a price tag of about $ 1 billion per year. ULA said its contract represents about 60 percent of those missions.

ULA, a launch provider to the U.S. government for 14 years with Atlas and Delta rockets, is on schedule to launch its next-generation rocket, the Vulcan Centaur, next year, CEO Tony Bruno told UPI in an interview this summer.

The new rocket is designed to provide a more efficient, more powerful launch than Atlas and Delta with Blue Origin engines produced in the United States. ULA previously bought Russian rocket engines, which Congress outlawed in a 2014 bill.

ULA has agreed to buy engines made by Blue Origin, the BE-4, which gives those two companies a partial alliance in the contract.

The Vulcan rocket being assembled in Decatur, Ala., would provide from 1.1 million pounds of thrust to 3.4 million pounds, depending on configuration.

That compares to SpaceX’s Falcon 9 rocket with 1.7 million pounds of thrust on liftoff. But SpaceX also has its Falcon Heavy rocket, which produces three times the thrust of a Falcon 9.

Bruno previously told UPI that it takes about $ 1 billion to develop a new rocket, but the company declined to say how much it has spent on Vulcan.

The Air Force announced in 2019 that it would accept only two of the four rocket systems under development. Some members of Congress had suggested funding a third company to maintain competition.

In addition to the longer-term contract impact, the immediate award from the government announced Friday is $ 337 million more for ULA’s Vulcan development and $ 316 more for SpaceX to build upon its launch capability.

The win continues a string of big advancements for SpaceX, which recently became the first private company to send NASA astronauts into orbit and return them safely.

SpaceX already is flying the Falcon 9 rocket on government missions, while its three competitors still are working on new rockets.

SpaceX recovers the first-stage booster and the fairing halves, or nose cone, for many launches and reuses them.

ULA plans to reuse the engines by catching them with helicopters and grappling hooks in midair as they fall back to Earth. The company not proven its technique can work.

ULA has two additional customers for Vulcan launches, including California-based Sierra Nevada, which has developed the new Dreamchaser space plane to launch cargo to the space station.

Tory Bruno, ULA’s president and CEO, said Friday in a statement that the company was “honored” to win the contract.

“Vulcan Centaur is the right choice for critical national security space missions and was purpose-built to meet all of the requirements of our nation’s space launch needs,” Bruno said.

Northrop Grumman officials are disappointed with the decision, the company said in a statement Friday.

“We are confident we submitted a strong proposal that reflected our extensive space launch experience and provided value to our customer, and we are looking forward to our debriefing from the customer,” the statement said. 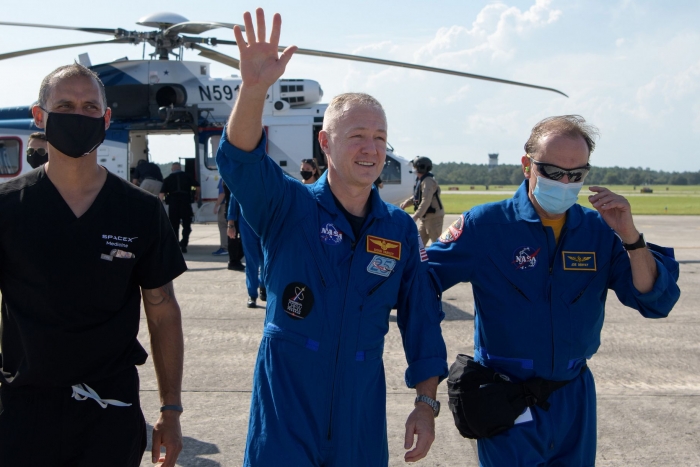