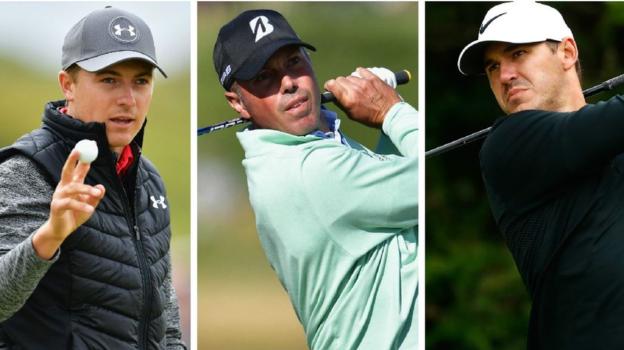 The three Americans are on five under par, a shot clear of England’s Paul Casey and former Masters champion Charl Schwartzel, with a resurgent Ian Poulter a further shot back.

Rory McIlroy, champion in 2014, endured a horrific start to his title charge, falling to five over after six holes, before a remarkable salvage effort brought four birdies on the back nine.

Two-time champion Ernie Els and world number two Hideki Matsuyama are among 14 men just three shots off the lead after a good day for scoring on the Southport links.

They are joined on two under by Stuart Manley, the solitary Welshman in this year’s Open, and Scottish pair Martin Laird and Richie Ramsey.

Reigning champion Henrik Stenson is one under after a steady 69.

After a cold start on the Merseyside coast, the wind stayed steady across this famous links course, and as earlier grey clouds cleared in the afternoon, conditions improved.

Yet with rain and winds forecast for Friday afternoon, and more rain due across much of Saturday, this course is likely to bite back over the next two rounds.

Spieth came close at St Andrews two years ago before fading to fourth after charging up the leaderboard on the final day.

This time the 23-year-old played with the concentration and control of a veteran to make the early running, birdieing the second under overcast skies and repeating the trick on the par-four eighth and ninth.

His 65 is his lowest score for a round at an Open, his form ominous for his rivals after he won the Travelers Championship, his last tournament before arriving in Southport.

Two groups behind, Koepka eagled the 567-yard par-five 17th to complete the back nine in 32 shots, taking a remarkable tally of just 21 putts across his round.

McIlroy has missed the cut at his past three tournaments and the heavy rust was in evidence again, bogeys coming on all but the second of the first six holes.

It could have been worse – he sunk a 25-foot putt for bogey on the first and made another long one to save par on the seventh – but after a stern talking-to from caddie JP Fitzpatrick he rallied over the back nine, birdieing the par-five 15th and 17th holes before sinking a 15-foot putt on the last to pick up another shot.

It left him level on 71 with world number one Dustin Johnson and keeps alive his hopes of a first major in almost three years, even if there is still an uncertainty in his pre-shot routine and weakness in his swing when the wind blows that belies his track record.

But he has saved face as well as his chances of being here at the weekend, and his clenched-fist celebration as that putt on 18 dropped and the subsequent fist-bump with Fitzpatrick spoke of renewed belief as well as relief.

Casey and Poulter turn back the clock

Casey celebrates his 40th birthday on Friday, and the man who had slipped outside the world top 100 a few years ago was clearly delighted with a four-under 66 that contained just one bogey.

Now a keen recreational cyclist, he prepared for his 15th Open by riding through the Italian Dolomites, and while there are still mountains to climb if he is to go better than his best finish of a tie for third at St Andrews in 2010, he will start his fifth decade as the leading Englishman in the Championship.

Poulter too will be celebrating his 67, a few months after he feared he had lost his PGA Tour card in the United States after poor form and a long-term foot injury sent his ranking plummeting.

The Englishman is now 41, but having finished tied for second at the Players Championship and shown well in the first two rounds of the Scottish Open last week is coming back into rich form at a serendipitous time.

Swede Stenson has not won on Tour this year and has missed the cut six times in his past seven tournaments.

Although he was outshone by playing partner Spieth, his 69 thus represents an encouraging start to the tournament he won so memorably at Troon a year ago.

Phil Mickelson, runner-up behind Stenson in that epic final-day showdown, could not match his spectacular first-round 63 of 12 months ago as he battled to a three-over 73.

Despite enjoying the kindest conditions of the day, it was his first round at The Open in 18 years not to feature a birdie.

At the bottom of the leaderboard sits Mark O’Meara.

The champion here at Birkdale in 1998 opened with a quadruple-bogey eight on his way to an 11-over 81, while fellow former champions Todd Hamilton, David Duval and Louis Oosthuizen are also in the last five.