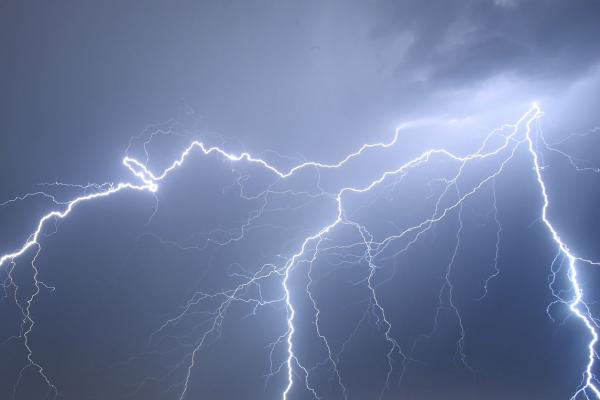 The Telescope Array is an observatory consisting of 507 scintillation surface detectors spread out across a massive expanse of the Utah desert.

Between 2014 and 2016, the array detected 10 downward terrestrial gamma ray flashes, or TGFs. The array’s observations — published this week in the Journal of Geophysical Research — are the first to link TGFs with the beginning of lightning strikes and the first to locate the origin of a TGF inside a thundercloud.

TGFs are the highest-energy light waves on the electromagnetic spectrum, and thanks to the Telescope Array, scientists are closer to understanding them.

“What’s really cool is that the Telescope Array was not designed to detect these,” Rasha Abbasi, an astrophysicist at the University of Utah, said in a news release. “We are 100 times bigger than other experiments, and our detector response time is much faster. All of these factors give us the ability that we weren’t aware of — we can look at lightning in a way that nobody else can.”

The array was originally designed to detect cosmic rays, the high-energy particles that regularly collide with the Earth’s atmosphere.

Like a slow drizzle, cosmic rays trigger the arrays once every few minutes. Downward terrestrial gamma ray flashes arrive like water from a firehose.

“It was BOOM BOOM BOOM BOOM,” said John Belz, professor of physics at the University of Utah. “Like, four or five triggers of the detectors occurring within a millisecond. Much faster than could be expected by cosmic rays.”

“We realized eventually that all of these strange events occurred when the weather was bad,” Belz said. “So, we looked at the National Lightning Detection Network and, low and behold, there would be a lightning strike, and within a millisecond we would get a burst of triggers.”

TGFs were originally measured by satellites, but the observations were imprecise. Thanks to the Telescope Array data, scientists now know the bursts last for a few dozen microseconds or less. The new data also proves TGFs originate in the thundercloud near the initial breakdown stage of the lightning.

“The downward-going TGFs are coming from a similar source as the upward ones. We safely assume that we have similar physics going on,” Abbasi said. “What we see on the ground can help explain what they see in the satellites, and we can combine those pictures in order to understand the mechanism of how it happens.”

Despite the wealth of data provided by the Telescope Array, many TGF-related questions remain unanswered.

“The mechanism that produces the gamma rays has yet to be figured out,” said Paul Krehbiel, a lightning researcher at New Mexico Institute of Mining and Technology.

So far, scientists have only detected TGFs linked with a specific type of lightning, but efforts to install new kinds of lightning detectors at the observatory could identify new types TGF phenomena.