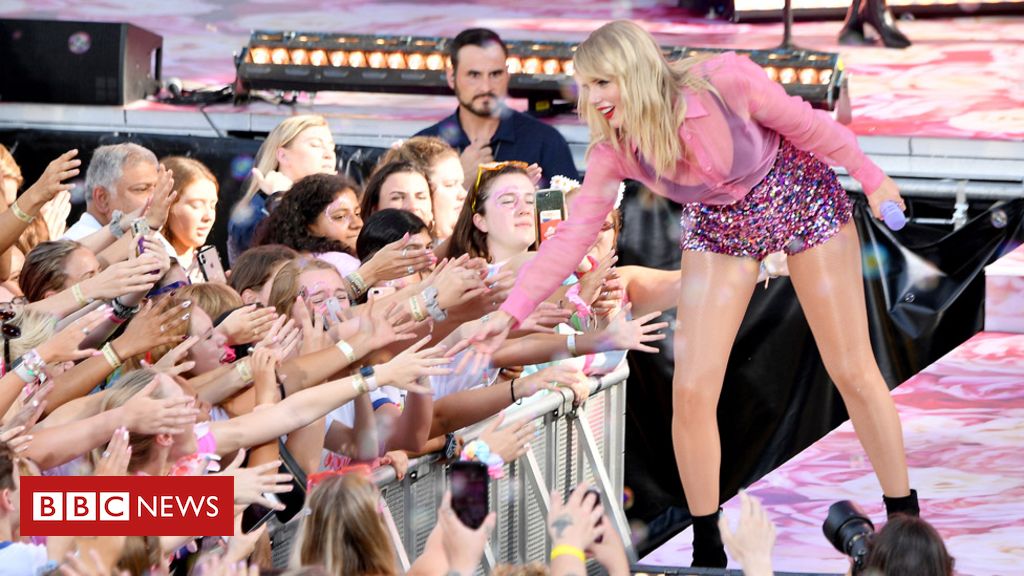 Taylor Swift’s seventh album Lover is “unapologetically bubblegum”, a “towering work” that shows her “at her most liberated” – but is “too long”.

That’s according to the first reviews after the album’s release on Friday.

The 18-track opus is “one big pop bubblegum blast” and is “her most mature collection as well as her most fun one”, according to Variety.

But “not even Taylor Swift… can muster enough knockout tunes to fill 18 tracks”, wrote The Guardian’s critic.

While the highly-anticipated album offers evidence that Swift is “a better songwriter than any of her competitors in the upper echelons of pop”, Alexis Petridis wrote that it’s padded out with “lightweight” songs.

Its “something-for-everyone approach feels like consolidation, not progress”, he declared, while Rolling Stone’s Nick Catucci said it is “evolutionary rather than revolutionary”.

He continued: “But nevertheless it feels like an epiphany: free and unhurried, governed by no one concept or outlook, it represents Swift at her most liberated, enjoying a bit of the freedom she won for her cohort.”

As ever with Taylor Swift, there’s a lot in the lyrics to decipher and decode.

In the liner notes, Swift wrote that “the album is a love letter to love itself – all the captivating, spellbinding, maddening, devastating red, blue, gray, golden aspects of it (that’s why there are so many songs)”.

The Guardian’s Petridis wrote: “Lover’s highlights come when Swift ignores the outside world, whether that’s politics, public image or the desire to reassert her pop dominance.”

It is “easily her most upbeat and romantically smitten album”, according to Variety’s Chris Willman. “As she narrows in on 30, Swift is looking to prove that love is something she does even better than revenge.”

Billboard’s Jason Lipshutz said: “It is a towering work that’s worth both close analysis on headphones and scream-alongs on stadium speakers.

“As a reflection of what Taylor Swift loves, Lover is whimsical, moving, imperfect, exhilarating. It’s a detailed snapshot that will endure.”

And it sees her make a return to “technicolor with an album filled with big-hearted love songs and diary-honest lyrics”, according to Time magazine’s Dana Schwartz.

USA Today’s Maeve McDermott said it sounded like Swift was “clearly having more fun on Lover than we’ve seen in ages”.

But with its 18 tracks, she said “a more cynical listener” may rank it alongside “the heap of supersized rap and pop releases released over the past few years, stuffed with filler, that have dominated streaming and inflated artists’ sales numbers”.

In The Independent, critic Alexandra Pollard judged it to be “a partial resurrection of the Swift of old: moony romance and earnest earworms abound”.

But she too took issue with the length. “At around track 14, Lover starts to feel baggy,” she wrote. “There is a brilliant album among the 18 songs, if only it had been pruned a little.”

On Thursday, the singer said she intends to record new versions of her hit songs after her back catalogue was bought by pop manager Scooter Braun.

After the album’s release, Braun took to Twitter in an attempt to smooth over relations with the superstar.

And Lover was an immediate hit with Swift fans.

I don’t know if it’s too early to say this, but Lover is my favourite Taylor Swift album. It’s so mature, the production is amazing, the songs are beautiful and the messages behind them? Iconic like wow.#Lover #LoverOutNow

#Lover deserves to win AOTY at the Grammys. I want Taylor to be the first woman to win it 3 times with an album like Lover that shows growth/maturity, serves lyrics, has social commentary, gets painfully real, explodes with production, and drags men all at once