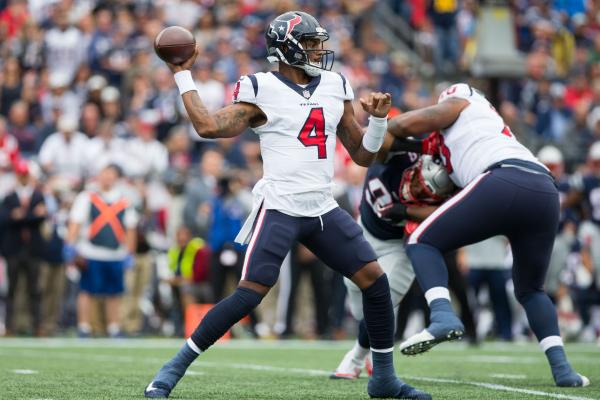 Quarterback Deshaun Watson took a beating during the Houston Texans‘ 19-16 victory over the Dallas Cowboys on Sunday night, but said on Wednesday that he will be ready to go this week against the Buffalo Bills.

The Houston Chronicle reported that Watson, who received treatment on the sideline during the game after taking several big hits, is dealing with a chest injury.

“For sure,” Watson said, according to Deepi Sidhu of the Texans’ official website, when he was asked if he would be able to face the Bills.

“I feel good; I feel great,” added Watson, who completed 33 of 44 passes for 375 yards with one touchdown and one interception against the Cowboys. “I’ve been sore plenty of times. That’s part of the game.”

Texans head coach Bill O’Brien, who said earlier that he would “let the injury report speak for itself,” this time responded with, “Oh, yeah,” when asked by reporters if he thought Watson would play on Sunday.

The Texans (2-3) have been struggling to protect Watson, allowing an NFL-high 52 quarterback hits and 18 sacks, second-most in the league, through the first five games.

The Bills, who have a strong pass-rushing defensive unit led by Jerry Hughes and Trent Murphy, figure to go after the banged-up Watson right out of the gate on Sunday.