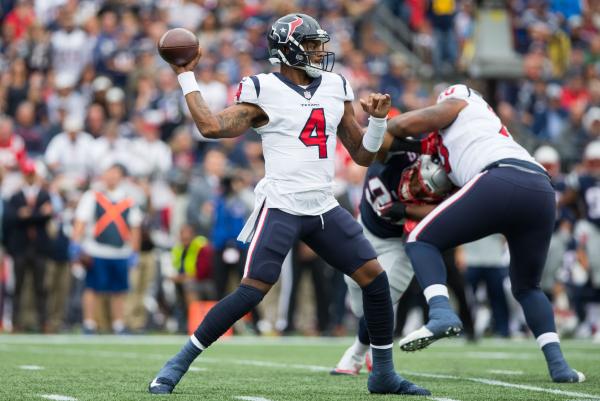 INDIANAPOLIS — At the end of a wildly entertaining, exhausting overtime test of endurance, Indianapolis Colts first-year head coach Frank Reich wasn’t about to settle for a tie.

Even when facing fourth-and-4 at his own 43 with just 27 seconds remaining, Reich didn’t hesitate. He went for it. And didn’t second-guess himself when it backfired.

In a game where Andrew Luck set franchise records for passing, his final fateful throw was too low and bounced incomplete. The Houston Texans completed a 24-yard pass to DeAndre Hopkins and spiked the ball to stop the clock, which precipitated Ka’imi Fairbairn kicking a 37-yard field goal with one second remaining in overtime for a stunning 37-34 road victory on Sunday at Lucas Oil Stadium.

The gamble gave the previously winless Texans (1-3) a chance to snap a nine-game losing streak after they blew an 18-point lead in the third quarter and allowed the Colts (1-3) to rally for a last-minute touchdown and tying two-point conversion to force the extra 10-minute overtime.

“Yeah, we won,” Texans safety Tyrann Mathieu said, “but it’s not how we wanted to win.”

But Texans head coach Bill O’Brien, who had said during the week his team “had to win,” came away convinced this could change his team’s season.

“That’s going to get us going,” he told his players in the locker room. “That’s what we needed.”

“I wasn’t surprised,” O’Brien said. “Frank is a great coach. He played in this league. Coming from Philly, we kind of knew they would try to go for it there. It was kind of a risk-reward situation.”

Texans quarterback Deshaun Watson overcame being sacked seven times to complete 29-of-42 passes for 375 yards. He threw touchdown passes to Hopkins and Will Fuller and also ran for a score.

Luck was even more resilient as he endured relentless pressure from pass rushers J.J. Watt and Jadeveon Clowney, each of whom had two sacks, to complete 40-of-62 passes for 464 yards and four touchdowns. The attempts set a team record, the completions tied Peyton Manning for another record, and the yardage ranked second in Colts’ history, just eight shy of another Manning game.

When Luck came to the sideline late in overtime, he could tell from looking at Reich’s face that the coach’s mind was made up. The Colts first burned a timeout trying to get the Texans to jump offside, which the visitors didn’t. Then they took the shot.

What the quarterback did lament was the next play, a sideline throw that was a once-bouncer into the ground to wide receiver Chester Rogers.

“I didn’t give Chester enough of a chance to make a play,” Luck said, “and I’m sick to my stomach about it.”

The Colts came back from many self-inflicted mistakes, gifting Clowney a game-tying fumble recovery touchdown when center Ryan Kelly botched his snap to Luck in the first quarter. When the Texans scored again on their next series and got the ball back, it marked the first time this season that they had a lead and possession.

Watt’s second-quarter strip sack provided the Texans with the ball at the Colts’ 8-yard line, and Watson cashed in two plays later with an 8-yard scoring pass to Hopkins for a 21-7 lead.

About the only thing the Colts could feel good about entering halftime was when kicked Adam Vinatieri made a 42-yard field goal in the final minute to become the NFL’s career leader with 566 field goals. The future Hall of Famer passed Morten Andersen.

“It’s more fun when you get a win, that’s for sure,” Vinatieri said.

“I love the fourth-down call to go for the win,” he said. “Why not? But you’ve got to make the play.”

Watson made it 28-10 with a 5-yard touchdown sweep in the third quarter. Some Colts fans booed. Some left the stadium, convinced the outcome was decided.

Far from it. Those who departed missed a dramatic conclusion.

Luck sandwiched two touchdown passes to rookie running back Nyheim Hines around another to tight end Eric Ebron to give the Colts a chance to force overtime. A two-point pass to Rogers tied the score at 31 with 45 seconds remaining in regulation.

But it ended up being all for naught after the teams exchanged field goals in overtime.

“If you tie, you might as well have lost,” Kelly said.

Neither of the AFC South Division cellar dwellers could afford a loss, considering Tennessee and Jacksonville both won to improve to 3-1.

The Texans, who have played three of four on the road, return home to host the Dallas Cowboys next Sunday. The Colts don’t have much time to dwell on this setback with a Thursday night game at New England (2-2).

“These types of games bring tears to your eyes,” Rogers said, “but the fact of the matter is we got the Patriots on Thursday. Like [Reich said], ‘Go in there, take a shower, rinse it off you and onto the Patriots.'”