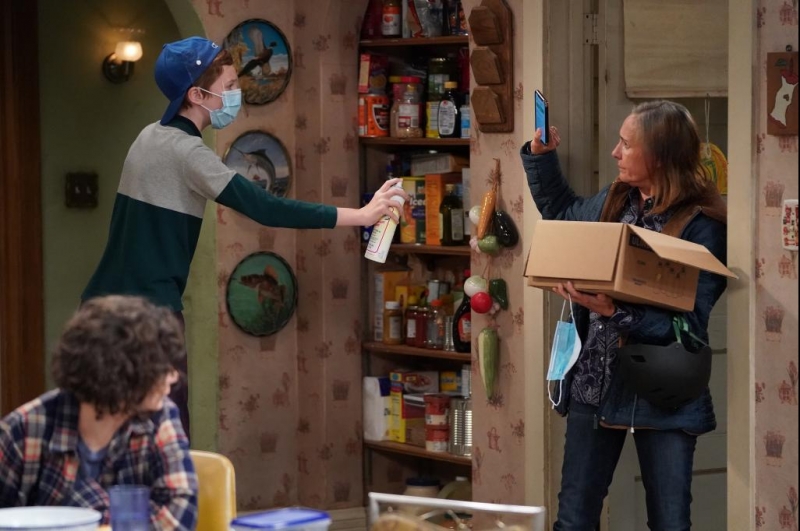 LOS ANGELES, Oct. 21 (UPI) — The Conner family has represented the working class in America since the original Roseanne series aired in 1988. Season 3 of spinoff, The Conners, was filmed during the COVID-19 pandemic, with storylines reflecting the struggles American families experienced this year.

New pandemic rules create stresses inside the Conner home, as well as outside. They maintain 6 feet of social distance in their own home and Darlene’s son, Mark (Ames McNamara), takes everybody’s temperature when they return home from work.

The family also was hit with struggles with finances. Dan is served with an eviction notice and Darlene’s magazine struggles to sell ads.

The second episode, which Fishman directed, deals with the Conners trying to find a way to celebrate Halloween as the pandemic prevents them from trick-or-treating or having a costume party.

“Halloween won’t be the same this year, so the Conners are going to find a way to make it right,” executive producer Bruce Helford said. “Maybe it will give families a way to figure out how to do it a little bit better at their own homes.”

Fishman, unsure whether The Conners would resume production, said he also spent the pandemic worrying about money.

“Much like The Conners, we enforced a strict budget, not knowing when or if I might work again,” Fishman said of his family.

His character, DJ, lives in his own home with his wife Mary (Jayden Rey) and their children. Fishman said he related to DJ’s experience, because he also spent the pandemic focusing on his wife of 20 years, Jennifer Briner, and their 17-year-old daughter, Isabella.

“You love your family, and by now they’re driving you absolutely insane,” Fishman said. “I think it’s a tough time for everybody.”

For families that are confined together like The Conners, Fishman hopes the show can help them laugh about their frustrations. Fishman said it helped having activities together, such as cooking with Isabella and filming a movie in their home.

“You have to find your way of finding healthy ways to express yourself and to pass your time,” Fishman said. “Find small breaks, ways to take a break, ways to connect with people and focus.”

On the other hand, Goranson said she could empathize with families separated from each other by the pandemic. Goranson was unable to visit her family on the East Coast due to travel restrictions.

“I have been just totally by myself,” Goranson said. “My thoughts are very much with those people who are still at home, working alone and who miss their colleagues.”

The show will find humor in The Conners’ attempt to remain safe, and the frustrations the ongoing pandemic causes. Goranson said addressing these issues through work helped her feel a sense of purpose.

“To address some of the feelings and the things that we’ve all been going through, I feel very, very blessed,” Goranson said.

“I felt nervous coming in on the first day,” Metcalf said. “When we finally did tape a scene, dropping our mask felt very naked.”

Though the cast and crew returned to set, The Connors decided not to invite a live studio audience to tapings. Gilbert, also an executive producer, said the production team decided that testing and socially distancing an audience wasn’t worth the risk. However, Gilbert said she felt awkward performing comedy without an audience reacting to her.

“As an actor, I can feel insecure or feel like it affects my performance,” Gilbert said. “The producers swear it doesn’t, so you guys will have to judge.”

Goodman said the pandemic interrupted a lucrative period of work for him. In 2019, he starred in both The Conners and The Righteous Gemstones. The Conners’ patriarch says he has tried to enjoy the benefits of a forced break.

“It was nice to have some time off and just appreciate the things that make up my life,” Goodman said.

The Conners returns Wednesday at 9 p.m. on ABC.