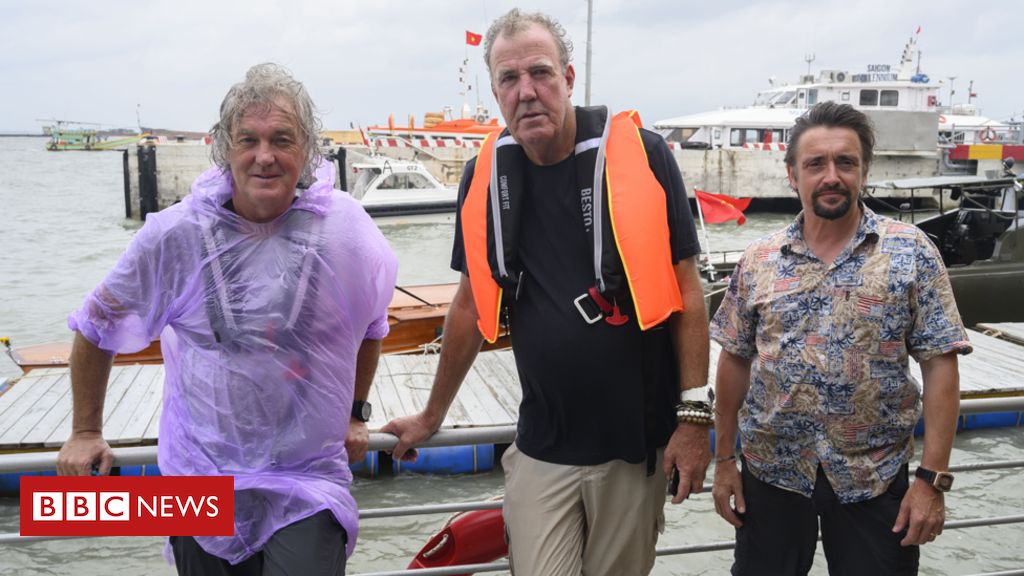 Jeremy Clarkson, Richard Hammond and James May are heading off the road and into the water for their latest special – The Grand Tour presents Seamen.

The trio are seen sailing along the Mekong river and through the treacherous conditions of monsoon season in Vietnam and Cambodia in the 90-minute film.

As you can imagine, the first obstacle at the show’s press launch is trying to get past the title.

“The Grand Tour presents Seamen,” repeats Clarkson with added emphasis. “Which, at our age, is quite an achievement.”

The switch from seatbelts to sails is just one of several changes being made to The Grand Tour’s format this time around. Here are seven other things to expect.

1. The live studio audience has gone

Having completed an initial three-season deal with Amazon, the trio is returning with a set of standalone adventure specials instead of a traditional series – Seamen being the first.

As a result, the show has done away with its huge travelling tent. Like Top Gear before it, The Grand Tour would weave various segments together with studio links which featured a live audience and celebrity guests.

“That had run its course,” Clarkson tells BBC News. “We’d done studios for 17 years, and reviewing cars and talking to somebody from Cash In The Attic about their first car we felt was perhaps something we didn’t need to do anymore.

“And then we could use the money we had spent on that on rather more elaborate plots.”

“The other thing,” executive producer Andy Wilman adds on the subject of studios, “is Amazon know to the nano-second what viewers like and don’t like.

“And it’s clear that, even though the other shows are popular, the specials rise above. So we thought ‘that fits where we want to go’.”

“But we can ask them, ‘did that work?’ And they’ll go ‘no’, because they can see how many people turn off when James May talks, and how many more people watch when I talk. So that’s very useful to us.”

The trio’s ringleader has previously had a blasé attitude to climate change and environmental campaigners dumped manure on his lawn in 2009 as part of a protest.

So perhaps the most startling thing about Seamen is hearing him acknowledge it directly.

“Climate change was very definitely rammed down our throats in Cambodia,” Clarkson says of filming this special, which sees the rivers considerably shallower than they should be.

“You can say that the Chinese have dammed the rivers and caused the problem, but it also wasn’t raining, and it should’ve been bucketing down all the time. And all the fishermen say ‘the climate is changing’. So you can’t sit there and say, ‘there’s no such thing as climate change’.

“Now, if I wanted to, I could run around the world on carbon fibre yachts, shouting and yelling and wailing,” he adds – a clear reference to the actions of the Swedish climate activist Greta Thunberg.

“Or, you can just acknowledge it, and then behind the scenes start working on how we address this problem. But we don’t offer any solutions, we’re not scientists, only scientists can come up with solutions. Politicians can’t. Weird Swedes can’t. Only scientists can.

“We just go, ‘look, there’s hardly any water in this lake, look at all these poor starving fishermen. That’s the fact, now let’s get on with making the TV show’.”

4. The team doesn’t feel restrained by its broadcaster

After the show’s third series was released, Jack Seale of The Guardian said it showed the trio were “skidding further into irrelevance”.

Indeed, part of their popularity on Top Gear was down to the fact much of what they said and did was fairly close-to-the-bone for a BBC platform. Now that they have carte blanche from Amazon, misbehaving arguably doesn’t feel quite as fun.

Wilman pushes back on this idea slightly and points out the BBC mostly stuck by them during their tenure. “When you think of the number of times we hit the headlines at Top Gear, that could only happen if the BBC were happy with what we were doing,” he says.

“The BBC always allowed us to do whatever we liked. Until [Danny] Cohen arrived,” adds Clarkson, referring to the BBC’s former director of television who, among other things, objected to Clarkson naming his black dog after the Chelsea footballer Didier Drogba.

“Make no mistake, the BBC is a fantastic and fabulous organisation, and it does allow an enormous amount of creative freedom… and Amazon are exactly the same. They might occasionally go ‘well actually’ but only in the same way the BBC would.”

5. This is their most dangerous Grand Tour adventure yet

Seamen must have been a nightmare for the health and safety department, as the trio is seen battling seriously dangerous conditions.

James May had to be rescued at one point when his boat was hit by crashing waves in the South China Sea. “Four fishermen in that area on that day were killed,” Clarkson explains.

“I think it’s the dodgiest we’ve been in since that night in Argentina,” adds Wilman, referring to the time the team faced angry protests and were pelted with rocks by locals who thought their car’s number plate was a deliberate reference to the Falklands war.

“I’d put it second to that, in terms of, ‘we have no control over what’s gonna happen next’.”

In line with most streaming services, Amazon Prime doesn’t tell anybody how many people are watching their shows – not even the stars.

“I get it from their point of view,” Wilman says. “You can’t compare to a seven-day live figure or a big overnight boost. So we could be racking up millions over time, but it’s never going to be in a defined window.

“So why would they put themselves out on the line and say ‘it got this many’ when a terrestrial show got that many? At first it was like, ‘Oh please, I’d love to know what we’re getting’, but I’m relaxed now.”

Clarkson says they’ve been able to monitor the show’s popularity anecdotally. “We were filming in Madagascar, and everybody was saying, ‘Oh Grand Tour! Grand Tour!’ so you know in Madagascar they’re all watching it,” he says. “And when we were in France, they were all saying ‘Grand Tour’. Otherwise you’d be saying, ‘Who’s watching this?’ but they obviously are.”

Since the last series aired, Top Gear has hired new presenters Paddy McGuinness and Andrew Flintoff, who have proved popular with viewers.

Instead, Clarkson says he’d like to continue with The Grand Tour for “as long as I continue to function as a human being”.

“I think there’s only six or seven countries I haven’t been to now,” Clarkson says, “and Zimbabwe is one I’d really like to go to. The BBC were banned from it so we could never go. Iran was another one, the BBC was banned so we couldn’t go to either of those two.

“Even Ski Sunday wasn’t allowed to film in Iran,” he adds.

“And they’ve got a great theme tune,” points out James May. “And they still weren’t allowed.”