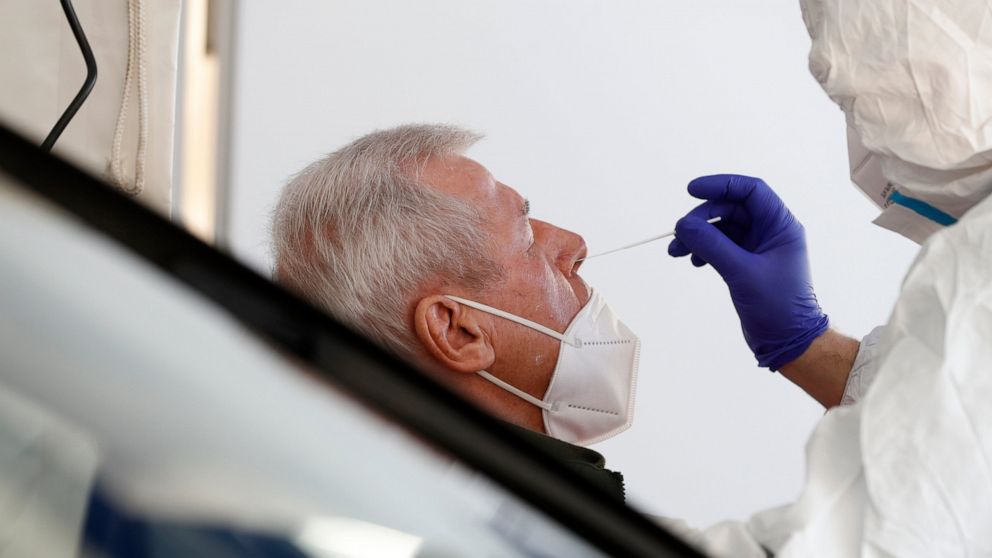 BERLIN — Austria’s leader says his country and Denmark intend to stop relying solely on the European Union for coronavirus vaccines and will work with Israel to produce second-generation vaccines.

The EU has faced criticism for its slow vaccine rollout, while Israel has vaccinated a large part of its population. Kurz said in a statement Tuesday to the Austria Press Agency that it was right in principle to take a European-wide approach to inoculations, but maintained that the European Medicines Agency has been too slow to approve vaccines and pointed to companies’ delivery shortfalls.

He added: “We must prepare for further mutations and should no longer be dependent solely on the EU in the production of second-generation vaccines.”

APA reported that Kurz said Austria and Denmark “will no longer rely on the EU in the future and will in the coming years produce doses of second-generation vaccine for further mutations of the coronavirus together with Israel as well as researching jointly treatment possibilities.”

Austria so far has vaccinated a bit under 5.5% of its population.

— Chinese vaccines sweep across the world, despite some concerns

— U.S. states press ahead with reopenings, despite warnings by health experts about the risks

— Rural, urban divide grows in the U.S. over vaccine access; both feel slighted

DUBAI, United Arab Emirates — The Saudi Ministry of Health has announced that Muslims who want to perform the annual hajj pilgrimage this year will need to prove that they’ve been vaccinated against COVID-19.

The government says it will consider coronavirus vaccination as “the main condition for participation” in the pilgrimage to Mecca that all Muslims who can are obliged to make once in their lives.

The statement did not specify whether the hajj, which traditionally draws some 2 million Muslims from across the world, would again exclude pilgrims from outside the kingdom to prevent contagion.

Last year, Saudi officials permitted only a very limited number of pilgrims already within the country to perform the hajj amid the surging pandemic. The decision dealt a devastating blow to millions of believers around the world who plan for and look forward to the trip for years.

The five-day pilgrimage starts this year at the end of July.

COLOMBO, Sri Lanka- Sri Lanka’s government said Tuesday that it has earmarked a small island off the northern coast to bury the bodies of those who die of COVID-19.

The government last month approved burials for COVID-19 victims after insisting that it may contaminate ground water. All those died of the disease were cremated, a rule resisted by many as insensitive toward religious beliefs, especially of the Muslims.

Lim Seung-kwan, a doctor who heads anti-virus efforts at Gyeonggi Province, near capital Seoul, said Tuesday at least 84 foreigners tested positive over the weekend in the city of Dongducheon, one of eight locations where the province set up testing stations for migrant workers.

Lim said Gyeonggi has also launched an inspection into the conditions at some 11,000 factories in the region that hire migrant workers and have them live in dormitories.

Health authorities have said the poor working and living conditions of migrant workers, who often live in crammed shelters with poor ventilation, would make them more vulnerable to the virus.

The infections at Dongducheon comes after more than 120 migrant workers, mostly from Asian nations including Cambodia and Nepal, tested positive following an outbreak at a plastic factory in the nearby town of Namyangju.

SAO PAULO — Brazilian health officials are urging nationwide lockdowns and curfews because hospitals are running short of intensive-care unit beds as COVID-19 claims more than 1,000 lives each day in the country.

“The return of the pandemic in several states is making their private and their public assistance networks collapse and has brought imminent risk of spreading it to all regions of Brazil,” Brazil’s National Council of Health Secretaries said Monday, adding that the nation is experiencing its worst moment since the pandemic began.

Last week was Brazil’s deadliest of the pandemic, with 8,244 deaths from the virus.

The letter from the council, which represents the nation’s 27 health secretaries, suggested lockdowns in cities where no ICU beds are available and in the rest, curfews between 8 p.m. and 6 a.m.

Less than 4% of Brazil’s population has been vaccinated against COVID-19. Almost 260,000 people have died from the disease in the South American country.

BOGOTA, Colombia — Colombia on Monday became the first country in the Americas to receive a vaccine shipment from the U.N.-backed COVAX initiative.

The program is meant to ensure inoculations against COVID-19 for the world’s most vulnerable but has been hampered by limited global supply and logistical problems.

The arrival of 117,000 doses of the Pfizer/BioNTech vaccine to the capital city of Bogota came days after the one-year anniversary of the first coronavirus case discovered in the region.

The Pan American Health Organization said it expects to increase regional vaccine access through the COVAX effort. It plans to bring about 280 million doses to the Americas and the Caribbean by the end of the year.

Colombia — Latin America’s third-largest country by population — had already began inoculations and received its first vaccine shipment in mid-February. The government has said it aims to vaccinate 35 million people this year, including hundreds of thousands of Venezuelan migrants and refugees.

TORONTO — Canada’s most populous province has started vaccinating police officers ahead of people 80 years of age and older.

A Toronto police spokesperson said Monday police constables and sergeants who respond to emergency calls where medical assistance may be required have been moved to the current phase by Ontario’s provincial government.

A police spokesperson said 2,250 of Toronto’s 5,000 officers are eligible.

The provincial government has said those 80 and above will start getting vaccinated in the third week of March but some regions of the province have already started vaccinating those residents while the province sets up a website to make appointments.

Authorities haven’t said which essential workers will be vaccinated but police started to get doses Monday.

PARIS — France will start allowing some people over 65 to receive the AstraZeneca coronavirus vaccine, after initially restricting its use to younger populations because of limited data on the drug’s effectiveness.

While France first authorized the vaccine only for medical professionals under 65, Health Minister Olivier Veran said Monday that it will soon be available to people over age 50 with health problems that make them vulnerable to COVID-19.

Veran also said that people who have had the virus in recent months will only need one injection of the two-dose Pfizer-BioNTech and Moderna vaccines. France’s High Authority for Health has argued that recent infection acts as partial protection against the virus, so a second dose isn’t essential.

France has used less than a quarter of the 1.1 million AstraZeneca vaccines it received as of Friday, according to government data. However, its vaccine campaign is expected to pick up in the coming days as more doses are delivered to family doctors and pharmacies.

Erdogan said on Monday cafes and restaurants will be allowed to reopen at half-capacity between 7:00 a.m. and 7:30 p.m. apart from those located in 17 regions that have been categorized as “very high-risk.”

Nighttime curfews during weekdays will continue across Turkey as part of the government’s “controlled normalization” program, he said.

Schools will reopen for face-to-face education in low- and medium-risk regions, Erdogan said. In other regions, only students preparing for high-school or university entrance exams will attend schools full-time.

Turkey has recorded in recent days the highest infection levels since mid-January. Overall, the country has seen more than 2.7 million known COVID-19 cases and around 28,500 virus-related deaths.

ROME — Italy’s new premier Mario Draghi has ousted a career business executive who had spearheaded the government’s coronavirus strategy, replacing him with an army general with experience in Afghanistan and Kosovo and expertise in logistics.

The country’s vaccination program has progressed more slowly than first projected. As of Monday, nearly 4 million COVID-19 vaccine doses had been administered, including to some 1.4 million people who have received a second dose. That amounts to some 69% of the vaccines delivered so far.

Vaccinations in Italy had gotten off to a rapid start after the first doses arrived in late December. But delays in manufacturers meeting delivery timetables dragged down the country’s progress.

Besides health care workers, many of the vaccines have been administered to nursing home residents, people 80 years or older and essential workers. Last week saw sharp increases in daily caseloads, especially in northern Italy. The country’s nearly 98,000 dead is Europe’s second-highest known toll, after Britain.

GENEVA — The emergencies chief of the World Health Organization said it was “premature” to think that the pandemic might be stopped by the end of the year, but the roll-out of vaccines could at least help dramatically reduce hospitalizations and death.

Dr. Michael Ryan said at a press briefing Monday that the world’s singular focus right now should be to keep transmission of COVID-19 as low as possible.

“If we’re smart,” he said, “we can finish with the hospitalizations and the deaths and the tragedy associated with this pandemic” by the end of the year. He said WHO was reassured by emerging data that many of the licensed vaccines appear to be helping curb transmission.

But Ryan warned against complacency, saying that nothing was guaranteed in an evolving epidemic. “Right now the virus is very much in control.”

Prime Minister Igor Matovic kept the purchase in secret and announced the deal Monday after a military cargo plane with 200,000 doses landed in eastern Kosice city. He said the country will get one million shots in the next two months while another million will arrive in May and June.

Matovic’s coalition government originally rejected a plan to acquire Sputnik V vaccine doses in late February after one of his four coalition partners vetoed the move.

Health Minister Marek Krajci, whose decision made the deal possible, says authorities could begin administering the vaccine in about two weeks.

Slovakia is the second European Union nation after Hungary to use the Russian vaccine, which has not been approved by the European Medicines Agency.

New York was one of the hardest-hit cities in the first wave of the pandemic a year ago, and the wail of ambulance sirens on nearly deserted streets is a memory etched in the minds of many residents.

Fauci said Monday at the White House coronavirus briefing that the New York variant appears to have been first identified in the Washington Heights area of Manhattan, on the upper end of the island. But the strain has now been documented in “multiple” New York City boroughs, the government’s top infectious disease expert added.

He said there’s heightened concern because it appears the New York mutation can evade antibody treatments given to infected patients. There is some evidence it may be able to escape antibodies generated by vaccines.