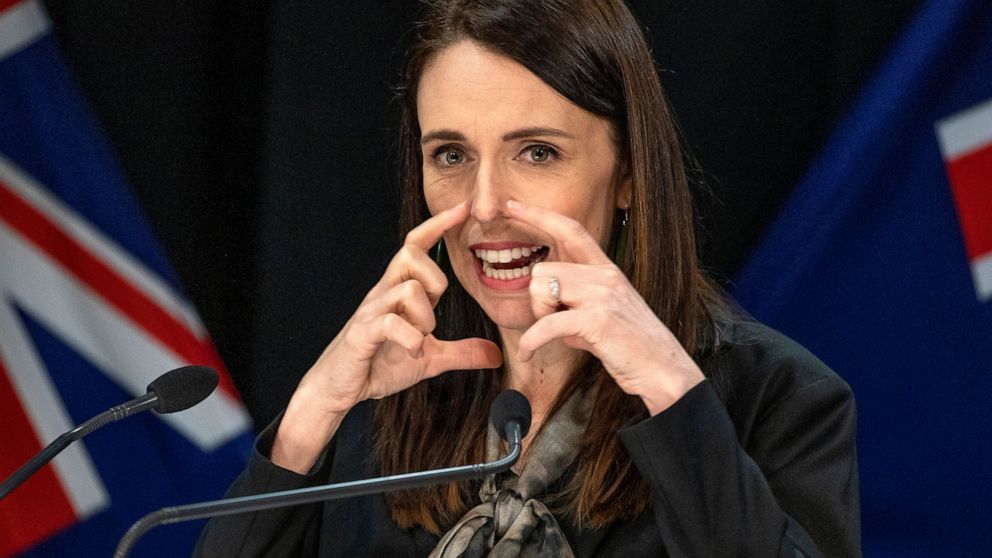 BRUSSELS — Authorities in Brussels are introducing mandatory mask rules across the Belgian capital following a spike in cases.

Brussels Minister-President Rudi Vervoort’s office said Wednesday that the number of new infections in the city had reached Belgium’s red line of 50 per 100,000 inhabitants on average over the last seven days.

A statement says the wearing of masks is from now on obligatory for all people aged 12 and over in all public places and in private places accessible to the public.

Brussels is home to the main European Union institutions and the NATO military alliance and has a population of around 1.2 million people. Mandatory masks are also in place in the port city of Antwerp.

Belgium has one of the highest COVID-19 mortality rates per capita in the world. Around 10,000 people have died in a country with a population of some 11.5 million.

HERE’S WHAT YOU NEED TO KNOW ABOUT THE VIRUS OUTBREAK:

— Science and politics tied up in global race for a vaccine

— Russia has become the first country to approve a coronavirus vaccine. The move announced Tuesday was met with international skepticism and unease because the shots have only been tested in dozens of people.

— New York’s coronavirus death toll in nursing homes, already among the highest in the nation, could actually be a significant undercount. Unlike every other state with major outbreaks, New York only counts residents who died on nursing home property and not those who died in hospitals.

— Across Africa and around the world, the COVID-19 pandemic has disrupted the supply of antiretroviral drugs to many of the more than 24 million people who take them, endangering their lives.

VATICAN CITY — Pope Francis has denounced a culture of individuality revealed by the pandemic, which has sacrificed the care of the weakest members of society.

Francis, speaking at his Wednesday audience called on the faithful to “overcome our personal and collective individualism” as experts work to find a cure for the coronavirus, “which hit us all indiscriminately.”

The pontiff said that ‘’the pandemic has revealed how vulnerable and interconnected we all are,” while also making us “more aware of the spread within our societies of a false, individualistic way of thinking, one that rejects human dignity and relationships, views persons as consumer goods and creates a ‘throw-away’ culture.”

He called on people to “look with care at our brothers and sisters, especially those who suffer,’’ and recognize “human dignity in every person, whatever their race, language or condition.”

TAIPEI, Taiwan — U.S. Health Secretary Alex Azar says the push to develop a COVID-19 vaccine is “not a race to be first.”

Azar’s comments during a visit to Taiwan on Wednesday follow Russian President Vladimir Putin’s announcement that his country was the first to approve a coronavirus vaccine, prompting doubts about the science and safety behind that purported achievement.

Azar says the U.S. is combining the powers of its government, economy and biopharmaceutical industry to “deliver as quickly as we can for the benefit of the United States’ citizens, but also for the people of the world, safe and effective vaccines.”

He says the U.S. has secured an advanced manufacturing contract for a vaccine being developed by the company Moderna and has supply agreements with five other firms who have vaccines in the works.

He says four of the six companies under contract have reported testing results showing they produce more antibodies for the virus than people who have survived COVID-19, without severe side effects.

Azar says two companies’ vaccine candidates have entered the third phase of trials while the Russian vaccine is just now embarking on that stage with no information having been disclosed.

He says the U.S. process should allow the production of a “gold-standard, safe and effective vaccine” available in the tens of millions of doses by the end of the year.

BERLIN — Germany’s heath minister expressed concern about the rising numbers of coronavirus infections in the country and called on his compatriots to adhere to social distancing and hygiene rules.

He told Deutschlandfunk radio that the infections were driven by travelers returning from abroad but also people partying or getting together for family gatherings.

He say, “This obviously — if we don’t all watch out now — can lead to a certain dynamic,” and the reemergence of the pandemic.

Germany’s Robert Koch-Institute, which tracks the coronavirus, registered 1,226 new infections on Wednesday. That’s the highest number since early May.

He says, “When there’s alcohol involved, when a festive event turns into a party, it can go very, very quickly.”

Germany has been lauded for keeping the pandemic under control for a long time, but the easing of measures and the return of travelers have in recent weeks lead to an uptick of infections. In addition, summer vacations are over in several states and students are mostly back to regular classes and don’t have to wear masks.

SINGAPORE — Singapore’s government says most foreign workers can now resume work as their dormitories have been cleared of COVID-19 after months of lockdown and virus testing.

People living in the crowded dormitories were the bulk of Singapore’s 55,353 cases. Only 27 deaths have been recorded in the city-state.

The Ministry of Manpower said in a statement late Tuesday that all the dormitories have been cleared, except for 17 standalone blocks, which serve as quarantine facilities.

It said all foreign workers living in the dormitories have either recovered or tested as virus-free, except for 22,500 workers in isolation. The majority of them are now able to return to work including 81% of the 387,000 workers in the construction, marine shipyard and process industries.

India also reported 834 deaths on Wednesday for a total of 46,091. India has the third-highest caseload after the United States and Brazil, but only the fifth-highest death toll, and authorities say the fatality rate has dropped below 2% for the first time.

Prime Minister Narendra Modi held a video conference Tuesday with the top elected officials of 10 states that together account for about 80% of India’s total cases, urging them to rigorously apply the strategies of containment, surveillance and contact tracing to drive the fatality rate below 1%.

Modi also urged testing to be ramped up in several states as it has been in the capital region of Delhi.

The Indian Council of Medical Research, India’s top medical research body, said that more than 733,000 samples were tested for COVID-19 on Tuesday, but didn’t break down how many underwent the gold standard RT-PCR test compared to the antigen test, a cheaper and more efficient though less accurate blood test that looks for antibodies.

The National Health Commission said all nine new cases were found in the northwestern region of Xinjiang, whose capital Urumqi has been at the center of China’s latest major outbreak. Another 25 cases were brought by Chinese travelers arriving from abroad.

China has largely contained the local spread of the pandemic that is believed to have originated in the central Chinese city of Wuhan late last year before spreading worldwide.

The government has recorded 4,634 deaths from COVID-19 among 84,737 cases. Hong Kong, a densely populated semi-autonomous southern Chinese city, also recorded another six deaths to bring its total to 58 among 4,181 cases.

Authorities have ordered mask wearing in public settings, restrictions on indoor dining and other social distancing measures in a bid to stem its latest outbreak. Those measures appear to have been successful in bringing numbers down from the more than 100 new daily cases reported at the end of last month.

SYDNEY, Australia — The Australian state of Victoria on Wednesday reported a record 21 virus deaths and 410 new cases from an outbreak in the city of Melbourne which has prompted authorities to impose a strict lockdown.

State Premier Daniel Andrews said 16 of the deaths were linked to aged-care facilities.

The number of new cases in Victoria is down from the peak, giving authorities some hope the outbreak is waning.

Meanwhile, three Melbourne vloggers were each fined more than $ 1,000 after posting a video to Chinese social media showing them breaching nighttime curfew rules for a McDonald’s run, the Australian Broadcasting Corporation reported.

The five-minute video, since deleted, showed the international students walking through alleys, dodging police officers and dancing inside a McDonald’s restaurant at 2:30 a.m. Sunday, the ABC said. Victoria police confirmed each of the students was fined 1,652 Australian dollars ($ 1,178).

The figures announced by South Korea’ Centers for Disease Control and Prevention Wednesday brought the national caseload to 14,714 infections, including 305 deaths.

The KCDC says 35 of the new cases were local transmissions, all but three of them reported from the densely populated Seoul metropolitan area, which has been at the center of a virus resurgence since late May.

The other 19 cases were linked to international arrivals. Health authorities have said imported cases are less threatening as they mandate tests and enforce two-week quarantines on all people arriving from abroad.

At that rate Mexico will reach a half million confirmed cases soon, but given the extremely low rate of testing — less than 1.1 million tests in a country of almost 130 million inhabitants — the number would like be a vast undercount. For the most part, only people with considerable symptoms are tested in Mexico.

RALEIGH, N.C. — North Carolina Gov. Roy Cooper has won another legal victory defending his COVID-19 executive orders, this time when a judge rejected Lt. Gov. Dan Forest’s demand that they be blocked by declaring his lawsuit as unlikely to succeed.

The Republican lieutenant governor sued Cooper last month, alleging the Democrat’s orders limiting business activities and mass gatherings and mandating face coverings were unlawful because he failed to first get support from the Council of State. The 10-member council includes both of them, Attorney General Josh Stein and other statewide elected officials.

Cooper’s state attorneys argued that the governor acted properly under portions of the Emergency Management Act that don’t require the concurrence of the council.

Cooper and Forest are running for governor this fall.

Forest said in a news release that since the judge ruled “Cooper has 100% of the power during a declared emergency,” then the governor also “has 100% of the responsibility” for the results, including permanent business closings.

Cooper has said Forest’s legal actions, if successful, could worsen case and hospitalization numbers that have recently stabilized or improved.

“Gov. Cooper has taken decisive action with health and safety measures to save lives,” spokesperson Dory MacMillan wrote in an email.

PHILADELPHIA — Philadelphia Health Commissioner Dr. Thomas Farley said he plans to tell a visiting group from the U.S. Department of Health and Human Services that long delays in getting coronavirus test results have been “very problematic” and to press them for a strategic approach to deploying a vaccine once it is available.

Long waits across the country for the results of coronavirus tests renders them virtually useless in helping to contain the spread of the virus, public health officials say.

The group is doing a site visit in Philadelphia through Thursday, part of a tour of a handful of cities around the country, Farley said.

Farley said he views the visit as a way to show what the city has been doing in terms of prevention, contact tracing and social distancing efforts.