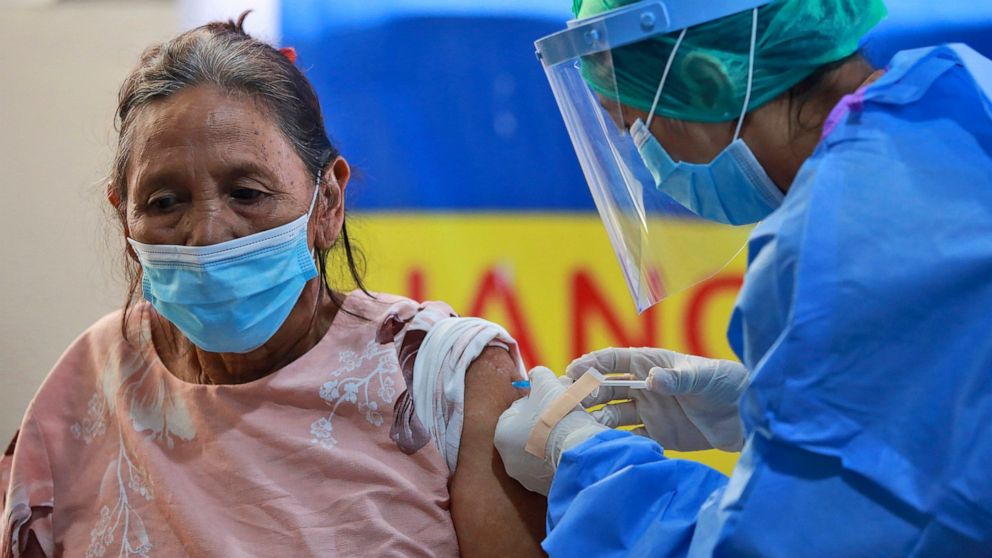 COPENHAGEN, Denmark — Norway saw a 19% drop in marriages in 2020 compared to the previous year, which had already seen the lowest figure since 1927.

Norway’s statistics agency said Monday that the pandemic and measures to counter it led to the fall. In 2020, 16,200 weddings were performed.

On top of that, “the decline of 3,000 marriages from 2019 to 2020 is unparalleled and is the largest decline from one year to another since 1919,” said Ane Margrete Toemmeraas of Statistics Norway.

“Figures show that the corona measures from March 12, 2020 caused many to postpone their wedding,” Toemmeraas said. Whether it “leads to an increase in 2021, as many of the postponed weddings may take place this year instead, will become clear later on,” she added.

— Indians minus Ramírez, Reyes after they break virus protocol

The vaccines were made by the Serum Institute of India, and arrived in the capital of Kabul aboard an Emirates flight, UNICEF said. More vaccines will arrive in the coming weeks and months.

COLOMBO, Sri Lanka— Sri Lanka’s government has ended a yearlong work-from-home program for public employees due to the pandemic.

Employees were ordered to report back to their workplaces starting Monday in order to ensure the uninterrupted delivery of public services,

At the start of the pandemic last year, the government imposed a lockdown across the island nation for more than a month, and temporarily closed some government departments.

As a precaution, a limited number of employees were allowed to go to work, while in some institutions, employees had been permitted to work from home since last April.

WELLINGTON, New Zealand — New Zealand says it will now use only the Pfizer vaccine to inoculate its population against the coronavirus, departing from earlier plans to use four different vaccines.

Prime Minister Jacinda Ardern announced the strategy Monday, saying the decision was based on the Pfizer vaccine’s effectiveness. She said this would make it easier and fairer for all New Zealanders to have access to the same vaccine.

However, the strategy may also be driven in part by delays in getting vaccines approved. So far, New Zealand’s medical regulators have approved only the Pfizer vaccine and are reviewing two other shots.

Ardern said New Zealand has purchased 10 million doses of the Pfizer vaccine, enough to inoculate all 5 million residents with the required two doses each. She said most of the doses are expected to arrive in New Zealand during the second half of this year.

New Zealand has so far completed inoculations of only a few thousand people, mainly border workers. The country has stamped out community spread of the virus, and inoculations are not considered as urgent as in many other countries.

SEOUL, South Korea — A South Korean province near the capital of Seoul has ordered local business owners and farmers to have all foreign employees tested for the coronavirus in the next 15 days, targeting tens of thousands of workers.

The mass testing campaign is the most significant step South Korean officials have taken yet to stem transmissions among migrant laborers, who often face harsh working and living conditions that health authorities say make them more vulnerable to infections.

The order also requires employees to ensure their undocumented workers get tested too. The province has encouraged these workers to come forward, saying they won’t be reported to immigration authorities if they are tested before March 22.

DETROIT — People who are homeless will be eligible for COVID-19 vaccines in Michigan starting Monday.

“Our vulnerable populations are high priority for us right now,” Ingham County Health Officer Linda Vail said, according to the Lansing State Journal. “This opens the door to make sure that population is also vaccinated and we don’t continue to have outbreaks in shelters.”

The news comes as infection rates are dropping and vaccine campaigns are ramping up.

Gov. Gretchen Whitmer recently announced the further loosening of the state’s coronavirus restrictions, easing capacity limits in restaurants and other businesses while also allowing for larger indoor and outdoor gatherings.

WASHINGTON — Dr. Anthony Fauci is projecting U.S. high school students will be able to get vaccinated early in the next school year and that elementary school students should be line for vaccinations in early 2022.

Fauci, who serves as President Joe Biden’s chief medical officer and director of the National Institutes of Allergy and Infectious Diseases, in an interview with CBS News’ “Face the Nation” predicted that vaccines for teens will be available “maybe not the first day but certainly in the early part of the fall.”

Trials are underway to determine the safety of vaccines on younger people.

Teenagers contract the coronavirus almost twice as often as younger children, according to the Centers for Disease Control and Prevention data.

BRATISLAVA, Slovakia — Slovakia has become another country to have identified a fast-spreading coronavirus variant that is believed to originate in South Africa.

Slovakia’s Health Ministry spokeswoman Zuzana Eliasova says the variant has been detected in seven samples. Four of the people returned from abroad, one of them from the African island of Zanzibar. Three have been infected at home.

Slovakia is one of the hardest-hit European Union countries. It has been recently facing a surge of another highly contagious variant found in Britain.

The number of COVID-19 patients in Slovak hospitals surpassed a record of 4,000 earlier this week.

LONDON — British children are gearing up to return to school on Monday after a two-month closure, part of what Prime Minister Boris Johnson said was a plan to get the country to “start moving closer to a sense of normality.”

As part of the plan, millions of high school and college students coming back to U.K. classrooms will be tested for the first few weeks. Authorities want to quickly detect and isolate asymptomatic cases in order to avoid sending entire schools home.

“We are being cautious in our approach so that we do not undo the progress we have made so far,” Johnson said as he urged people to get vaccinated.

High schools and colleges can reopen in phases to allow for testing. The U.K. government has distributed nearly 57 million rapid “lateral flow” test kits to schools across the country, but there are concerns about the accuracy of the tests, which may result in pupils being forced to self-isolate unnecessarily.

But Susan Hopkins, a director at Public Health England, told the BBC on Sunday that evidence from testing over the past eight weeks suggested less than 1 in 1,000 tests resulted in a false positive.

Britain has had Europe’s deadliest outbreak, with nearly 125,000 COVID-19 deaths.