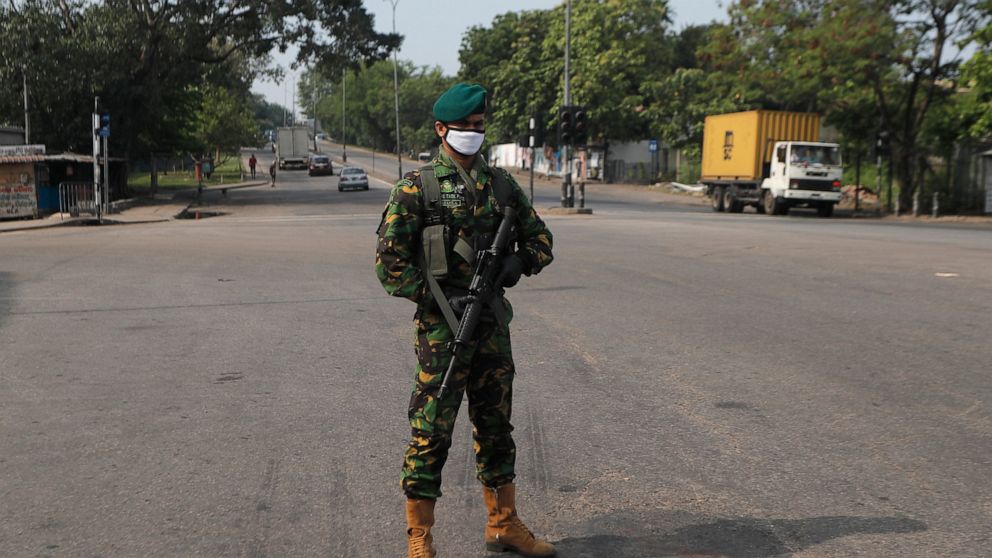 The Latest on the coronavirus pandemic. The new coronavirus causes mild or moderate symptoms for most people. For some, especially older adults and people with existing health problems, it can cause more severe illness or death.

TOP OF THE HOUR:

THE HAGUE, Netherlands — A Dutch military transport plane carrying a mobile field hospital made up of six intensive care beds is on its way to the Caribbean nation of Sint Maarten to help fight the coronavirus.

The Dutch government says the C-17 plane that left a military airbase in Eindhoven early Sunday morning was also carrying equipment to set up a further six IC beds in the semi-autonomous nation’s hospital, along with protective gear and medicines.

Dutch State Secretary for Health Paul Blokhuis says the country is closely cooperating with Sint Maarten and other Caribbean islands that make up part of the Kingdom of the Netherlands “to rein in the spread of corona as much as possible and at the same time provide the best care possible for corona patients.”

According to figures released April 2 by the government of Sint Maarten, 23 people have tested positive and two people have died in the outbreak. The half-island nation has a population of some 41,000.

LONDON — Queen Elizabeth II is expected to use a rare address to the nation to acknowledge the suffering many families have experienced because of the COVID-19 pandemic.

The monarch will offer a deeply personal message, describing the moment as a “time of disruption in the life of our country: a disruption that has brought grief to some, financial difficulties to many, and enormous changes to the daily lives of us all.”

She plans to praise the National Health Service for its work and laud those who volunteered to help out in a time of crisis.

She plans to say that she hopes in the future everyone will be able to feel “pride” in how they rose to the situation and that “those who come after us will say that the Britons of this generation were as strong as any.’’

The address was recorded in the White Drawing Room at Windsor Castle. The location was chosen specifically because it allowed enough space between the monarch and the camera person, who wore personal protective equipment.

The queen has given such an address on only three occasions before.

She delivered speeches after the Queen Mother’s death in 2002, before the funeral of Diana, Princess of Wales in 1997 and at the time of the first Gulf War in 1991.

VATICAN CITY — Pope Francis has begun the first of several Holy Week ceremonies that will be held without the public this year because of the coronavirus pandemic.

Normally, tens of thousands of Romans and pilgrims, clutching olive branches, would have flocked to an outdoor Mass led by the pontiff. Instead, Francis was leading the ceremony inside the shelter of St. Peter’s Basilica, which seemed even more cavernous than usual because it was so empty.

Besides his aides, a few invited prelates, nuns and laypeople were present, sitting solo in the first pews and staggered, so they could stay a couple of meters (yards) apart to reduce risk of contagion.

Wearing red robes and appearing pensive, Francis blessed braided palms held by the others, then held one himself. The Vatican has said there are seven cases of COVID-19 among residents or employees of the tiny independent city state.

KATHMANDU, Nepal — American nationals and permanent residents have boarded a flight out of Kathmandu in what was likely their last chance to head home as Nepal prepares to extend lockdown measures to contain the spreading of the new coronavirus.

Sunday’s flight with 303 passengers on board was the second one arranged by the U.S. embassy but paid for by the passengers.

The Qatar Airways jet is scheduled to land at Washington D.C. with a fuel stop at Doha.

Nepal’s government has halted all flights and ground transportation, shutting down offices and shuttering businesses since last month to control the spread of the coronavirus.

Nepal has nine confirmed cases including one person who has recovered but no deaths so far.

COLOMBO, Sri Lanka — Nearly 2900 prisoners have been released from overcrowded prisons in Sri Lanka as the Indian ocean island nation has stepped up it’s efforts to contain the spreading of the new coronavirus.

Sri Lanka has been under a countrywide curfew since March 20. Five people have died due to the virus and the total number of confirmed cases have risen to 166.

According to a statement from the president’s office, 2,961 prisoners have been released on bail since March 17.

Sri Lanka’s prisons are highly congested, and the president’s office said at present, there are more than 26,000 inmates while the normal capacity does not exceed 10,000.

Two inmates were killed and six others wounded last month when they scuffled with guards and some tried to escape during a protest against new strict measures to control the spread of the virus.

Prisoners protested after the government banned visitors to prevent the spreading of the virus inside prisons. Visitors often bring home-cooked food when they visit.

BEIJING — Chinese health authorities reported 30 new coronavirus cases Sunday, including 25 people who had arrived from overseas. The other five cases were in southern China’s Guangdong province, which borders Hong Kong.

China has clamped down on international arrivals, banning most foreigners from entering and limiting foreign airlines to one flight per week. Having largely stopped the spread of the disease, the fear is that infected people coming from abroad could spark new outbreaks.

The National Health Commission said that three more people had died, bringing the country’s death toll to 3,329 as of the end of Saturday. The deaths were in Wuhan, where the pandemic began and by far the hardest-hit city in China. The number of confirmed cases stood at 81,669.