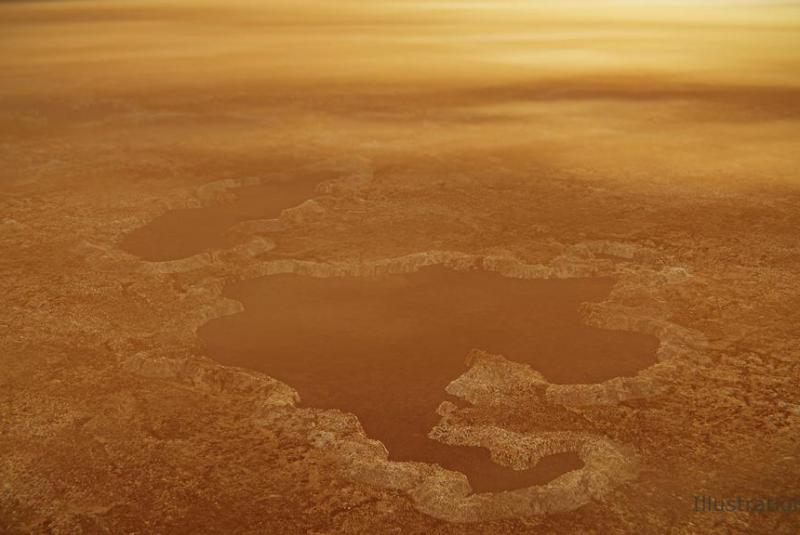 Sept. 9 (UPI) — According to a new model developed by planetary scientists in Italy and the United States, many of the methane-filled lakes on Titan were likely formed after explosions of warming nitrogen left dozens of empty craters dotting the surface of Saturn’s largest moon.

Outside of Earth, Titan is the only planetary body in the solar system known to host stable liquid on its surface. While Earth hosts bodies of water, Titan’s lakes are filled with liquid methane and ethane. On Earth, methane and ethane typically exist in gas form, but subzero temperatures on Titan allow the hydrocarbons to exist in liquid form.

Previous models suggested Titan’s lakes were formed over thousands of years as the liquid methane and ethane precipitated by Titan’s clouds dissolving the moon’s bedrock of ice and rock.

Creators of the new model acknowledged that such a scenario is plausible for some of the lakes on Titan, specifically those with sharp boundaries. These lakes resemble Earth’s karstic lakes, or karst lakes, which form as rain dissolves large cavities in limestone formations.

According to researchers, the karstic model fails to explain many of Titan’s smaller lakes, especially those that boast tall, steep rims that rise several hundred feet above sea level.

The discrepancy between the karstic model and Titan’s steep-rimmed lakes, like Winnipeg Lacus, was brought into sharp contrast by radar images collected during the final Titan flyby executed by NASA’s Cassini Saturn Orbiter.

“The rim goes up, and the karst process works in the opposite way,” Giuseppe Mitri of Italy’s G. d’Annunzio University said in a news release. “We were not finding any explanation that fit with a karstic lake basin. In reality, the morphology was more consistent with an explosion crater, where the rim is formed by the ejected material from the crater interior. It’s totally a different process.”

Mitri and his research partners in the United States worked to develop an alternative model.

Though Titan is cold compared to Earth, it’s warm compared to similarly distant worlds — thanks to its greenhouse gas atmosphere. Scientists estimate the moon has experienced alternating epochs of warm and cold temperatures. During colder periods, scientists estimate larger amounts of liquid methane and ethane rained down onto the moon’s surface. The liquid hydrocarbons likely collected to form subsurface lakes, much like melt water pools deep beneath polar glaciers.

“These lakes with steep edges, ramparts and raised rims would be a signpost of periods in Titan’s history when there was liquid nitrogen on the surface and in the crust,” said Cassini scientist Jonathan Lunine, study co-author and a researcher at Cornell University.

During periods of warming, these pockets of liquid methane and ethane could have vaporized, expanded and ultimately exploded, leaving cavities that could be filled by more liquid hydrocarbons during subsequent periods of cooling.

“This is a completely different explanation for the steep rims around those small lakes, which has been a tremendous puzzle,” said Cassini scientist Linda Spilker of NASA’s Jet Propulsion Laboratory. “As scientists continue to mine the treasure trove of Cassini data, we’ll keep putting more and more pieces of the puzzle together. Over the next decades, we will come to understand the Saturn system better and better.”