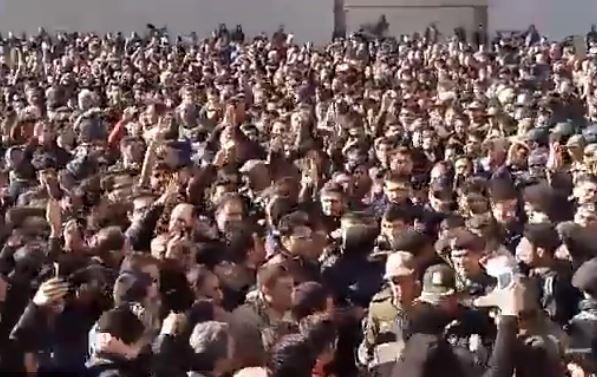 In the northern Iranian city, protesters shouted “Death to Rouhani” and “Death to the dictator” and “If you stop one case of embezzlement, our problem will be solved.”

They also held banners opposing Iran’s interference in the Arab region, including troops and funds sent to assist Syria’s government. They chanted, “Forget about Syria, think about us.”

The National Council of Resistance of Iran said forces were stationed in Mashhad but protesters pushed them away. The security forces then opened fire and launched tear gas at demonstrators. The protesters resisted, returning tear gas to the forces.

Mashhad Gov. Mohammad Norouzian said it was an “illegal” protest but security forces handled the situation “with great tolerance,” according to Iran’s state-run IRNA news agency.

Norouzian said a number of people who intended to destroy public property were arrested.

Iranian Freedom, a human rights organization, said the Revolutionary Guard and its affiliates did not intervene.

Maryam Rajavi, president-elect of the National Council of Resistance of Iran, called on all the people, especially the youth, to support Mashhad’s uprising. “The heroic uprising of today in large parts of Iran has once again proved that the overthrow of the mullahs’ regime and the establishment of democracy and the rule of people is a national and public demand,” she said in a statement.

A call for “no to high prices” protests appeared on social media.

“While the overwhelming majority of the people of Iran are suffering from poverty, inflation and unemployment, most of the country’s wealth and revenues is spent on military and security apparatuses and military and regional interventions, or is being looted by the regime leaders or goes into their bank accounts,” Rajavi said. “Therefore, so long as this regime is in power, the economic and living conditions of the people become worse and the only solution to get rid of economic and social problems is to overthrow the clerical regime.”

Prices of staples, including eggs, have risen by up to 40 percent recently, which farmers attribute to higher prices for imported feed, Iran Freedom reported.

The nation has gotten out of a recession and inflation has been reduced since the landmark 2015 nuclear deal lifted sanctions. But the official unemployment rate is 12.4 percent, up 1.4 percent from the previous year, in total population of 80 million.

#MariamRajavi: The heroic uprising of today reflects the people’s general demand to overthrow the mullahs #protest#Iran#FreeIranhttps://t.co/dGXm1jeonPpic.twitter.com/gfvXGQ05vo