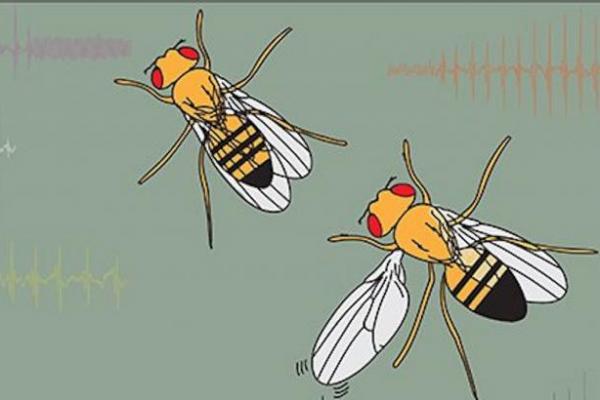 Aug. 24 (UPI) — Fruit flies are agile fliers. Evading the swat of a human hand is easy. But for males, wings aren’t just a tool for travel and evasion. They’re an instrument — an instrument the would-be dads use to woo females.

With the help of powerful microphones and neuron tracking technology, scientists at Aarhus University in Denmark identified the song motor circuit male fruit flies depend on for reproductive success.

To most, the tiny fruit fly is nothing more than a nuisance. But for researchers, especially neuroscientists, the fruit fly is the perfect model. Scientists have used the fruit fly and its 200,000 brain neurons to gain insight into the mysteries of genetics, neural development, disease and more.

A combination of advanced acoustic and imaging technologies allowed scientists to identify links between acoustic signals and shifts in the frequency of a fly’s beating wings. The analysis revealed song structures, and observation of courting rituals helped researchers grade a fly’s vocal performance.

In followup experiments, scientists silenced different motor control neurons to identify which circuits are most important for a fly’s singing abilities. The tests showed that some neuronal circuits promote the use of a fly’s wings for both flight and singing, some are unique to specific tasks.

Researchers published their findings this week in the journal Current Biology.

“Many questions remain unanswered regarding this innate behavior, but with continued research we will learn a lot more and in the process uncover new knowledge on how brains in general function, which in the longer term may have medical significance,” researchers wrote in a news release.