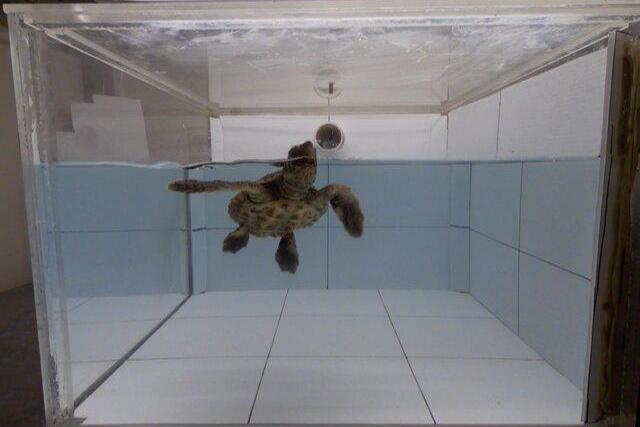 March 9 (UPI) — Sea turtles are drawn to stinky plastic because it smells like food, according to new research. Their affinity for the aroma of plastic waste, described Monday in the journal Current Biology, could explain why the marine reptiles are so susceptible to pollution.

“We found that loggerhead sea turtles respond to odors from biofouled plastics in the same way they respond to food odorants, suggesting that turtles may be attracted to plastic debris not only by the way it looks, but by the way it smells,” lead study author Joseph Pfaller, marine biologist and sea turtle expert at the University of Florida, said in a news release. “This ‘olfactory trap’ might help explain why sea turtles ingest and become entangled in plastic so frequently.”

Previous studies have suggested some marine species eat plastic debris because it looks similar to their natural food. But the latest findings suggest the funky smells of plastic can also fool hungry animals.

The wet, flat surface of plastic debris serves as a landing platform for microbes, algae, plants and small animals, all of which can anchor and grow, giving off the kind of odors that make sea turtles salivate.

The tested turtles also kept their nostrils out of the water to get a good, long sniff of the odorrants produced by biofouled plastic. The turtles were much less interested in the smell of clean plastic.

“We were surprised that turtles responded to odors from biofouled plastic with the same intensity as their food,” Pfaller said. “We expected them to respond to both to a greater extent than the control treatments, but the turtles know the smell of their food since they’ve been smelling and eating it in captivity for 5 months. I expected their responses to food to be stronger.”

Researchers plan to conduct followup studies to find out which chemicals emitted by biofouled plastic are most alluring to turtles.

“The plastic problem in the ocean is more complex than plastic bags that look like jellyfish or the errant straw stuck in a turtle’s nose,” Pfaller said. “These are important and troubling pieces to the puzzle, and all plastics pose dangers to turtles.”