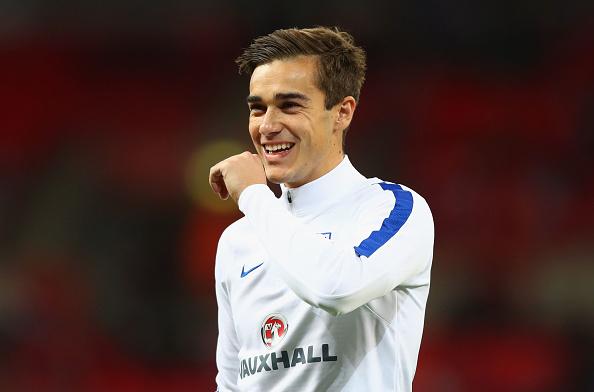 Harry Winks made his debut for England on Sunday

Harry Winks has thanked Mauricio Pochettino for continuing to place his trust in young English talent.

Winks made his England debut in Sunday’s 1-0 win over Lithuania, turning in an eye-catching performance in midfield despite having only four Premier League starts under his belt.

His integration in the first-team picture has been carefully handled by Pochettino, whose show of faith has helped spur the likes of Harry Kane, Dele Alli, Eric Dier and Danny Rose into the senior set-up.

Winks is now angling to join his club-mates at next summer’s World Cup and lays the credit at the door of his Argentinian boss.

“It’s well known English players struggle to get opportunities in the Premier League, which is difficult for us,” he said.

“Fortunately for me he’s given me my chance and I can’t thank him enough for that.

“It’s brave for the manager to do it but we have to justify that decision and I think I can say I’ve done that.”

Winks, 21, praised Pochettino’s holistic approach, spending as much time on his players’ mentality as their football skills.

“Not only has he helped me physically and technically but he’s helped mentally as well, that’s something I can thank him for as well,” he said.

“He’s a top manager and a top man as well. He’s someone who’s always there to give advice and help you. He just breeds confidence around the camp.”