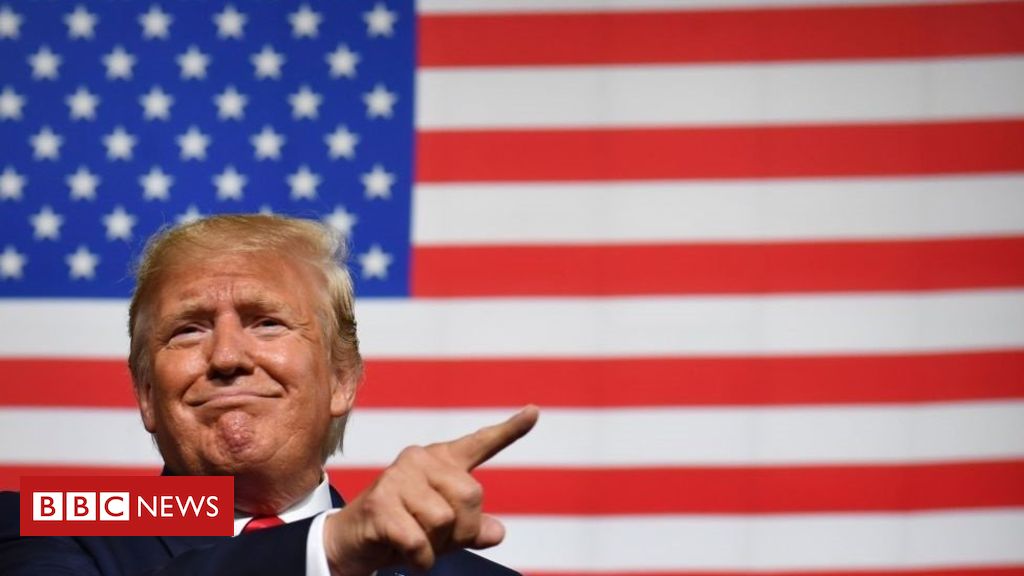 Donald Trump has tried to reassure markets about the risk of the US falling into a recession by saying the economy is doing “tremendously well”.

The US president said he did not see a recession – usually defined as when an economy shrinks for two consecutive quarters.

Last week, financial markets indicated a recession could be on the way.

This is because it became cheaper for the US government to borrow for 10 years, rather than two.

This “inverted yield curve” often comes before a recession, or at least a significant slowdown in economic growth.

However, speaking to reporters on Sunday, Mr Trump said: “I don’t see a recession. The world is in recession right now.

“I don’t think we’re having a recession. We’re doing tremendously well, our consumers are rich, I gave a tremendous tax cut, and they’re loaded up with money”.

He pointed to last week’s healthy profits from Walmart, the US retailer often described as the world’s biggest, and pointed to a strong performance from US consumers.

“Most economists actually say we are not going to have a recession. Most of them are saying we will not have a recession, but the rest of the world is not doing well like we are doing.”

‘No recession in sight’

His remarks came after Mr Kudlow had told Fox News Sunday that the US economy remained “in pretty good shape”.

“There is no recession in sight,” Mr Kudlow said. “Consumers are working. Their wages are rising. They are spending and they are saving.”

Markets around the world were rattled last week by the movement in the bond markets, which also knocked stock markets.

On Wednesday last week, US stock markets fell by about 3% when the yield curve inverted, although they had recovered lost ground by the end of the week.

Last month, the US Federal Reserve cut interest rates for the first time since 2008, and more cuts are expected. Janus Henderson’s Laura Foll told the BBC’s Today Programme that the US central bank was “responding to global events” such as the contraction in both the UK and German economies during the second quarter.

The US economy also slowed last quarter, growing by 0.5% – its weakest performance in more than two years.

The US President has published about 40 tweets either criticising Fed chairman Jerome Powell or pushing for a rate cut.

“Of course, it is really hard to know how much of an effect Trump is having,” Ms Foll said.

“I don’t think you can rule out the extreme pressure the Fed is under from Trump, but it is really hard to know how much of a direct knock-on effect that is having on policy.”