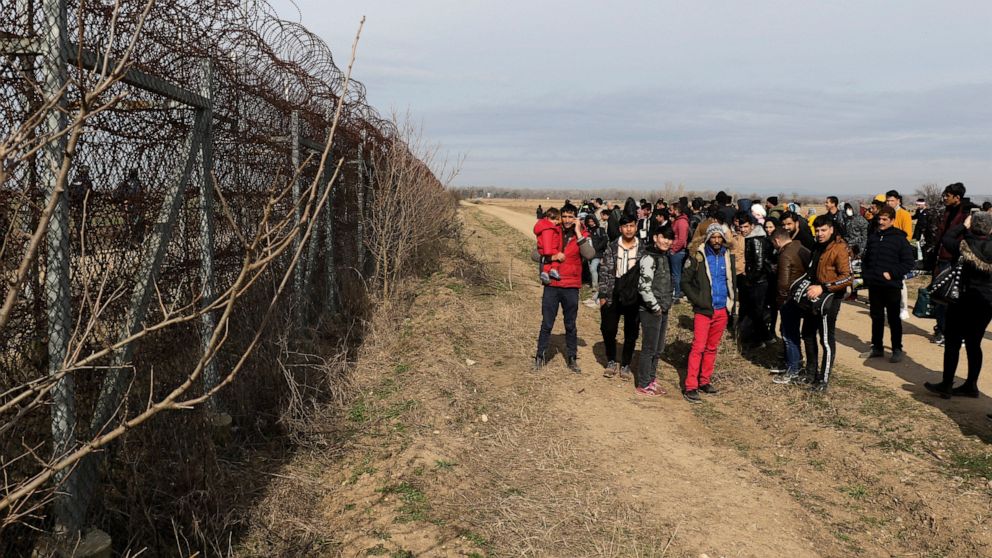 ANKARA, Turkey — Turkish President Recep Tayyip Erdogan said Saturday that his country’s borders with Europe were open, as thousands of refugees gathered at the frontier with Greece.

Migrants played a cat-and-mouse game with Greek border patrols throughout the night and into Saturday, with some cutting holes in the fence only to be turned back by tear gas and stun grenades. Greek authorities also fired tear gas to repulse attempts by the crowd to push through the border.

The move by Turkey to open its border, first announced Thursday, was seen in Greece as a deliberate attempt to pressure European countries. It comes as tensions ratcheted up between Turkey and Syria. More than 55 Turkish troops have been killed since Turkey began sending further reinforcements into areas of northwest Syria under the control of rebels, which are backed by Turkey.

“We will not close the gates to refugees,” Erdogan said in a speech in Istanbul. “The European Union has to keep its promises.”

If Erdogan really has opened the border, it would be a dramatic departure from Turkey’s current policy. Under a 2016 deal, Turkey agreed to stem the tide of refugees to Europe in return for financial aid. It has since protested that the EU has failed to honor the agreement.

Erdogan was speaking for the first time since 33 Turkish soldiers were killed in air strikes in northwest Syria on Thursday, the largest single loss of life for Turkish forces since their country became involved in Syria in 2016.

Turkey currently hosts more than 3.5 million Syrian refugees, and many fleeing war and poverty in Asia, Africa and the Middle East use it as a staging post and transit point to reach Europe, usually through neighboring Greece.

On Saturday, small groups managed to get across into Greece clandestinely. The vast majority were from Afghanistan, and most were men, although there were also some families with young children. They took shelter during the night in abandoned buildings or small chapels in the Greek countryside before starting to walk towards northern Greek.

Erdogan has frequently threatened to “open the gates” and allow refugees and migrants to head to Europe unless more international support was provided, particularly at times of tension with European countries.

Thursday’s deaths — the highest number in a single day since Turkey first intervened in Syria in 2016 — were the most serious escalation between Turkish and Russian-backed Syrian forces. The development has raised the prospect of an all-out war with millions of Syrian civilians trapped in the middle.

Syrian government forces have been on a weekslong offensive into Idlib province, the country’s last rebel stronghold, which borders Turkey. Thousands of Turkish soldiers are deployed inside rebel-controlled areas of Idlib province, which is dominated by al-Qaida-linked militants.

The Idlib offensive has pushed nearly 950,000 displaced civilians toward the Syrian-Turkish border amid cold winter weather.

“We learnt the border was open and we headed there. But we saw it was closed, and we found a hole in the fence and went through it,” said Ali Nikad, a 17-year-old Iranian who made it into Greece overnight with a group of friends.

Nikad said he had spent two months in Turkey but couldn’t make ends meet, and was hoping to find his uncle who was already in Greece.

Many of those who made it across the land border were seen being arrested and driven away in white vans.

A police officer told The Associated Press there was pressure along the 200-kilometer (125-mile) land border from migrants trying to force their way through overnight, and groups were being constantly repulsed. The officer spoke on condition of anonymity as he was not authorized to speak on the record.

Others were making their way to Greek islands in dinghies from the nearby Turkish coast.

In Syria, Turkey’s Defense Ministry said one of its soldiers was killed and two were injured by Syrian government shelling, the latest fatality after the deadly airstrike that killed 33 earlier this week.

It remained unclear whether Syrian or Russian jets carried out the airstrike, but Russia denied its aircraft were responsible.

Erdogan had given the Syrian government until the end of the month to pull back from areas captured in Idlib, threatening large-scale military action if they didn’t. But any large scale Turkish military action risks more loss of life among Turkish soldiers. He had kept unusually silent since the 33 deaths.

Erdogan and Russian President Vladimir Putin spoke by telephone Friday and discussed implementing agreements in Idlib, the Kremlin said. Fahrettin Altun, Erdogan’s director of communications, said they had agreed to meet “as soon as possible.”

U.N. Secretary-General Antonio Guterres called for an immediate cease-fire in Idlib. He warned that “without urgent action, the risk of even greater escalation grows by the hour, and as always, civilians are paying the gravest price.”

Kantouris reported from Kastanies, Greece. Elena Becatoros in Athens contributed to this report.