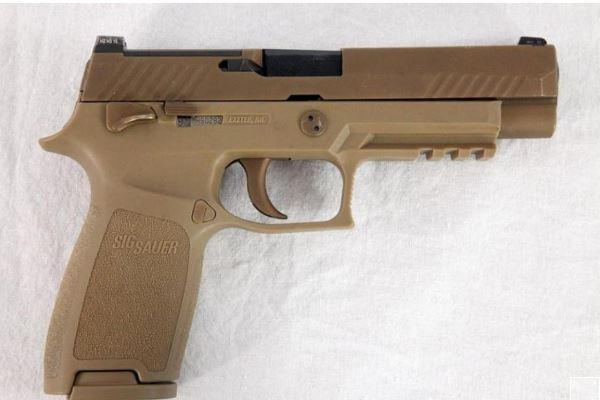 July 10 (UPI) — The new M17 and M18 handguns of Sig Sauer Inc. received full-material release notification from the U.S. Army, the company said, the final stamp of approval for military use.

“Full-material release is a significant milestone for the MHS [Modular Handgun System] program and is the official determination that the U.S. Army has rigorously tested and evaluated the M17 and M18 handguns, and associated ammunition, to determine it as safe for use when operated within its stated parameters,” a statement from the New Hampshire-based company said on Tuesday.

The U.S. Marine Corps adopted the new standard-issue pistol in June, a change in armament for the first time in 30 years. The M18 will replace the Beretta M9 starting in 2020. All branches of the U.S. military have now approved the new handgun.

The M18 is a 9mm, striker-fired pistol, tan in color, with a stainless steel slide. It is equipped with front night sights and removable night sight rear plate, as well as a manual safety. It was developed my Sig Sauer in conjunction with Winchester Ammunition.

The M17 offers the similar features but its barrel is about one inch shorter.

The contract announced last week includes a stipulation that Army generals will receive specially-built pistols, referred to as GO handguns.

GO handguns are “essentially an M18 with a distinguished serial number,” Samantha Piatt of Sig Sauer said. “Additionally, each GO handgun is supplied with a large and small grip module in addition to the medium grip module it is configured with upon delivery.”