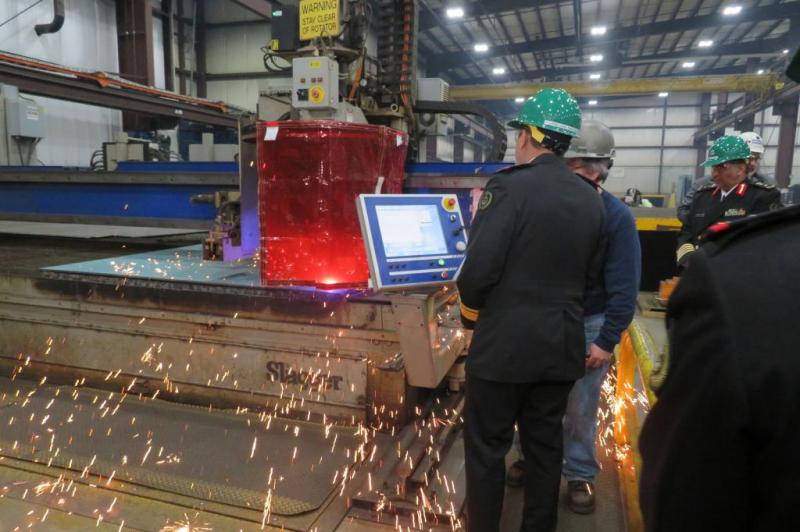 A “cut steel” ceremony was held Oct. 24 at Fincantieri Marinette Marine in Marinette, Wisc., which constitutes the start of construction on the first of Saudi Arabia’s MMSC vessels, Naval Sea Systems Command announced this week.

Representatives of both the U.S. Navy and Royal Navy Saudi Forces attended the ceremony at the FMM facility where the company has been working on the vessel. A bipartisan group of Wisconsin lawmakers — including Marinette mayor Steve Genisot, U.S. Sen. Tammy Baldwin, D-Wisc., U.S. Rep. Mike Gallagher, R-Wisc., and Democratic Wisconsin state Sen. Dave Hansen.

Lockheed Martin is the prime contractor for the 4,409-ton tailored littoral combat ship variant and will work in partnership with FMM to build the ship, the first of which will eventually be christened the HMS Saud.

Todd Tompkins, program manager for the U.S. Navy’s International Small Combatants Program Office (PMS 525), noted during the ceremony that, “in this shipyard that has produced so many U.S. Navy Freedom-variant littoral combat ships, the MMSC is the first ship based on an LCS variant to be built for a foreign partner.”

He added that “this event marks the culmination of years of collaboration between our countries.”

The launch comes almost exactly a year after Lockheed Martin was awarded $ 282 million for design for MMSCs for Saudi Arabia, and four years after Saudia Arabia was approved for an $ 11.25 billion combat ship deal.