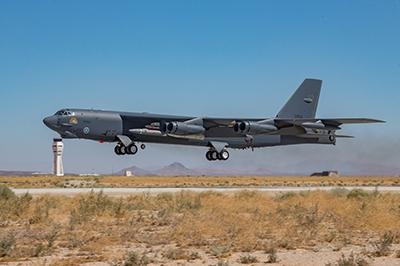 Aug. 10 (UPI) — The U.S. Air Force and Lockheed Martin said Monday have completed the second successful hypersonic air-to-ground weapon test on a B-52 Stratofortress bomber out of Edwards Air Force Base, Calif..

The first sensor-only prototype of AGM-183A ARRW was carried externally by a B-52 during a successful flight test last year. Officials said at the time they had set an accelerated development schedule for the weapon system.

“We are in a competition and we must remain diligent in our efforts to stay ahead of our adversaries who are vigorously pursuing similar weapon systems,” Gen. Arnold W. Bunch, Jr., Air Force Materiel Command commander, said in a statement.

“Across the enterprise, our research, acquisition and testing communities are well-coordinated to deliver critical hypersonic capabilities to the nation,” Bunch said.

Hypersonic weapons can travel at five times the speed of sound or higher, denoted as Mach 5 and above, making them more difficult to intercept or defense against, military officials have said.

“The team overcame significant challenges driven by the COVID-19 pandemic to achieve this significant milestone for the program,” Dave Berganini, ARRW program director at Lockheed Martin Missiles and Fire Control, said in a statement. “This captive carry mission is the precurser for our fire booster test flight planned for early 2020s.”