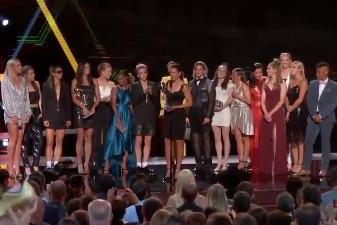 The team had just landed in Los Angeles a few hours after completing their victory parade in New York City when they beat out the NFL’s New England Patriots, the Toronto Raptors of the NBA, baseball’s Boston Red Sox and NCAA football‘s Clemson Tigers for the award.

“We literally just got off a plane a couple of hours ago,” said Carli Lloyd on accepting the award from actress Sandra Bullock. “Got hair and makeup in the plane and we look pretty fabulous.”

She then thanked their worldwide fans for their support.

“It’s been an incredible journey. Super proud of all these 22 fabulous ladies, so props to you but thank you so much and here’s to the next World Cup in the next four years,” she said.

Best Male Athlete went to Giannis Antetokounmpo of the Milwaukee Bucks. The star forward will now be able to add his ESPY to his 2018-19 MVP statue.

“This is not going to be like the MVP speech,” he joked to the crowd on accepting the award. “I’m not going to try today.”

The Greece native said as a kid he never thought he’d win the coveted award but with perseverance and hard work, dreams can come true.

“This is all about hard work and when you believe in your dreams, things like this can happen,” he said.

Alex Morgan of the U.S. women’s soccer team picked up Best Female Athlete and joked that it was “probably the second best trophy we’ve won this week.”

“I think about the greats that have won this award in the past and I’m just so honored to follow in their amazing footsteps,” she said. “They not only won championships and countless records but were an inspiration to so many, including me, as I dreamt of playing the sport I love.”

She said it is important to be surrounded by the best, supporting people and she is fortunate to have her family and “22 best friends” around her, she said of her team.

The event was hosted by Tracy Morgan and included presenters Joel McHale, Elle Fanning, Usher and Chris Long, among others.