British telecoms providers will be banned from installing 5G equipment manufactured by Huawei from next September, the government has said, even if they still have unused stock.

Although British companies were already set to be banned from purchasing new equipment from the end of this year, the new rules will address concerns that radio equipment was being stockpiled to be installed at a later date.

In the Commons today, Digital Secretary Oliver Dowden will set out the government’s roadmap for removing all Huawei equipment from the UK’s 5G networks by 2027 in the second reading of the Telecommunications (Security) Bill, which will make the ban lawful.

The move comes as backbench MPs, including those in the Conservative Party’s China Research Group, have called for the government to adopt a hardline approach to the company.

Mr Dowden will say the bill provides the government with “new and unprecedented powers to identify and ban telecoms equipment which poses a threat to our national security”.

Although the ban was brought in on security grounds, according to the UK’s National Cyber Security Centre (NCSC) the dependence on just two suppliers introduces a significant risk for the long-term security of UK networks.

The government has also announced it will spend an initial £250m to diversify this marketplace, with a new task force working to find a supplier capable of filling the void left by the ban within the UK’s 5G infrastructure.

The security provided by a more diverse marketplace was the main reason NCSC gave for initially assessing that Britain’s 5G networks were safer for including Huawei equipment as well as that manufactured by Ericsson and Nokia.

However, following a decision by the White House to ban American companies from providing computer chips to Huawei – potentially pushing it to adopt chips produced by less trusted manufacturers – the NCSC was forced to upgrade the risk posed by Huawei equipment.

The US sanctions were criticised as “arbitrary and pernicious” by Huawei, which has confirmed that 40% of the roles within its enterprise business group in the UK are being made redundant as a result. 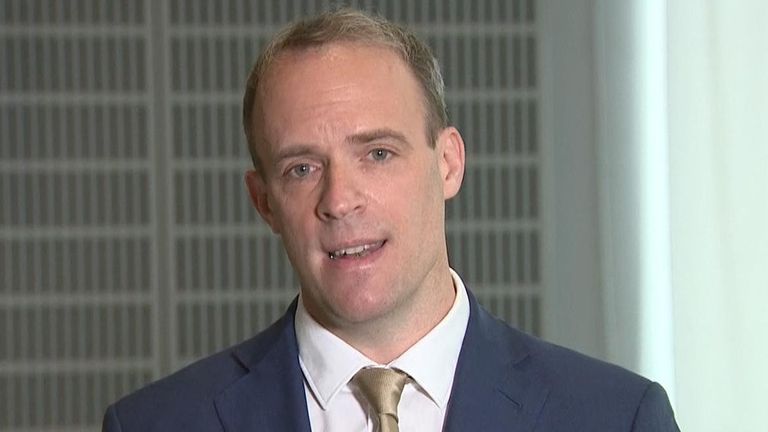 Raab: No return to normal relations with China

As part of the diversification strategy, the roadmap also sets out government funding for a new trial with the Japanese technology giant NEC, which will trial an Open RAN system in Wales in 2021.

Open RAN is a movement within the telecommunications industry that would allow telecoms providers to use different hardware providers in the radio access network, for instance allowing Nokia antennae to be used with Ericsson base stations.

A new secure research facility will be established for a National Telecoms Lab, the government’s strategy will also state, where industry, academia and the government can work together on research.