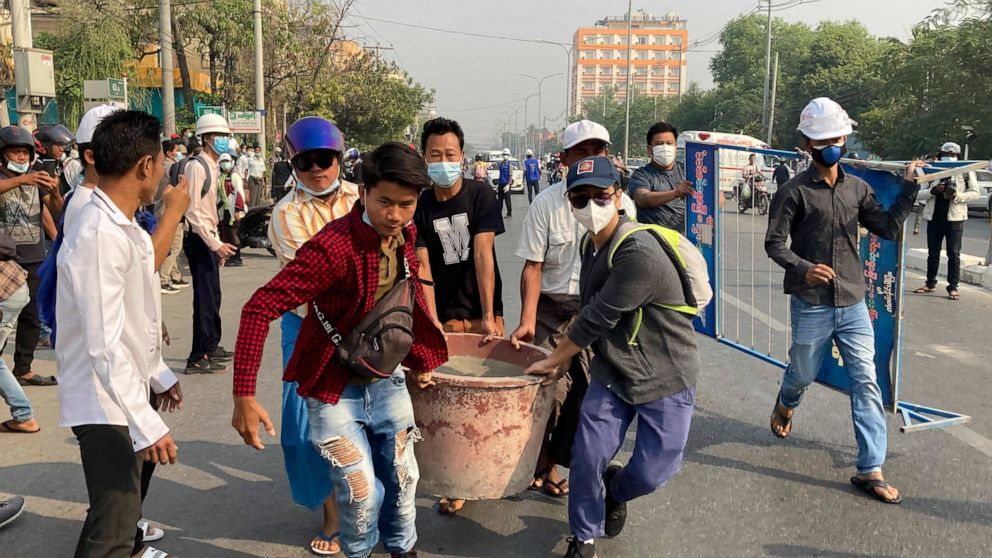 YANGON, Myanmar — Security forces in Myanmar opened fire and made mass arrests Sunday as they sought to break up protests against the military’s seizure of power, and a U.N. human rights official said it had “credible information” that at least 18 people were killed and 30 were wounded.

That would be the highest single-day death toll among protesters who are demanding that the elected government of Aung San Suu Kyi be restored to power after being ousted by a Feb. 1 coup. About 1,000 people are believed to have been detained Sunday.

“The secretary-general urges the international community to come together and send a clear signal to the military that it must respect the will of the people of Myanmar as expressed through the election and stop the repression,” Dujarric said.

An Associated Press journalist was taken into police custody on Saturday morning while providing news coverage of the protests. The journalist, Thein Zaw, remains in police custody.

The AP called for his immediate release.

“Independent journalists must be allowed to freely and safely report the news without fear of retribution. AP decries in the strongest terms the arbitrary detention of Thein Zaw,” said Ian Phillips, AP vice president for international news.

The Foreign Correspondents Club of Myanmar also condemned the arrest.

The Democratic Voice of Burma reported that as of 5 p.m. in Myanmar, there had been 19 confirmed deaths in nine cities, with another 10 deaths unconfirmed. The independent media company broadcasts on satellite and digital terrestrial television, as well as online.

DVB counted five deaths in Yangon and two in Mandalay, the largest and second-largest cities.

It registered five deaths in Dawei, a much smaller city in southeastern Myanmar that has seen tens of thousands of protesters nearly every day since the coup. Witnesses said Sunday’s march was also large and people were determined not to be driven off the streets.

Confirming the deaths of protesters has been difficult amid the chaos and general lack of news from official sources, especially in areas outside Yangon, Mandalay and the capital of Naypyitaw. But in many cases, photos and video circulated showed circumstances of the killings and gruesome photos of bodies.

The independent Assistance Association of Political Prisoners reported it was aware that about 1,000 people were detained Sunday, of whom they were able to identify 270. That brought to 1,132 the total number of people the group has confirmed being arrested, charged or sentenced since the coup.

Gunfire was reported almost as soon the protests began Sunday morning in Yangon, as police also fired tear gas and water cannons while trying to clear the streets. Photos of shell casings from live ammunition used in assault rifles were posted on social media.

Initial reports on social media identified one young man believed to have been killed. His body was shown in photos and videos lying on a sidewalk until other protesters carried him away.

In Dawei, local media reported at least three people were killed during a protest march, supported by photos and video. Photos on social media showed one wounded man in the care of medical personnel.

Before Sunday, there had been eight confirmed reports of killings linked to the army’s takeover, according to the independent Assistance Association of Political Prisoners.

The Feb. 1 coup reversed years of slow progress toward democracy after five decades of military rule. Suu Kyi’s National League for Democracy party would have been installed for a second five-year term in office, but the army blocked Parliament from convening and detained her and President Win Myint, as well as other top members of Suu Kyi’s government.

On Sunday morning, medical students marched in Yangon near the Hledan Center intersection, which has become the gathering point for protesters who then fan out to other parts of the city.

Videos and photos showed protesters running as police charged at them, and residents setting up makeshift roadblocks to slow their advance. Some protesters managed to throw tear gas canisters back at police. Nearby, residents were pleading with police to release those they picked up from the street and shoved into police trucks to be taken away. Dozens or more were believed to be detained.

“The world is watching the actions of the Myanmar military junta, and will hold them accountable,” said Phil Robertson, deputy Asia director for New York-based Human Rights Watch. “Live ammunition should not be used to control or disperse protests and lethal force can only be used to protect life or prevent serious injury.”

Security forces began employing rougher tactics on Saturday, taking preemptive actions to break up protests and making scores, if not hundreds, of arrests. Greater numbers of soldiers also joined police. Many of those detained were taken to Insein Prison in Yangon’s northern outskirts, historically notorious for holding political prisoners.

According to the Assistance Association of Political Prisoners, as of Saturday, 854 people had been arrested, charged or sentenced at one point in relation to the coup, and 771 were being detained or sought for arrest. The group said that while it had documented 75 new arrests, it understood that hundreds of other people were also picked up Saturday in Yangon and elsewhere.